by John Perritano
Exercise is great, stinky sweat not as much. Jupiterimages/Stockbyte/Thinkstock

I was looking through my "Too Much Information" file the other day and came across an old folder titled "The Case of the Stinky Reporter." Pat and I worked together for ages. I took his job at a one-person newspaper bureau when he moved to the main office. The bureau was slightly larger than a coffin. It trapped all sorts of smells.

Pat lived in town, and you'd often see him jogging. He ran mile after sweaty mile, day after smelly day. He'd often run to my office after his workout and want to chat. "Can you go home and take a shower?" I'd remind him. Pat would laugh and continue talking. While I liked Pat, he was a one-person skunk fest, able to knock a fly off a manure truck. I tell you this because sweating and body odor are unpleasant facts.

Humans cool down by sweating. When we start to overheat, some of our sweat glands release a watery substance onto the skin. When the moisture evaporates, you're as cool as cucumber and, perhaps, as odoriferous as an old sock.

Sweat is a curious thing. If you ran a few miles, wiped a bit of perspiration from your brow and held it to your nose, it wouldn't smell. But swipe your underarm and sniff? You stink. Unbelievably, sweat itself doesn't usually smell, at least not initially. So what does? We're about to tell you.

Humans have two main types of sweat glands. Eccrine glands cover most of the body and produce a salty, watery sweat. You likely have between 2 and 5 million of them [source: Encyclopaedia Britannica]. Apocrine glands are found typically under our armpits and groin. They grow and begin to function after puberty. Apocrine glands secrete a milky type of sweat, the main ingredient of which is water, along with proteins, lipids, fatty acids, cholesterols and iron-containing salts [sources: Yamazaki et al.].

When all that sweat encounters the bacteria brimming on your skin, odors start to rise. The bacteria, such as Staphylococcus epidermis and S. aureus, break down the sweat and generate smelly byproducts. So, in a sense, we cheated a bit on this one. The bacteria don't pose the problem, the byproducts do. We'll get to a few of them, too.

Eggs have been called the perfect protein. Are they or other protein sources responsible for you smelling like ammonia after you work out? TuelekZa/iStock/Thinkstock

Why is it that some people smell like cleaning liquid after a heavy workout? That's because their bodies are processing protein.

When, say, a weightlifter eats a protein-rich diet and exercises afterward, that person's body may turn the proteins into energy. How? By ditching the nitrogen and transforming the remaining molecule into glucose, which the body uses for fuel. The nitrogen, in turn, may then combine to form ammonia, which we can expel as urea through urine. We can also sweat it out [source: Likness].

If your sweat stinks of ammonia, you may want to try to up your carb intake and, of course, see your doctor.

That guy actually seems pumped about his armpit. galaxy67/iStock/Thinkstock

For years, scientists have been studying why armpits are so vile. Along with all the bacteria and apocrine, eccrine and hair glands present under the crook of your arm, underarm sweat contains androstenone and other steroids. Androstenone is found in both males and females, and, for what it's worth, boar saliva.

In humans, androstenone produces a rather unpleasant musky, woody smell. It's also associated with the scent of urine [sources: Yamazaki et al., Araneda and Firestein]. On the flip side, some folks perceive its scent as sweet and floral, and still other sniffers can't smell it at all [source: Araneda and Firestein].

Those kicks may be old friends, but whew. Torsten Schon/Hemera/Thinkstock

Bacteria really go wild for foot sweat. Foot odor is often pungent, and shoes and socks provide a delectable feeding ground for bacteria that chow down on the sweat and waste matter emitted by the sole of the foot.

Scientists who study foot odor (and there are many) have found high levels of fatty acids in those with very smelly feet. The main culprit seems to be isovaleric acid, a short-chain fatty acid usually found in cheese and beer. In general, sweat also contains propionic acid, another fatty acid that smells strongly of vinegar [source: Yamazaki et al.].

Our skin may generate as many as 100 different volatile organic compounds. clownbusiness/iStock/Thinkstock

Although not a component of sweat, what's on your skin is also responsible for why you smell. In fact, there are 100 different volatile organic compounds on human skin, the largest organ on your body. One is benzothiazole, a smelly sulfur compound often used as a food additive. Scent scientists suspect that the concentration of these compounds varies with age. [sources: Ara et al., Monell Center].

Beyond the science of stink, eventually all those VOCs emanating from skin may signal health problems, if we develop the technology to detect them. 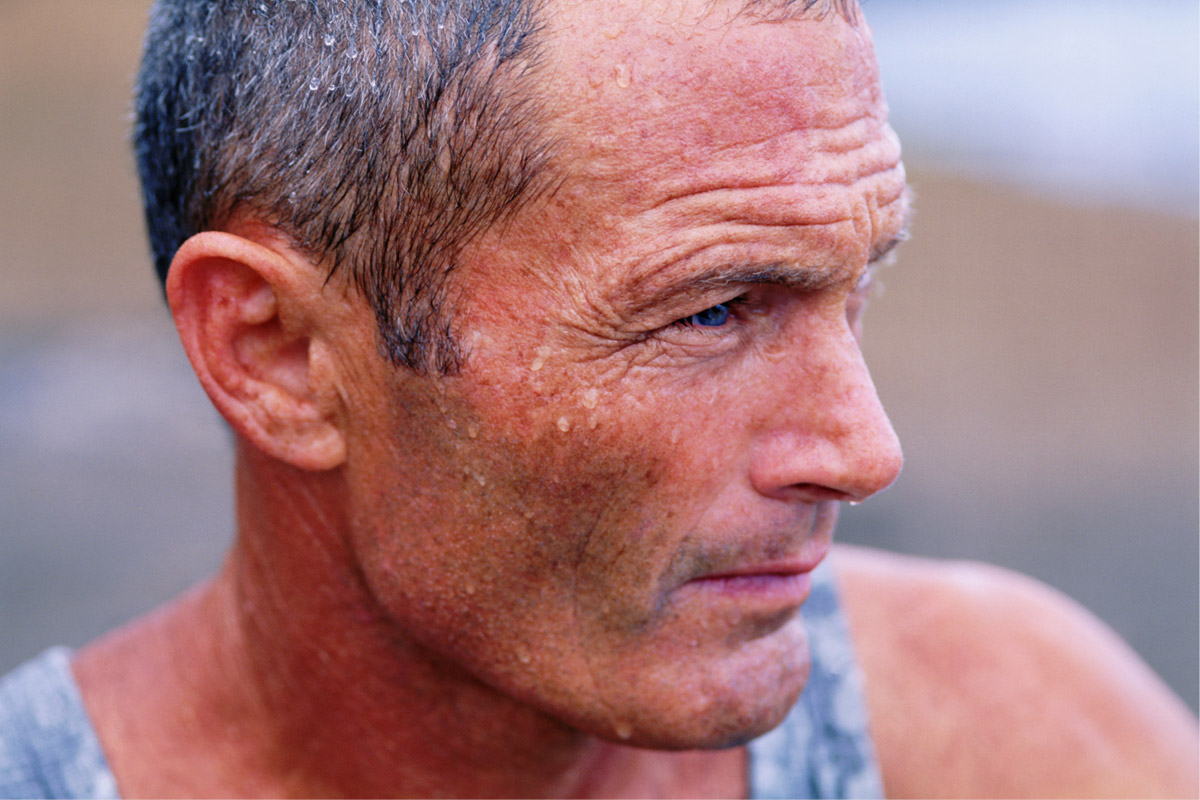 Author's Note: 5 Things in Your Sweat That Make You Stink

Researchers in Madrid are working on ways to use a person's body odor as a biometric tool for personal identification. They say every person has a recognizable pattern of body odor. For the record, I didn't have to be a Spanish scientist or have some fancy biometric mechanism to know when my friend Pat walked into the room.

How do deodorants keep you from stinking?
Why do feet stink?
What causes underarm odor?