Browse the article How to Eliminate Underarm Odor 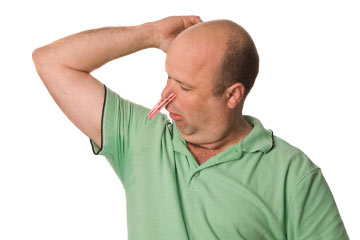 Everyone has a distinct scent, but excessive body odor can be unattractive and alienating.
©iStockphoto.com/Martti Salmela

The key to what you like is often in your nose. Because your senses are connected, an enticing aroma can make something good -- such as a tasty dish or a pleasing sight -- become even more attractive. What's more, each person has his or her own personal scent. Researchers have found that smell is often a key to a person's attractiveness, because your personal odor -- your chemical fingerprint -- can subtly draw people to you [source: Svoboda]. But this process works the opposite way, too, when there are those other kinds of smells. You know the ones -- the unpleasant aromas that sometimes waft by when you're in tight quarters with other people.

Sometimes bodily odor can occur even when you've taken every personal hygiene precaution, and this could signal a bigger problem: a condition called bromhidrosis. Physicians use this term to refer to excessive body odor that falls outside of the normal range. Bromhidrosis is more common in men than in women. Although the exact reasons are unclear, doctors theorize that the reason for this might be that men have greater activity than women do in a particular kind of sweat gland found in the armpits, called the apocrine gland [source: New Zealand Dermatological Society].

But even excessive body odor caused by bromhidrosis can be tamed by taking the right steps. We'll learn more about what exactly causes the smell on the next page.

You might be thinking that you already know the cause of underarm odor: sweat. But the fact is that sweat itself doesn't have a smell. Perspiration is primarily composed of water and salt. Underarm odor isn't caused by your sweat, but instead by the bacteria that's attracted to the places where you sweat the most, such as your feet, thighs or underarms [source: Clark].

To understand the causes of underarm odor, first you have to understand how your body sweats. Your body contains two types of sweat glands: eccrine and apocrine. Eccrine glands open directly onto the surface of your skin. For example, when your palms sweat, that perspiration comes from the eccrine glands. Apocrine glands open into your hair follicles, secreting a thicker sweat that is usually connected to underarm odor [source: Clark]. Because the areas of your body that contain apocrine glands also tend to be places that are warm and confined, the moistness can cause them to become a breeding ground for the bacteria that causes body odor.

Bromhidrosis, or extreme body odor, is generally linked to apocrine sweat and its bacterial breakdown. However, sometimes eccrine sweat can also lead to this unpleasant odor, such as when it softens the protein keratin on the surface of the skin, or when a person has consumed certain foods.

Sometimes, bromhidrosis can be caused by health issues such as obesity and diabetes, because they are associated with other conditions that encourage bacteria growth. One such condition, for example, is hyperhidrosis, which consists of excessive sweating from the eccrine glands. The moist environment created by hyperhidrosis creates ideal conditions for an overgrowth of bacteria [source: Rehumus].

If you've got a taste for garlic, onions or hot chili peppers, you could be making your body odor worse. To learn more about how what you consume affects body odor, continue reading.

If you are obese, then losing weight isn't just an option; it's necessary for good health. There's also an additional benefit: A healthier weight means that your body won't be as physically stressed, which may help decrease the amount and frequency of your sweat -- another step on the road to banishing bromhidrosis [source: New Zealand Dermatological Society].

Eating certain foods such as garlic, onions, fish, curry, hot peppers and other spicy foods, and even alcohol can make your underarm odor smell worse. Research has also shown that eating red meat can also worsen underarm odor, whereas a diet without it might improve the smell [sources: WebMD].

There are also foods that researchers believe might help get rid of underarm odor. Drinking plenty of water and eating fruits, vegetables and whole grains should improve your overall health and metabolic function, which helps your body to work more efficiently. This can help lower your body's stress levels, which may decrease the amount that you sweat and help you avoid creating an environment that attracts odor-causing bacteria.

In addition, some alternative medicine practitioners say that adding a variety of vitamin-rich foods and herbs to your diet can also help to reduce underarm odor. For example, eating chlorophyll-rich foods such as kale and spinach is sometimes recommended as way to help neutralize other foods that cause underarm odor. Some nutritionists also recommend a detoxification diet, which includes vitamin-rich foods and herbs?, in addition to herbal and green teas, whole grain rice, vegetable juice and olive oil [source: Gottlieb].

In addition to changing your diet, you can also go right to the source of the problem and treat underarm odor where it starts. To learn what options are available for treating and preventing this condition, read on to the next section.

Eliminating foods that seem to make you sweat more or worsen your body odor is simply logical. However, many of the dietary recommendations for preventing or reducing underarm odor are not scientifically tested, so you should always consult your doctor before making any major dietary changes.

If changing your diet doesn't eliminate underarm odor, you might need to take more steps to get rid of the smell.

Take a close look at your regular wardrobe, too. Choose clothing made from natural fibers, and work out in clothes designed to wick moisture away from your body to keep your skin dry, which helps deter bacteria growth. Remember to keep your clothes clean, and always avoid re-wearing clothes between washings, particularly those that you use for exercising.

Another at-home treatment option you can try is to practice relaxation techniques, such as yoga or meditation. This could reduce stress levels so that you might sweat less and give odor-causing bacteria little room to thrive [source: Mayo Clinic].

If these measures don't provide any relief, consult your physician, who might prescribe an aluminum chloride antiperspirant [source: Mayo Clinic]. These products work by forming a gel plug in the pores, which reduces the excess perspiration that leads to the smell and can be washed away [source: International Hyperhidrosis Society]. Injections of botulinum toxin type A, or Botox, can provide longer-term relief from excessive sweat [source: Clark].

Finally, there are surgical treatments for underarm odor, too. An outpatient surgical procedure called superficial liposuction curettage will remove sweat glands by suctioning out subcutaneous tissue through small cuts on the skin [source: Rehumus]. Options for open surgery include cutting or shaving the subcutaneous tissue through procedures that may or may not remove skin along with it. The open surgery methods require a longer healing time and have higher risks, but their results last longer than those of liposuction. In general, these procedures are used only as a last resort.

If you'd like to learn more about underarm odor and ways to prevent or eliminate it, look through some of the links on the next page.

The perception of body odor varies widely across the world -- so much so that numerous studies have been conducted on the subject. Diagnoses of bromhidrosis are more common in some Asian countries, where bodily odor is often highly stigmatized [source: Clark].