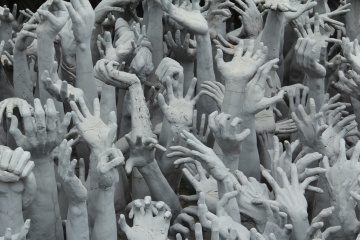 Raise your hands if you’re sure you know what causes odoriferous armpits.
superpohn/iStock/Thinkstock

How to begin an article on underarm odor. Should we go for the easy opener and imagine a stressful situation in which we curse our foul-smelling sweat? Or conjure the image of a famous sweaty celebrity -- Shaq at the free-throw line comes to mind.

But here's the thing: Your sweat doesn't actually smell. Period. No matter what dripping person or situation you can think of, you're not getting any closer to learning what actually causes underarm odor. So if it's not sweat that's causing you to clamp your arms firmly to your sides on a hot bus ride, what is it?

Let's first get a little primer on perspiration so that we can get to the root of underarm odor and how sweat contributes to it. Humans have three types of sweat glands: One type is called the eccrine, and that's the kind you'll find on most parts of the body. Palms sweaty before a job interview? Forehead damp during a first date? Those are eccrine glands acting up.

Today we concern ourselves with the apocrine glands. These little pals are the ones that we'll find in places with lots and lots of hair follicles: our groins, for one, and your friendly neighborhood armpits. (There’s also the combo kind first suggested by K. Sato and his colleagues in 1987 that they dubbed apoeccrine glands.) In general, these glands work the same way. The cells in a sweat gland secrete a fluid, and that fluid is largely reabsorbed into the skin when you're at rest or just generally chillin.' However, if it's hot or you're stressed? The volume is a bit greater and can't be fully absorbed. Instead, it's deposited on the surface of the skin. Et voila! Sweat.

In our eccrine glands, the release of that salty fluid is pretty much end of story. But our apocrine glands? They're producing a perspiration that's a bit more interesting than their eccrine pals.

Apocrine glands produce a liquid -- while still odorless -- that contains proteins and fatty acids. It's actually even a milky off-white color, which you probably wouldn't notice, unless you recall that your white T-shirts are mottled with yellow stains in the armpits. Those proteins and fatty acids aren't just causing laundry headaches; they're the key to underarm odor, too.

Does shaving your armpits reduce sweating?
How Body Odor Works
How to Eliminate Underarm Odor