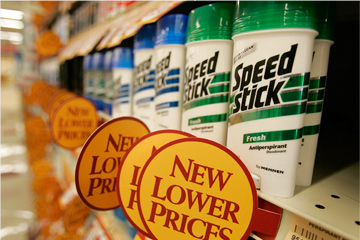 The underarm industry has evolved into a multibillion-dollar business in the U.S.
© Kimberly White/Corbis

The inventor, his name lost to history, found himself at the intersection of Stinky and Smelly streets in the City of Brotherly Love. He stood at the crossroad and pondered the age-old dilemma of body odor. What could make a person smell better, he intoned? It was 1888, the height of the Industrial Revolution, and Philadelphia, like most communities, was brimming with the ripe.

The inventor, nicknamed "Mum," knew there had to be a better way to make people smell more pleasant. Humans had tried for centuries with varying degrees of success to mask the nose-wrenching scents emanating from their soiled and sweaty bodies. The ancient Egyptians preferred perfumed oils or cinnamon, which they rubbed under their arms. In Asia, the odoriferous slathered their armpits with a mixture of rock salt. The ancient Greeks scraped their underarms with a sharp metal tool, hoping to chisel the smell off [sources: MUM, Lewis].

Such tricks of alchemy wouldn't do, Mum thought. Science needed to find a better way. So, in a laboratory, kitchen or basement somewhere on the banks of the Schuylkill River, Mum mixed a creamy wax of zinc oxide. When he was finished, the first deodorant was born. Mum trademarked his concoction, and it soon went on sale in small tins. People applied the cream liberally to their underarms and feet. Women even used the substance, henceforth named MUM, during menstruation. MUM wasn't a big seller because it was messy and hard to apply [sources: MUM, Newman].

Yet, Mum was a pioneer. A few years later, people began swiping on the first antiperspirants to combat their underarm odor. Problems were many. Their acidity caused skin irritation. They discolored blouses and shirts. Better antiperspirants were invented. Today in the United States, the antiperspirant and deodorant industry is a multibillion-dollar business, each brand bursting with a variety of ingredients that helps wipe the stink away [sources: Poucher, MUM, Newman].