When should kids start using deodorant? 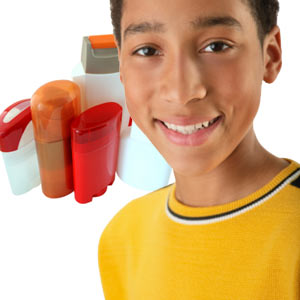 Anyone of any age can develop body odor, but it usually begins during puberty.
© iStockphoto.com/Stockbyte-Getty Images

Your nine-year-old son and his 15-year-old brother come in from playing an intense game of soccer. They both reek. You expect if from your teenager, but isn't it too early for your nine-year-old to be smelling this foul? No -- anyone of any age can potentially develop body odor. So at what age should someone start using deodorant? Some people, some children, in fact, sweat more than others do. When sweat forms on the body, it reacts with the bacteria that everyone has on their skin -- resulting in an unpleasant odor [source: McCarthy].

That being said, most children don't really experience this problem until puberty. At the onset of puberty in boys and girls, gonadotropin-releasing hormones (GnRH) are released. They travel from the brain directly to the pituitary gland. When that happens, the pituitary gland starts releasing luteinizing hormones (LH) and follicle-stimulating hormones (FSH). Where these hormones go and how they are put to work depends on gender [source: TeensHealth].

Many people associate puberty with raging hormones -- and this idea is fairly accurate. What some people don't realize is that the raging hormones serve a purpose: affecting glands in the body, including the sweat glands [source: TeensHealth]. The sweat glands start to work all the time -- making teens sweat more -- and when the sweat hits the bacteria on their bodies, odor occurs.  Therefore, the onset of puberty is an ideal time to integrate deodorant, which can combat the associated smell of this prolific perspiration, into a young person's daily routine. This is probably also a good time to remind the affected individual about good hygiene habits such as showering every day, or even twice a day if his or her daily schedule includes a lot of exercise or sports.

While it's pretty normal for children who haven't started puberty yet to become a little stinky after a lot of playing and running around, those with persistent body odor should be checked out by a doctor to determine if it is being caused by early-onset puberty (earlier than about nine years of age), or possibly -- although it's rare -- a metabolic problem [source: McCarthy]. Usually though, the odor is just the smell of kids having fun, which can quickly be conquered by a bath.

For more information, visit the links on the next page.

Can my deodorant cause breast cancer?
What does a change in body odor mean?
How does diet affect body odor?