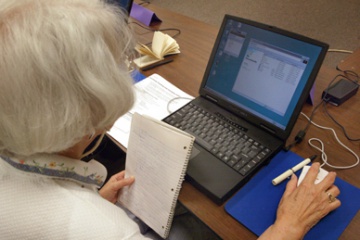 According to the "use it or lose it" theory, staying active both physically and mentally can help keep you feeling young.
Tim Boyle/Getty Images

What's that sound? According to this theory, it's your biological clock, ticking away at a predetermined rate. This theory says that DNA, the cells' genetic material, holds the key to your planned demise from day one. While this aging theory appears fatalistic on the surface, remember that biology is not destiny. You can't change your genes, but you can slow the march of time with better nutrition and regular physical activity.

Your body produces hormones that help regulate myriad functions, including growth and behavior, reproduction, and immune function. In your youth, hormone production is high, but as you get older, hormone levels drop off, causing declines in the body's ability to repair itself and to keep functioning in top form.

Working cells produce waste. Over time, cells make more waste than they can possibly get rid of, which may wreak havoc on their ability to function and slowly lead to their death. Lipofuscin, or age pigment, is one of the waste products found primarily in some nerve and heart-muscle cells. Lipofuscin binds fat and proteins together in the cells. It accumulates over time and may interfere with cell function.

The protein collagen is at the heart of this theory. Collagen, akin to the body's glue, is one of the most common proteins making up the skin, bones, ligaments, and tendons. When we're young, collagen is pliable. But with age, collagen becomes more rigid, and it shrinks. That's why your skin is less elastic than before.

Aesthetics aside, cross-linking may block the transport of nutrients into cells as well as obstruct waste-product removal. Free radicals are destructive marauders roving your body, ready to pounce on healthy cells. They are produced as part of the millions of chemical reactions your body performs to sustain life.

Your body also makes them in response to environmental toxins such as excessive amounts of unprotected sunlight and cigarette smoke. Free radicals oxidize your cells (think rusting metal). As unbalanced, volatile oxygen molecules, they sacrifice healthy cells to make themselves more stable.

In doing so, free radicals destroy or alter DNA, the cell's genetic blueprint, and disrupt many other cell functions. Free radicals may kill cells as a result of their marauding, or they may give rise to mutant cells that can lead to chronic conditions including cancer and heart disease. Fortunately, the body maintains a sophisticated defense system against free radicals. Unfortunately, our defenses wane with time, and cell damage ensues.

This theory could also be called The Use It and Lose It Theory. The idea is that use, and overuse, of your organs pushes them to the brink of destruction. A poor diet, too much alcohol, and cigarette smoking are thought to accelerate natural wear and tear. With age, the body is less able to repair itself.

How does wear and tear occur? Free radicals, which inflict cellular damage, may be culpable. Similar to the wear and tear idea, this theory says you are born with a certain amount of energy. If you live "fast," you die young, because you use up your energy reserves sooner. "Laid-back people," who suffer from less stress and take life easier, would live longer should this theory prove correct.

A strong immune system is your body's most important defense against germs and toxins. White cells engulf and destroy potential pests such as bacteria and viruses. And they manufacture antibodies, the "soldiers" that patrol the bloodstream, attacking and disarming any substance they don't recognize as the body's own.

Problem is, the immune system becomes less efficient with time, and fewer antibodies are produced, increasing your infection risk. What's more, the body may turn on itself by producing antibodies that destroy its own tissue. When that happens, autoimmune disease, such as lupus and rheumatoid arthritis, is the result.

Although we still do not completely understand the process of aging, we do know quite a lot about it, as we've seen. To find out more about the aging process, check out the links below.