When you live in a developed and (arguably) thriving first-world country, you expect a few nice things — decent transportation infrastructure, maybe, or a good national sports team to cheer for at the Olympics. You also can probably count on the fact your life expectancy will inch up a bit each year, as public health and science improves. The good news is that this does hold true for most demographic populations in the United States.

The bad news? New research by the National Center for Health Statistics (NCHS) and Centers for Disease Control and Prevention (CDC) says that life expectancy is decreasing for one traditionally robust group: non-Hispanic white women. From 2013 to 2014, white women's life expectancy saw a drop of about one month, from 81.2 years to 81.1. (Life expectancy in the U.S. for the overall population during that same period was 78.8 years.)

You're forgiven if you're thinking that a month's drop in life expectancy isn't going to send you screaming to, say, Japan. (Women there can expect to live around 87 years, the highest in the world, according to a 2014 World Health Organization report.) But that month decline for white females signals something significant, because it's the first time the group — a big one, in terms of the U.S. population — saw a decline in the nearly 100 years the federal agencies have been tracking this data, NPR reports.

Laudy Aron, senior fellow and researcher at the Urban Institute, points out in an email that this drop follows a disturbing global trend for American women. While women in other high-income nations have seen life expectancy rates rise, American women's haven't increased in tandem.

"In 1980, we were right in the middle of the pack," Aron says of female life expectancy in the U.S. compared to other high-income countries. "But by 2005, we had dropped to the very bottom. ... Compared to these other countries, our improvements over time have been much slower, and now we are even seeing an actual decline (within the U.S.) from one year to the next."

The author of the NCHS report, Elizabeth Arias, says that forthcoming research shows that white women's mortality rates are increasing at an earlier age due to suicide, alcohol abuse and unintentional poisonings, which indicates drug and prescription opioid overdoses. A 2015 Urban Institute brief detailed similar findings: poisonings, suicide, obesity- and smoking-related diseases were driving the death rates of white women between the ages of 15 and 54.

Now let's be clear: White women still enjoy a higher life expectancy than that of all men and black women, and it's positive to see that life expectancy is either rising or staying steady for other demographic groups. But Aron cautions to keep a careful eye on white women's rates of mortality and life expectancy.

"It will be important to see if this overt decline even within the U.S. continues in the years ahead," she says. "But I think the evidence we already have should be sounding the alarms with respect to women's health and well-being. Remember too that when women in mid-life suffer, so do our children, youth, elderly parents. ... The social and economic fabric of our communities starts to fray."

Now That's Interesting
In 2015, two Princeton economists published a study that found deaths among middle-aged whites in the U.S. had increased a surprising 8.9 percent from 1999 to 2013, while mortality rates among blacks and Hispanics dropped.

Predicting the Next Death on 'Game of Thrones'

No, Not Only U.S. Presidents Are on American Money 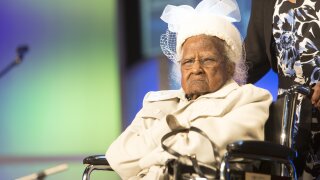 What if the average human life span was 100?

Is Unemployment Accelerating Your Aging?