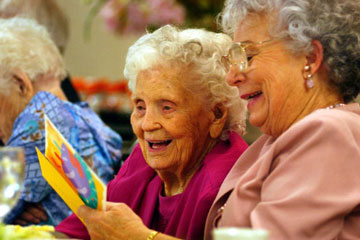 What does it take to live for 100 years or more? The question has intrigued both researchers and people from all walks of life for centuries: Greek myths touch on the question of eternal life, and a long line of researchers have studied this question, looking for patterns in the habits, genetics and health backgrounds of people who make it into a second century of life.

And those researchers are finding more subjects to study. The U.S. Census Bureau reported in 1990 that 37,306 centenarians -- people who have reached age 100 -- lived in the United States [source: Krach and Velkoff]. As of 2010, that number had boomed to roughly 72,000. The rise in centenarians is not just confined to the United States, either: Growth rates for this population in the United Kingdom show a similar boom [source: Sedensky].

But there's a difference between simply living to extreme old age and living a healthy lifestyle at age 100 or beyond. This is the key quest for many people interested in extending their lives as long as possible, and they take specific steps in the hopes that they'll be able to live healthy, active and vital lives in their advanced years.

Centenarians come from all backgrounds, ethnicities and walks of life. Although there are more of them in developed countries, likely due to better health care, some regions, known as blue zones, appear to have been producing centenarians since before modern medical advancements became available [source: Blue Zones]. One thing that connects many centenarians worldwide, however, is their approach to life and social interaction.

Centenarians are often described as being independent, outgoing and curious about the world around them. Neuroses, such as paranoia or the tendency to hold grudges, are rare in this group, regardless of nationality [source: New England Centenarian Study].

Healthy centenarians typically live on their own, or without the need for daily care from nursing staff or family. They also tend to be very active, whether in community or social groups. Centenarians commonly have many friends and spend a great deal of time with them. This group also shows a high degree of open-mindedness; they're willing to go with the flow when facing unexpected life events. And by and large, centenarians who have been interviewed about their longevity tend to express an overall sense of optimism. It appears that seeing the glass as half full is a helpful attitude if you want to see a triple-digit number on your birthday cake [source: Langreth].

Centenarians the world over have similarities that go beyond attitude and outlook. Next, we'll look at how diet and exercise appear to play a notable role.

One medical factor stands out among centenarians: These long-lived men and women tend to avoid the illnesses of adulthood. Cancer, diabetes and heart disease all take a toll on the adult population; even if a person is afflicted with one of these illnesses and survives, he or she is likely to suffer some degree of reduced health for the rest of his or her life as a result.

While some diseases, such as certain types of cancer, appear to have a genetic underpinning, other diseases of adulthood can be mitigated -- or even prevented -- with certain healthy lifestyle steps. Many centenarians, whether by choice or through the influence of their home cultures, follow diets high in fruits and vegetables and low in processed foods and fatty meat. Seventh-day Adventists, for example, are encouraged to follow a vegetarian diet. This has led to many in that religious community living into their upper 80s or longer [source: Langreth].

Researchers and health advocates have long promoted the so-called Mediterranean Diet, a diet heavy on fruits, vegetables and whole grains that also includes healthy fats and protein from sources like fish and seafood. It only includes sweets, dairy products and fatty land-animal meats occasionally. Not only does the Mediterranean Diet appear to ward off buildup of LDL cholesterol, the bad cholesterol that plays a role in heart disease, but research also suggests it may help reduce the odds of developing Alzheimer's and other dementias that often appear in older age.

Centenarians also typically report that exercise is a regular part of their everyday routines. Even short but regular walks or light exercise at the gym can have significant long-term benefits, including lowered blood pressure and healthier cholesterol levels. And with heart disease still a leading killer of adults in the developed world, a person interested in joining the growing ranks of centenarians would be well advised to start -- and keep -- these heart-healthy habits. 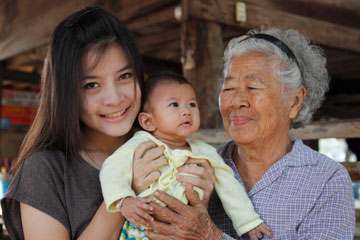 Will having a family of long-lived ancestors increase your likelihood of living to 100 and beyond? In short, there's a good chance that it will. Researchers through the years have identified families who, based on family disease histories and lifespans, are more likely to produce centenarians than other families. And as genetic research has become more advanced, scientists are starting to single out genes that may tie into the traits that promote long life: resistance to disease, a lack of genetic markers for heart disease and cancer, and low likelihood of mental illness or dementia.

That doesn't mean, however, that some of us have a free ticket into old age. Increasingly, research suggests that longevity is as much a factor of behavior as genetics. In other words, a person with a moderate genetic risk of heart disease who exercises and eats well may outlive a sedentary smoker who carries the genes that promote longevity. As in many aspects of life, genetics are likely only one of many factors that determine how long a person lives [source: New England Centenarian Study].

So are there secrets that will improve our odds of reaching 100 years and beyond? And how much of the human aging process can we actually control?

For starters, the habits of happy, healthy centenarians provide useful lessons for living a healthy life, regardless of age. Eat well. Exercise. Maintain friendships. Don't obsess about small setbacks or things beyond the scope of your control.

Another step toward living a long life is to stay on top of health issues that could become problems as you age. Review your family's medical history with your doctor, and work with him or her to establish a health plan that monitors for any health problems you may be predisposed to develop. If your family has a history of high blood pressure or heart disease, your doctor may want to monitor your cholesterol levels. If Alzheimer's or dementia is common in your family, your doctor may recommend steps that can help ward off the onset of these diseases [source: Park].

There are some factors you can't control, such as genetics or the toxic elements that may be present in your local environment. But what you can control -- diet, exercise and social activity -- can play a big role in helping you get the most out of every year of life you live.

For more information on centenarians, check out the links on the next page.

What's a blue zone, and am I living in one?
Are people more likely to live to be 100 in certain parts of the world?
7 Countries Home to the World's Healthiest People

One in Six Say They'd Rather Die 'Young.' What Age Is That?
What do free radicals have to do with aging?
Baby Boomers: All You Ever Needed to Know