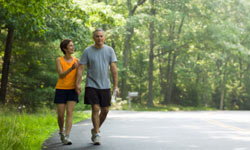 Compared to older generations, fitness and exercise are more culturally ingrained in the minds -- and daily routines -- of baby boomers.
Comstock/Thinkstock

Whether it's about losing weight, lowering blood pressure, or increasing energy and longevity, doctors and researchers have long touted the benefits of regular exercise. This message hasn't been lost on the boomers, who have over the years helped several exercise "fads" go mainstream, such as jogging, aerobics and neighborhood fitness gyms.

Compared to older generations, fitness and exercise are more culturally ingrained in the minds -- and daily routines -- of baby boomers.

As more and more boomers reach retirement age, there's a generational focus on longevity and delaying the physical and visible effects of aging. So it's no surprise that many boomers view exercise as a key ingredient to a longer, healthier and happier life.

One study showed that active people enjoyed 16 additional years of healthy living than did sedentary people [AARP]. Exercise also seems to delay effects of dementia down the road, as well as improve the functioning of joints.

There is, however, a downside to all this exercise on the part of the boomers. Their active lifestyles frequently land boomers in ER rooms, doctors' offices and sports medicine clinics because their bodies can't always keep up with the demands placed on them.

But for those who know when to say "when," exercise is a readily accessible fountain of youth, or at least one way to delay aging.

But, as we'll next discuss, they don't make retirees like they used to.