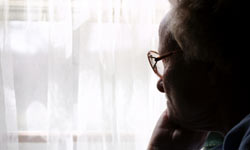 An elder being abused by her caregiver may become withdrawn and depressed.
©iStockphoto/video1

The older population of the United States is growing fast, to put it mildly. According to the U.S. Census Bureau, there were about 35 million people over the age of 65 in 2000 [source: U.S. Census Bureau]. This number will soon rise dramatically as the oldest of the 76 million baby boomers reach retirement age [source: PRB]. This rise in the elder population unfortunately has also come with a rise in elder abuse. There are more than 2 million cases of elder abuse reported each year, and as many as five cases that go unreported for each reported case [source: APA]. And while it's easy to assume that elder abuse occurs only in institutional settings, it might surprise you to know that it's actually more likely to involve a family member such as a spouse or child.

Elder abuse can mean that an elderly person is being intentionally harmed, put in harm's way or neglected. In some cases, the vulnerable physical and mental state of some elders makes them more susceptible to unscrupulous people. In others, the abuse is unintentional -- the caregiver simply isn't equipped to deal with the demands of caregiving.

Spotting elder abuse can be difficult, but we've got five basic signs of elder abuse to look for. First up: financial changes.