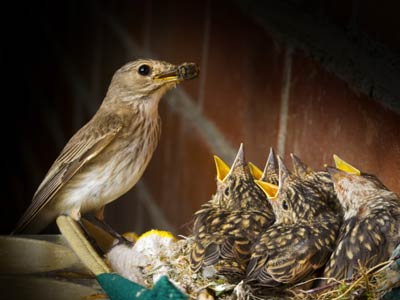 An empty nest can be lonely, but what if the nest ever empties at all?
©iStockphoto.com/proxyminder

Though a person is a parent until the day he or she dies, we've come to identify a parental finish line of sorts: the empty nest. The term has come to denote a home in which the last child has moved out (even though they may still be right at home in your wallet when it comes to college tuition). Some parents can't wait to cross that finish line, anticipating years of travel, new hobbies and the opportunity to socialize with people whose diapers they haven't changed. But not everyone looks forward to the time, and those who have a harder time adjusting to the loneliness after the last child departs are said to suffer from empty nest syndrome.

There's another outcome in the great parental race to the finish, however, and that's what occurs when a child never leaves. In 2008, writer Amy Baskin wrote an article for More Magazine entitled "Empty nest envy." Baskin, 49, wrote about her 16-year-old daughter, but she didn't envision a footloose and fancy-free lifestyle for herself in the coming years. Instead, Baskin foresaw a complicated future because her daughter has autism.

­In the article, Baskin acknowledged that special needs children and their parents have quite a bit of support and options when children are young. However, once these children come of age, they're often too old to participate in some programs and classes. She writes of parents who can't afford to retire because they must continue paying for caregivers and residential programs, and she explores housing options for twentysomethings who can't take care of themselves. Throughout the article, Baskin writes of how parenting will be a full-time job for parents until they die, and how empty nest free time that other parents take for granted will never be theirs. She struggles with how to do the best thing for her child while not denying herself the life she would like to live.

Baskin's not alone in wishing her nest could be a little emptier someday. On the next page, we'll consider some other circumstances that may have you envying those empty nesters.

Boomerang and Sandwich Generations: When the Nest Doesn't Empty

Several studies have shown that parents were more likely to suffer distress about their empty nest when children didn't leave at the expected time [source: Raup, Myers]. As we discussed on the last page, this may be due to developmental disabilities or conditions involving special needs. However, in some cases, it may be that the last child living at home simply won't leave. According to a 1978 study, this situation presents difficulties to parents who were ready to relinquish daily parenting duties at a certain point, only to find themselves saddled with the tasks for longer than expected [source: Raup, Myers].

Though Thomas Wolfe's 1940 tome warned "You Can't Go Home Again," plenty of children find that, in fact, they can and sometimes have to. The term boomerang generation refers to those grown children returning home to live with their parents. In 2006, almost half of surveyed college graduates reported that they planned to return to their parents' nest to live; just three years earlier, another poll found the number to be closer to 61 percent [sources: Levine, Paul]. With the current economic situation, the children boomeranging back home may only get older; in February 2009, Time magazine profiled people in their 30s and 40s forced to move back in with their parents due to the recession [source: Koss-Feder].

Children may boomerang for a wide variety of reasons, from needing to save money to divorce to trouble with the law. The problem for parents, however, is housing adult children who want to be treated like grown-ups while maintaining a childlike level of responsibility in the house they grew up in. A boomerang situation may require negotiation between parents and children on everything from the overnight guest policy to rules regarding household chores. Parents may feel they're walking a fine line between supporting their children and enabling them to shirk responsibility.

Setting timelines for a boomerang child's departure may help parents to set some limits on the situation while maintaining sight of the empty nest they may desperately miss. But commonly, parents will wave goodbye to their adult children only to turn around and wave hello to their own aging parents. Baby boomers may also come to be known as the sandwich generation; not only do they have adult children under their roofs, they may also house their aging parents who aren't ready for the nursing home.

So if you're a parent with an abundance of free time, just remember there are plenty of parents who would rather trade places with you. For more information on the empty nest years, see the links on the next page.

How to Care for Aging Skin
Are people more likely to live to be 100 in certain parts of the world?
5 Resistance Band Exercises for Seniors