Acai Superfood Diet: What You Need to Know 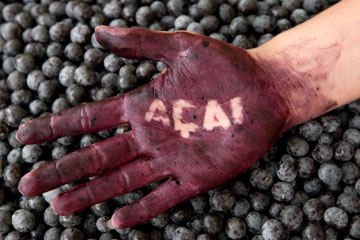 While the acai berry certainly has superfood status, its reputation as a weight-loss aid is under dispute. What do you think of these little purple berries? See more weight loss tips pictures.
©iStockphoto.com/Brasil2

It's no secret -- Americans have a weight problem.

More than 190 million Americans are overweight (a BMI of 25 or greater), obese (a BMI of 30 or greater) or morbidly obese (a BMI of 35 or greater) -- in total, about two-thirds of the U.S. population weighs too much [source: Doane]. It's probably not surprising, then, that two-thirds of Americans admit they'd like to lose weight. While most would like to lose about 10 pounds, some -- about 30 percent of women and 18 percent of men -- would like to cut more than 20 pounds to be satisfied with the number on the scale [source: Newport].

Obesity is more than just a number on a scale, though, or your clothing size. It's a chronic health problem that's been linked to a variety of health conditions and diseases, including but not limited to Type 2 diabetes, heart disease, stroke, hypertension (high blood pressure), respiratory conditions, joint problems, liver and gallbladder disease, infertility and some cancers. And people who are morbidly obese frequently have more than one of these conditions -- in fact, in 2002, 25 percent of the morbidly obese population were treated for six or more weight-related conditions [source: Obesity Action Coalition]. Every year, roughly 112,000 Americans die from an obesity-related cause [source: Obesity Action Coalition]

Beyond the health costs of obesity, the associated financial costs are staggering. Obesity and related illnesses cost us $147 billion each year in medical costs. In 2007, Americans spent an estimated $75 billion on, specifically, weight-related health costs -- that's risen by $23 billion since 1995 [sources: Reinberg; Centers for Disease Control and Prevention]. Additionally, in 2009, Americans spent an estimated $60 billion on diet and diet-related products in an effort to lose weight [source: CBS News]. In the midst of the medical treatments and diet pills, you're probably wondering where the emphasis on nutrition is? Where is the emphasis on exercise? Are we looking for a magic pill? While there's no magic weight-loss pill, there are what have become known as superfoods.

Superfoods are foods that are thought to reduce our risk of developing heart disease, high total cholesterol and some cancers. And maybe even boost our mood while they're at it. The Acai Superfood Diet, specifically, focuses on one superfood, the acai (pronounced "ah-sigh-ee") berry from acai palm trees in Central and South America. Let's learn more about what superfoods can do for us, and how the Acai Superfood Diet works, next.

As it turns out, according to the Centers for Disease Control and Prevention, only about one-quarter of American adults eat the recommended daily serving of fruits and vegetables -- that's five or more servings every day. If it sounds daunting, let's look at it this way. One serving of fruit is equal to an apple the size of a tennis ball (1/2 cup of fruit). One serving of vegetables is equal to four leaves of lettuce (1 cup of leafy greens). It's not so bad when you think about it as food portions instead of as cup sizes.

Eating those five or more servings of fruits and vegetables each day may help to reduce your risk of heart disease and stroke by as much as 30 percent [source: The Healthy Eating Guide]. Some foods, though, like the acai berry, work a little harder to keep you healthy: These are the superfoods.

Superfoods aren't meant to spark weight loss or jump-start your metabolism. Rather, they're foods that are packed with antioxidants and nutrients -- they're good-for-you foods that you should try add to your daily diet as often as possible. Antioxidants are substances found in many fruits, vegetables, nuts and grains (as well as in some meats, fish and poultry). Vitamins A, C and E are all antioxidants, and so are beta-carotene, lutein, lycopene and selenium. They help protect our cells from something called free radicals, which are molecules that form as the body metabolizes food or when we're exposed to environmental toxins such as cigarette smoke or radiation. Free radicals may damage otherwise healthy cells. Antioxidants stabilize them, possibly helping to prevent or reduce the risk of cancer, heart disease, chronic inflammation and other conditions free radicals have been linked to.

The acai berry, specifically, is dense with not only antioxidants but also amino acids and essential fatty acids (these are good fats, such as omega-3s). Some studies show that the berry may be 10 times richer in antioxidants than red grapes and contain as much as 30 times more anthocyanins (flavonoids) than red wine [source: Oprah.com]. How does this translate into a diet? Let's look at the pros and cons of the Acai Superfood Diet.

The Acai Superfood Diet: Its Pros and Cons

A well-balanced, nutritious diet full of lean meats, dark green leafy vegetables, fresh fruits and slow-burning carbohydrates in addition to daily exercise is the key to weight loss. Although you're unlikely to find the quick-spoiling berry in your local grocery store (you may run into it at a farmers market), adding acai to your diet is easy. There are the berries, which are available as juice or pulp to be added to smoothies and other foods. There is also a powder, which could be added to baked goods, shakes or smoothies. In 2008 alone, consumers bought nearly $15 million worth of acai products, from foods to skin care products, but not all acai products are created equal [source: Price]. Acai ice cream? Keep that in moderation. Just because a product contains acai doesn't transform it from a fatty, sugary food into a healthy snack -- always remember to read labels and avoid products with added sugar and products that are high in calories. And what about supplements? Until they're regulated, it's best to skip supplements (and whatever other ingredients may be added to them) and add the berry itself to your diet.

It's important to understand that the Acai Superfood Diet should not be used as a meal plan or a weight-loss strategy. The acai berry can be a healthy part of a nutritional diet, just like other antioxidant-rich foods like dark chocolate (at least 60 percent cocoa content), blueberries, oranges and tomatoes, but it hasn't been proven to promote weight loss or cure what ails you.

Keep reading for lots more information about obesity and superfoods.

Forty percent of American adults don't take part in any physical activity. No single food or diet plan alone will take you from bloated to buff, and even the most successful diets will fail you without at least 30 minutes of daily exercise, especially in the long run.

Worrying Has Some Benefits After All, Research Shows
Mayo Clinic Diet: What You Need to Know
How to Lose Weight on Commercial Diet Programs