How the Paleo Diet Works

Browse the article How the Paleo Diet Works 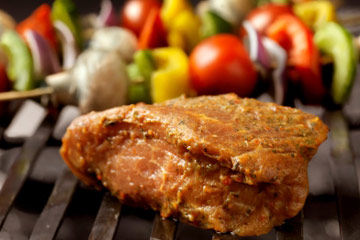 Grilled sirloin and vegetable kabobs doesn't seem much like diet food. But if you're on the Paleo Diet, it's common fare. See more weight loss tips pictures.
©iStockphoto.com/LauriPatterson

Not all processed foods are bad, though. Take unsweetened applesauce, for instance. It's a convenience to buy it, but it could just as easily be made in your own kitchen with water, apples and a heat source. Try whipping up some mechanically-separated poultry and an anti-foaming agent for your homemade chicken nuggets -- you get the point. But the idea here isn't to debate which foods are processed and to what degree. Rather, it's to point out that we have lost our connection between what we eat and where our food comes from, and in turn, that loss has led us down the path of obesity and ill health.

To help lose some pounds or maintain a healthy weight, many people look for help. The food pyramid, developed by the U.S. Department of Agriculture, makes recommendations to help Americans understand what we should and shouldn't eat to be healthy and to stay healthy. It's a guideline -- not a diet -- that suggests how many grains, vegetables, fruits, dairy, meat and beans make up a nutritious food plan. Diet trends often focus on reducing fats, carbohydrates or calories to lose weight or to maintain a healthy weight -- who doesn't remember the low-fat craze of the 1980s or the low-carb craze of the 2000s? Today, many of us are opting for foods that are local, foods that are organic and foods that are, to be blunt, real food.

The Paleo Diet, also called the Paleolithic Diet, the Caveman Diet and the Warrior Diet, is just what you think it might be: The diet focuses on the foods you do or do not eat, and the do's are those foods humans would have eaten during the Paleolithic era. What is that like, eating a diet based on that of our prehistoric ancestors? It goes beyond choosing foods that are local or organic; it goes beyond eating unprocessed foods. Let's find out more about the diet and its menu, next.

About the Paleo Diet

While the Paleo Diet may start out for some people as a modification to their normal diet -- swapping one ingredient for a Paleo-friendly one or removing certain foods from the grocery list in an effort to lose a few pounds -- changing the way you eat this significantly will change the way you live.

Foods that are part of the Paleo diet are typically foods that are high in protein, soluble fiber, omega-3 fatty acids, monounsaturated fats, phytochemicals and antioxidants, while low in refined sugars, empty carbs, bad fats and salt. A diet high in protein helps to keep hunger under control longer than refined carbs. How much is the right amount for you? There are different ways to figure how much protein you should eat every day, but one of our favorites is to divide your weight (pounds) by two and then subtract 10. A 140-pound (63.5-kilogram) woman should aim for about 60 grams of protein in her daily diet. This, along with foods packed full of slow-burning carbohydrates that won't spike your glucose levels (leaving you tired, hungry and at risk of developing Type 2 diabetes) are pros for the diet. It's a diet that's the antithesis of modern, Western eating habits -- the Western diet, along with a sedentary lifestyle, has been linked to diabetes, obesity, heart disease and other chronic but largely preventable conditions.

A study published in 2009 in the journal "Cardiovascular Diabetology" found that people with Type 2 diabetes who followed the Paleo Diet for three months benefited more than those who followed a standard recommended diet for diabetics. They not only improved their blood sugar levels but also reduced their risk of developing heart disease [source: Jonsson et al]. This is important because an estimated 17 million Americans have Type 2 diabetes, and diabetics have seven times the risk of developing heart disease than those who aren't diabetic [source: Peck].

Now, let's look at specifically what types of foods are in and which are out on the Paleo Diet -- as well as some of the diet's disadvantages.

So what did cavemen eat?

Humans during the Paleolithic era, a period during the Stone Age, were hunters and gatherers. They used primitive tools such as stone implements or rudimentary-fashioned hand axes -- the rise of agriculture is a defining characteristic of the end of the Stone Age, and without an agricultural society, there was no pasta, no bread, no butter. They ate a diet selected from the plants and animals they found nearby to where they lived, such as meats and fish, eggs, fresh fruits, vegetables and root vegetables, and nuts. Certainly nothing that'd been processed, or, for that matter, nothing that wouldn't exist without modern agricultural tools and techniques.

You shouldn't be surprised to find a lack of packaged foods on the Paleo Diet menu. There were no convenience stores or super-sized grocery chains in the Stone Age, and if you're one of the 31 percent of Americans who eats more packaged foods than fresh foods in your daily diet, it may be a bit of an adjustment [source: Fairfield].

Foods that are part of the Paleo Diet include the following:

And in small amounts, dried fruits, honey and some oils (including coconut oil, olive oil, avocado oil and animal fats) are allowed.

What's not allowed when following the diet?

While those who follow the Paleo Diet may sing its praises, not everyone would recommend this way of eating. Some doubt the diet's overall and long-term nutritional health benefits. While it may be beneficial in reducing our risk of chronic diseases such as diabetes, obesity, heart disease and some inflammatory conditions, skeptics point out that it doesn't offer balanced nutrition, and nutritional deficiencies raise our risk of developing health problems. Let's look at the restriction of dairy as one avenue toward nutritional deficiencies. Because the diet restricts dairy, it can be low in calcium and vitamin D (although dark leafy greens are a source of calcium and fatty fish contains vitamin D). And if you're not careful, long-term, high-protein diets may also be too heavy in saturated fats -- those are animal fats -- that can lead to heart disease, stroke, Type 2 diabetes and certain cancers.

While the Paleo Diet has pros and cons, it's important to remember that the best diet for you is one that's developed for you and your specific needs. Always talk to your health care provider before starting a new nutritional or weight loss program.

Hungry for more information? The next page has what you need!

Too Much Protein Can Turn Deadly

Diets high in protein usually result in quick weight loss, but too much protein can cause ketones to build up in the body. The body produces substances called ketones when it breaks down its fat reserves into energy, rather than turning carbohydrates into energy (a result of too few carbs to fuel the body). When the body has too many ketones, it may result in ketosis, a potentially life-threatening condition that may cause kidney stones, gout or kidney and organ failure.