Weight Watchers: What You Need to Know

Browse the article Weight Watchers: What You Need to Know 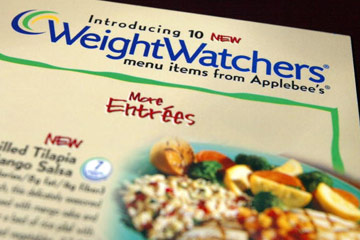 You can get all the exercise you can handle, but it still might not be enough to lose -- or prevent from gaining -- weight. And if you're avoiding both exercise and healthy foods, you could be in big trouble.

Weight Watchers is a program that (for a fee) encourages participants to stay active and to eat right. This means developing good eating habits like choosing healthier foods and eating sensible portions. Regular exercise is also strongly encouraged, as are keeping tabs on between-meal snacking and burning more calories than you consume.

The program calls for active participation, meaning you pay to attend meetings and, if you choose, to eat Weight Watchers meals. While it may be too time-intensive for some, the program may be perfectly suited for those who need a network of support and guidance, or who have a lot of weight to lose.

So how'd it all get started?

In the early 1960s, Jean Nidetch began hosting meetings in her home for people concerned with losing weight. From those earliest meetings, Weight Watchers has grown while helping others shrink: There are now 50,000 Weight Watchers meetings each week around the world [source: Weight Watchers].

Here are some of Weight Watchers' goals:

One of Weight Watchers' dieting philosophies is the concept of flexible restraint, the idea that a dieter should account for real life and not feel guilty about the occasional treat or feel deprived by attempting to rigidly maintain a strict diet. This helps dieters avoid burnout and maintain a diet while accounting for real life.

About 9 in 10 people who join Weight Watchers are female, though there's an increasing focus on getting men signed up [source: Schultz]. With this goal in mind, there's now a Web site designed specifically for men with some unique manly features such as assigning points to different types of beers.

What else do you need to know about Weight Watchers? The PointsPlus™ system, which we'll talk about next.

Other than meetings (which we'll soon discuss), the Weight Watchers points system is the central feature of the diet program. In Weight Watchers, foods are assigned a point value based on their content of protein, carbs, fat and fiber.

Program participants can eat whatever they want, so long as they don't go over their daily allotment of points. Junk food would have a high point value, meaning a good portion of your full daily allotment of points could be spent on a single food item, like ice cream or french fries. However, if you exercise, this is accounted for in your points, meaning you can eat more food than you otherwise would while still retaining a calorie deficit due to exercise.

Weight Watchers even has iPhone and Android apps to help you count points and track your meals when you're on the go.

Unlike some diet programs, it's up to you whether you want to buy food directly from Weight Watchers. You can also pick up normal grocery items from companies in partnership with Weight Watchers that have point values for the meals printed directly on the packaging. These meals (such as Weight Watchers Smart Ones or Lean Cuisine microwavable meals) usually have 300 calories or less.

Weight Watchers also has assigned points to non-sponsored food items, whether they're found in the grocery store, in restaurants or even in vending machines. If you eat a vegan, vegetarian or kosher diet, no problem -- Weight Watchers assigns all those foods points, meaning you can easily bring these dietary restrictions into the Weight Watchers system.

Next, we'll discuss what you need to know about Weight Watchers meetings. 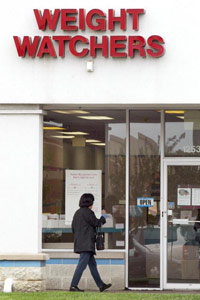 A client walks towards an entrance to a Weight Watchers meeting location May 18, 2004, in Arlington Heights, Illinois. With thousands of meetings around the country -- and the world -- dieters are able to find the support they need when they need it.
Tim Boyle/Getty Images

Meetings are a primary part of Weight Watchers (and a large source of the company's income), and they're offered in two forms: Weight Watchers meetings and online meetings.

Weight Watchers meetings are held around the world, and there's likely one -- if not several -- in or near your zip code. Meetings can also be established at a place of employment.

Meetings last about 45 minutes, and they usually begin with each person receiving a private and confidential weigh-in. A trained group leader, someone who's had prior and continuing success with Weight Watchers, leads the meeting. The group leader will help you set a goal for your weight loss (most new members usually start with a goal of losing 5 percent of their body weight), and will help you mark your progress at the weigh-in that starts each meeting.

The meetings are centered on discussions moderated by the group leader. Attendees can participate in the discussions or sit back and listen. The topic changes, though it always deals with issues related to weight loss, such as methods for tracking Weight Watchers points or how to overcome "stress eating." The group's leader and members share different strategies, allowing attendees to pick up tips and tricks that have worked for others.

The purpose of meetings is to provide an atmosphere of support, guidance and accountability. You can pay per meeting, or sign up for a monthly pass that allows you to attend unlimited meetings. Other deals on meeting packages are frequently offered. Weekly meetings cost somewhere between $9 and $13.

A study showed that Weight Watchers meetings helped reduce the risk of diabetes, and that the more meetings dieters went to, the healthier they were [source: Melanson].

Weight Watchers' online service offers around 1,500 recipes, a meal tracker, exercise-related videos and articles, and an online forum that allows you to connect with other dieters.

Next, we'll talk about what you need to know about the drawbacks to Weight Watchers.

While Weight Watchers has helped many people lose weight, the program has its drawbacks and isn't right for everybody.

Online membership cost is somewhere between $18 and $22 per month, and you may have to pay additional sign-up fees when you join. While attending live meetings and having an online membership would get pricy, the online offerings are generally offered as a substitute for the real thing, so there wouldn't be much need to have memberships to both. However, if you did have an online membership and regularly attended meetings, it could cost from $680 to $940 a year. This definitely isn't a program for someone who's not serious about losing weight and committed to accomplishing weight loss through the Weight Watchers system.

To its credit, Weight Watchers does allow just about anyone to join. However, if you're under age 17, you need a doctor's note to attend meetings. Pregnant women and children younger than 10 are forbidden, as are people with bulimia nervosa or who only weigh 5 pounds (about 2.3 kilograms) above the recommended weight for their height.

The PointsPlus™ system is a change from Weight Watchers' previous points program, meaning anyone who was familiar with the old system had to learn a new points-counting system.

Another drawback to Weight Watchers is the commitment of time. In addition to weekly meetings, you must track all of your food choices and count food points in order to make Weight Watchers' system work. This may be too time-consuming for some, but for others, it may create a level of commitment conducive to losing weight.

As is the case when making any major dietary or lifestyle change, you should check with your doctor if you have any health conditions or concerns before joining Weight Watchers.

For lots more information about Weight Watchers, see the next page.