Mediterranean Diet: What You Need to Know 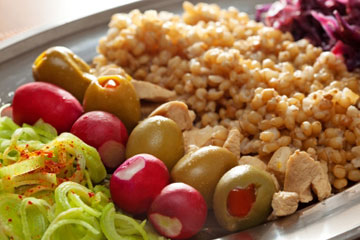 Mediterranean cuisine is about fresh, healthy foods and balanced meals. Onions, olives, chicken, whole grains, cabbage and loads of flavor mean this meal is sure to keep your taste buds entertained and your waistline in check. See more weight loss tips pictures.
©iStockphoto.com/svega

At any given time, the media touts several different diets as being the best new thing for weight loss -- not to mention the near-countless diets that have fallen by the wayside. But there may be no more sensible and delicious diet than the Mediterranean Diet.

The Mediterranean Diet isn't a diet in the sense of counting calories (though one should always keep an eye on them). Rather, it's a culinary shift away from unhealthy Western eating habits toward the typical diet enjoyed by people bordering the Mediterranean Sea.

Researchers have noted this diet (and its effects) for many decades, but it gained widespread appeal in the 1990s, largely through its promotion by Dr. Walter Willett and Dr. Frank Sacks of the Harvard School of Public Health.

As opposed to being a regimented diet -- one of those that focuses almost exclusively on eating or avoiding a certain food type (carbs or protein, for example) -- the Mediterranean Diet is more of a lifestyle change. In fact, it's not a specific diet at all, and any two people on the Mediterranean Diet may have quite different eating habits, though broad-stroke similarities would certainly exist.

While Mediterranean-influenced dietary decisions alone may not be responsible for weight loss (overall caloric intake and your activity level also play large roles), evidence does show it's a heart-healthy diet, especially when accompanied by lots of exercise and other good health decisions.

The Lyon Diet Heart Study revealed that people who switched to a Mediterranean-style diet after having a heart attack were at reduced risk of having another heart attack than those who didn't [source: American Heart Association]. In fact, subjects who adopted a Mediterranean-style diet were half as likely to have recurrent heart disease as those who ate a regular (but conscientious) diet. For this reason, it's a diet that may be ideal for people whose Western eating habits have negatively affected their health.

What foods make up a Mediterranean-style diet, and why is this diet beneficial to our health? Read on to find out.

Benefits of the Mediterranean Diet

Heart disease, obesity and diabetes have become prevalent in America and around the globe, and the Mediterranean Diet could help people everywhere change their health profiles, not to mention their silhouettes.

But what are the main features of a Mediterranean-style diet?

The diet includes more calories from fats, though from monounsaturated and polyunsaturated "good" fats. While a calorie from fat is no different (health-wise) than a calorie from carbs, the type of fat the calorie comes from makes a big difference when it comes to heart health. The trans fats and saturated fats that are typical in a Western diet put you at greater risk of diabetes and heart disease, while unsaturated fats have the opposite effect [source: Time].

Mediterranean Diet foods are high in antioxidants, which protect our cells from damage from free radicals. Additionally, fatty acids from nuts and certain oils have positive effects on our cardiovascular system.

A 2008 study published by the New England Journal of Medicine compared the weight loss of obese people placed on the Mediterranean Diet, a low-carb unrestricted-calorie diet or a low-fat restricted calorie diet. Results showed that the Mediterranean Diet helped participants lose, on average, about 9.7 pounds (4.4 kilograms) over two years, while the low-fat diet helped them lose an average of 6.4 pounds (2.9 kilograms) and the low-carb diet helped them drop about 10.4 pounds (4.7 kilograms) [source: Shai, et al]. Diabetics also responded well to this study, with increased control of insulin levels following their switch to a Mediterranean-style diet.

This diet, mixed with an active lifestyle, results in healthier hearts, longer lives and fewer heart attacks, strokes and Alzheimer's disease [source: Mayo Foundation]. A primary reason for this is the reduced presence of LDL "bad" cholesterol as a result of adopting a Mediterranean Diet.

As is so often the case with dieting, all silver linings have a dark cloud. We'll discuss some of the drawbacks of the Mediterranean Diet, next.

Drawbacks of the Mediterranean Diet 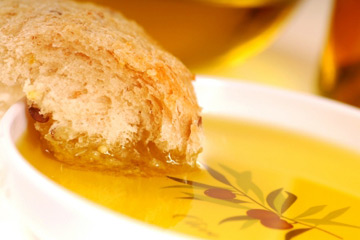 The Mediterranean Diet may be healthy, but nobody can eat tons of bread dipped in olive oil and expect to lose weight. The olive oil is just a small part of a healthy diet, so skip the fast food and enjoy it in moderation.
©iStockphoto.com/HHLtDave5

While a Mediterranean-style diet probably stands above all other diets based on sheer taste alone (not to mention the wine), it's not without its drawbacks. While the American Heart Association recognizes some benefits of this diet, it stops short of giving the Mediterranean Diet its official blessing, calling instead for more research.

One valid concern about the Mediterranean Diet is that people may just adopt heavier consumption of olive oil into their diets, but not make other changes.

It's interesting to note one of the original studies that shed light on the benefit of this diet. In the 1960s, people living on the Greek island of Crete were found to have greatly reduced rates of heart disease when compared to their American counterparts. After studying the issue, it became apparent that a Mediterranean-style diet was the deciding factor. However, since that time, Cretans have been shifting toward a more Westernized diet that's high in saturated fats. As this has occurred (and as their rate of exercise decreased), the Cretans' rates of heart disease began to more closely resemble those of their American peers.

Despite maintaining elements of a Mediterranean-style diet (which, around the Mediterranean, is an unavoidable feat), the benefits of doing so were largely nullified by the simultaneous presence of Western eating habits.

What this means is that adopting only part of the Mediterranean Diet may not be beneficial when we're still frequently eating fast-food hamburgers and potato chips laden with trans fats.

Additionally, eating bowls of nuts and breads drizzled in olive oil can make keeping up with how many calories you're consuming a near impossible feat, and too much of even the "good" fats is going to make you, well, fat.

Furthermore, alcohol isn't a good option for everyone, and it has its own health risks and concerns. While it may yield benefits to those with strong sense of restraint, having more than a glass of wine a day probably isn't going to be too good for your health in the long run.

Talk to your doctor or a dietician to learn if this diet is right for you. For lots more information on the Mediterranean Diet, see the next page.

Asian Americans Should Be Screened for Diabetes at Lower Weights
7 Great Ways to Stay Fit in Da House!
How to Find Your Healthy Body Weight