Is there a real way to lose belly fat?

Browse the article Is there a real way to lose belly fat? 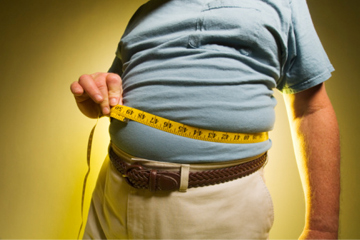 While this guy's subcutaneous belly fat is obvious, it's likely that he's storing visceral fat, too.
Creatas Images/Thinkstock

If you think that belly fat is just an issue for people who are overweight, think again -- even people who are at a healthy weight and exercise regularly can have it. There's no such thing as a "perfect" body, so what's the big deal if your stomach isn't flat? It isn't just a problem of aesthetics.

There are two types of fat: visceral and subcutaneous. Visceral fat is the kind that lies far below the surface, surrounding your organs. Subcutaneous fat is just below the skin and can be easily grabbed. You can spot visceral fat via an MRI or CT scan, but there's a simple test for it at home: If you have a large waistline or you're apple-shaped, you likely have visceral belly fat.

While neither type of fat is good, visceral belly fat carries some serious health risks. According to the U.S. Department of Health and Human Services, you're at risk if you have a waistline greater than 40 inches if you're a man and 35 inches if you're a woman (a lower threshold of 35 inches for men and 31 inches for women has been recommended by the World Health Organization for people of Asian ethnicity). We aren't entirely sure why, but belly fat is linked to increased insulin resistance, which can result in type II diabetes. It can also lead to heart disease, stroke, some types of cancer, sleep apnea and premature bone density loss, and there's even evidence that it may be a factor in developing dementia.

So what causes belly fat? Heredity is one factor. Belly fat has often been called "middle-aged spread" because as you age and your metabolism slows down, extra pounds tend to accumulate across the stomach. This is probably due to changes in levels of hormones such as cortisol, which is made in the adrenal glands and helps the body process glucose, regulate metabolism and manage stress. Speaking of stress, it can raise levels of cortisol, so it might lead to increased belly fat, too.

While it can be tough to do, there are ways to get rid of belly fat -- and not just plastic surgery -- but there's no magic pill. Read on for tips.

Plastic surgery such as liposuction can remove subcutaneous fat but not visceral fat. Researchers in Brazil have discovered that if you have lipo to remove the former, your body could compensate with an increase in the latter unless you have a diet and exercise regimen going.

You can't do anything about aging or heredity, but if you have developed belly fat, you can still work to combat it. A lot of people think that exercises targeting the stomach area, such as sit-ups or crunches, are the way to go. These types of exercises tone and tighten muscles, but they can't do anything about fat. Instead, focus on losing fat overall via vigorous aerobic exercise -- preferably 30 minutes or more most days of the week. Start slow and build up. You don't have to run to get good cardio; brisk walking, dancing and bicycling all count, too. Strength training, meaning lifting weights, may also help get rid of visceral belly fat. Building muscle raises your metabolism so you can burn more calories. You might also consider incorporating core-strengthening exercises like planks.

What you eat also makes a difference. To reduce belly fat, avoid foods that contain trans fats, a type of fat found in many prepackaged cookies, crackers and baked goods, as well as some fried fast foods. Not only can trans fats pack on the pounds, but research conducted at Wake Forest University has also shown that they can add fat specifically to your belly and even redistribute fat there from other areas of the body.

Sugar also increases belly fat. Eat whole grains as well as lots of fruits and vegetables. Foods high in fiber not only keep you full longer but they also lower insulin levels and may shrink fat cells. A diet rich in healthy monounsaturated fats like olive oil, avocados, almonds and peanuts may also cause fat to break down. Your best beverage is always going to be water. It flushes out fat and keeps down bloat, and drinking lots of it keeps you from thinking you're hungry when you're actually thirsty.

The final key to losing belly fat is to de-stress. Easier said than done, right? One way to lower stress is to get enough sleep, ideally eight hours each night. Find ways to diffuse stressful situations -- through yoga, meditation or journaling.

There are several pills available over the counter that promise to reduce levels of cortisol in your body or to specifically burn belly fat. However, these pills aren't regulated by the FDA, and there's no scientific research to back up their claims. Notice that all weight-loss pills will say something like "in conjunction with a healthy diet and exercise." There's nothing you can take that will let you burn belly fat while you just sit around and eat junk food, so be wary.

Author's Note: Is there a real way to lose belly fat?

When I found out that I'd be writing about getting rid of belly fat, I joked that I could make it a short article by answering the question with "plastic surgery." But in all seriousness, I know from personal experience that there's no easy way to lose fat and keep it off in the long term. The diet industry is a multi-billion dollar one for a reason; we want there to be a special secret to it, when in reality eating well and exercising are the tried-and-true methods. I knew that in general there are plenty of health risks that come with being overweight, but belly fat is especially worrisome. All the more reason to keep fighting the good fight.