How to Use Yoga to Ease Back Pain 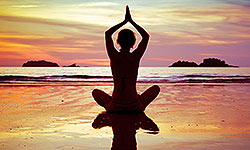 Yoga can help strengthen the muscles in your back.
iStockphoto/Thinkstock

Low back pain is the most common type of pain reported in the United States. It strikes men and women, sick and healthy, old and young; in fact, back pain is the leading cause of disability for people under 45, and it frequently plagues more than 26 million Americans between ages 20 and 64. [Source: American Academy of Pain Medicine]

Medications, physical therapy, injections, and even surgery are all treatment options for chronic back pain -- but wouldn't it be helpful if there was a free, at-home treatment, with few side effects, that could also ease the pain? According to recent research, there just might be.

A 2011 study from the Group Health Research Institute found that chronic back-pain sufferers who followed a regular yoga practice for three months reported less pain and better back-related function than those who didn't. The group who took yoga was also able to cut back on their pain medications for at least six months. [Source: Sherman]

But was it something about yoga specifically that made them feel better, or was just the act of stretching and moving? A third group in the study, who was given a regular stretching routine, also reported a similar amount of improvement.

Yoga instructor and life coach Sophie Herbert says that the physical benefits of yoga -- stretching and strengthening, specifically -- do play a large role in the pain-relief benefits it can provide. "As you build your practice, you will strengthen your core," she says, "which can help with back pain and mobilization. And the stretches and restorative poses, like Legs Up the Wall, can help make you more flexible and relieve tension that's built up in the back, the legs, and the hips."

And, although the study results don't suggest it, Herbert says that the mindfulness required for yoga can also help some people deal with issues like chronic pain. "The deep breathing and meditative parts of class can help you relax and let go of a lot of stress you've maybe been holding on to. It can help you be more mindful of your posture outside of class, as well, which definitely contributes to back health overall."

In 2012, another study found that British government employees who did yoga at work once a week (with the option to also practice at home twice a week) reported lower levels of stress and less back pain after eight weeks than those who did no yoga. [Source: Hartfiel]

So where do I start?

Herbert doesn't recommend fast-paced or very athletic forms of yoga -- like Vinyasa or Ashtanga -- to people suffering from back pain. Instead, look for Hatha Yoga or Restorative Yoga classes, which should be slower and more tailored to people looking to unwind or relieve pain, tension, or sore muscles.

Sadie Nardini, a yoga instructor and blogger for Gaiam.com, recommends "Rodney Yee's Back Care Yoga DVD" or the "Mayo Clinic Wellness Solutions for Back Pain DVD" (both produced by Gaiam) as good places to start a practice at home. She says that poses like Standing Forward Bend, Downward Facing Dog, Pigeon, and Child's Pose are all good for people with back pain, although you should consult your doctor before starting any new practice. [Source: Nardini]

While the researchers were surprised to see that stretching worked as well as yoga, they did admit that an hour-long class is actually a lot more like yoga than what most people consider "stretching" -- something that's usually done for five minutes before or after exercised, and not really focused on as a discipline in itself.

They concluded that either yoga or stretching -- in a therapeutic setting that's geared toward beginners -- can be good, safe options for people with moderate back pain. If you do attend class with a chronic pain or injury, be sure to tell your instructor about it beforehand, so he or she can suggest modifications for poses that might be uncomfortable, or even dangerous, for you.

90/10 Weight-loss Plan: What You Need to Know
Top 10 Ways to Maintain Your Weight
Tips From Trainer Rob Garcia