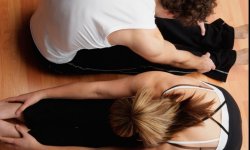 Haven't seen "Integral Yoga" on your yoga studio's schedule? You will probably never will. That's because Integral Yoga is not just one style of practice or one sequence of moves. Rather, it's a combination of several different branches of yoga, along with an entire lifestyle, philosophy and set of spiritual beliefs. The goal of Integral Yoga, according to its founder, is to "realize the spiritual unity behind all the diversities in the entire creation and to live harmoniously as members of one universal family." [Source: Yogaville.org]

Integral Yoga is the term given to the way of life practiced and taught by Sri Swami Satchidananda, an Indian guru who first visited the United States in 1966. He believed that Integral Yoga is "the birthright of all," and that the way to achieve this birthright is by maintaining "a body of optimum health and strength, senses under total control, a mind well-disciplined, clear and calm, an intellect as sharp as a razor, a will as strong and pliable as steel, a heart full of unconditional love and compassion, an ego as pure as a crystal, and a life filled with Supreme Peace and Joy." [Source: Yogaville.org]

Each of these areas is addressed in one of the six branches of Integral Yoga:

Several teaching centers for Integral Yoga opened in the 1960s and 1970s, as Sri Swami Satchidananda spread his gospel at festivals and yoga retreats across the country, including Woodstock in 1969. In 1970, the quarterly Integral Yoga magazine was founded. Sri Swami Satchidananda taught throughout the United States and India until his death in 2002, counting many American actors and musicians among his disciples. [Source: iyiny.org]

Today, Integral Yoga is practiced at centers throughout the United States and the world, including its more than 40 Institutes in California, New York, New Jersey, Canada, India and beyond. It is also the way of life for the residents of Satchidananda Ashram Yogaville, a 200-person community in Buckingham County, Virginia. [Source: iyta.org]

Though classes at various Integral Yoga institutes will differ in the length of the class and poses performed, there is usually a focus on inner awareness and breathing.

Which Pushup Is the Perfect Pushup for You?
Is there a real way to lose belly fat?
How to Energize a Walking Routine