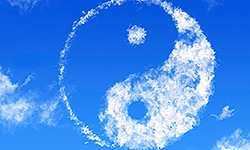 Yin yoga, is a slow, gentle type of yoga meant to stretch and strain the inflexible connective tissues that surround our joints.
iStockphoto/thinkstock

The terms "yin" and "yang," in Taoist philosophy, are opposing forces that balance each other out: Yin is stable, unmoving, and hidden, while yang is constantly changing and revealing. Yin and yang can also be used to describe different tissues in the body -- stiff, inflexible bones and connective tissue (like cartilage and tendons) are yin, while soft and elastic muscle fibers are yang.

With this in mind, now think about yoga. Most types of yoga are good for stretching our muscles; therefore, from a Taoist perspective, these are known as yang yoga. Yin yoga, on the other hand, is a slow, gentle type of yoga meant to stretch and strain the inflexible connective tissues that surrounds our joints, specifically our hips, pelvis, and lower spine.

Martial arts expert and Taoist yoga teacher Paulie Zink introduced Yin Yoga in the United States in the 1980s. It was later popularized by one of Zink's students, Paul Grilley, and by one of Grilley's students, Sarah Powers, who gave Yin Yoga its name.

A yin yoga class is made up of three components: steadiness, stillness, and softness. During a yin yoga class, you'll hold poses for much longer than you would in traditional yang yoga -- for three to 10 minutes at a time. For most yin poses, your muscles should be soft and relaxed; otherwise, it's hard to really stretch the connective tissue and the joints. Because of this, poses that require muscle activation (think inversions, arm balances, and standing poses) do not work as yin yoga poses. Instead, the practice focuses on seated and reclined poses, such as hip openers, backbends, and twists. [Source: Grilley]

In addition to stretching connective tissue, proponents of Yin Yoga also believe that holding postures for several minutes at a time can unblock and release qi, the flow of "life force," or energy within our bodies. We often hear about the release of qi when talking about Chinese medicine and acupuncture, an area that greatly influenced the founders of Yin Yoga.

Yin Yoga is often considered an advanced practice, meant for people who already have plenty of experience with yang-style yoga. This is because holding poses for long time periods, and being able to truly relax the muscle tissue around a joint, both take intense concentration and knowledge of one's body. If you push too hard in yin yoga, you won't have sore muscles -- but your joints may feel sprained or misaligned. Because of this, it's important to pay attention to subtle signs that you may be overdoing it. [Source: Ackerman]