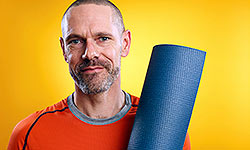 Men benefit from yoga just as much as women do!
iStockphoto/Thinkstock

Most men think a workout includes a set of heavy barbells, but there several good reasons for them to join the seas of Lululemon pants and ponytails in a local yoga class.

Less than one in five people in any given yoga class in the United States is male, according to Yoga Journal's Yoga in America 2012 survey. [Source: Yoga Journal]

Men's reasons for not coming to the mat include inflexibility, intimidation, or a preference for faster, more competitive, or more traditionally guy-centric sports. But if they gave it a try, these yoga-averse men might find that they can benefit from a regular practice in lots of ways; in fact, (don't tell their friends,) they might even enjoy it!

The benefits of yoga for men are, really, the same as the benefits for women: increased flexibility and strength, stress relief, and a sculpted core, to name a few. But because men are built differently -- and think differently -- than women, they may approach the practice for largely different reasons.

"I think a lot of men conceive yoga practice as easy," says Laura Burkhart, a yoga instructor in San Francisco. "They think we just sit and meditate. But once they come to a class, they actually find that it's more challenging than they expected and that it really does make them feel good."

Unlike other workouts that may target specific body parts, yoga is a full-body workout, strengthening and stretching nearly every muscle in your body. And for men that enjoy other sports, yoga can prevent muscle soreness, improve focus and boost energy. No wonder professional athletes like LeBron James and Ray Lewis and even entire professional sports teams have been perfecting their practice.

Another big benefit of yoga, for both sexes, is the fact that it can help prevent injury in other sports. "If men do other activities, like baseball, running, cycling, weight-lifting, they've probably got tight hamstrings, tight hips, you name it," Burkhart adds. "They'll find that yoga can help them stretch out those areas so that they're better prepared and less likely to hurt themselves later on."

Yoga pro Baron Baptiste agrees that men tend to suffer from tightness in the hips and hamstrings, and in the shoulders and intercostal muscles around the rib cage, as well. And even men who strength train often miss hard-to-tone muscles, like the lower back and knees. [Source: Greenfield] Yoga can help address these areas, either on its own or as a compliment to any training routine.

Weighing the Risks and Finding a Class

Yoga, like any sport, doesn't come without its risks, however. And some research suggests that the risks to men could actually be greater than those to women. When New York Times reporter William J. Broad, author of "The Science of Yoga: The Risks and the Rewards," began reading mail from readers about his book, he realized that many more men were writing in with tales of yoga injuries than women.

When he investigated, he found that although men made up about 16 percent of the yoga population they seemed to account for between 24 and 30 percent of injuries occurring during yoga practice -- injuries like torn muscles, damaged ligaments, broken bones and dislocations. One instructor told him that because men have more muscle than women, "they can thus force themselves into challenging poses they might otherwise find impossible." Unfortunately, that can also lead to pain, muscle strain and injury. Broad also found a wide body of evidence citing the inert flexibility differences between men and women, specifically in the pelvis area. [Source: Broad]

One way for men to avoid particularly strenuous and potentially dangerous poses is to attend classes designed just for men. Some cities have guy-only studios, such as YoGuy in Vancouver, Canada; Broga, in Martha's Vineyard, New York City, San Diego, and Manitoba, Canada; and Le Male Yoga in New York City.

If you can't find a male-focused class near you, however, don't be discouraged. The number of men in yoga classes is on the rise, and most instructors are happy to have a better gender balance in their studios. Introduce yourself to your instructor before class and mention any injuries, concerns, or flexibility issues you have. He or she will be able to suggest modifications to any postures that might be too difficult, so you can have a safe and enjoyable workout.