Browse the article Yoga Makes People Super Emotional. But Why? 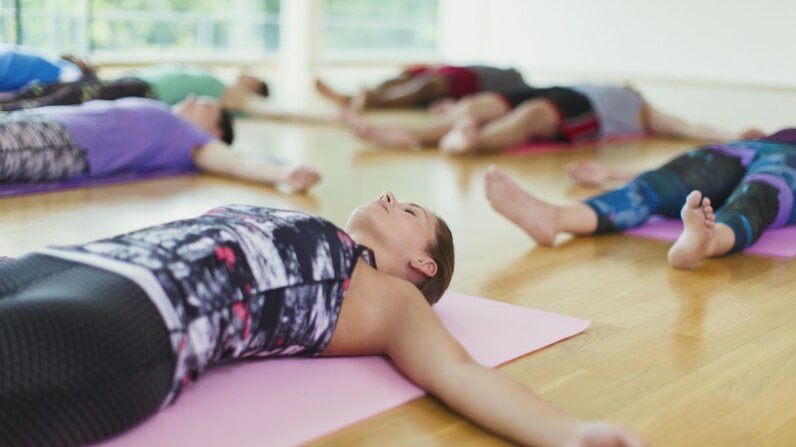 Shavasana, or corpse pose, is one of many yoga postures that brings intense emotions to the surface. Caiaimage/Paul Bradbury/Getty Images

"Crying is one of the highest devotional songs. One who knows crying, knows spiritual practice. If you can cry with a pure heart, nothing else compares to such a prayer. Crying includes all the principles of Yoga."

Somewhere around the start of the 21st century, mainstream America discovered yoga. And with that, a lot of new yogis found themselves crying in public for no apparent reason.

Mind-body disciplines — including yoga, acupuncture, chiropractic and meditation — have gained significant followings in the United States over the last decade or so. But yoga's rise was meteoric: Yoga Journal's annual "Yoga in America" study found that fewer than 2 percent of U.S. adults practiced yoga in 2003. In 2016, nearly 15 percent of Americans over age 18 were engaged in the discipline, and another 34 percent were thinking about giving it a try.

Yoga is a tough discipline to define. The National Institutes of Health describes it as a "meditative movement practice" combining "physical postures, breathing techniques, and meditation or relaxation." But it's not really something you do, at least not in the way you do push-ups. It's more a state of mind.

Technically, the highly physical practice that Westerners think of as yoga is just one of a large body of yogic disciplines, some of which are far more spiritual than sweat-inducing. Most scholars trace yoga's roots to ancient Indian religious practices, typically associated with Hinduism. The Sanskrit word yoga means "connection," and holistic-wellness website Big Shakti explains that yoga is "both a state of connection and a body of techniques that allow us to connect to anything." In more concrete terms, the yoga state is variously defined as relaxed attentiveness, balance between body and mind, and tranquility.

Yoga teacher and mindfulness coach Daniel Shankin, who developed the "Applied Mindfulness" approach to well-being, thinks of yoga as "being present."

Whatever yoga is, it can facilitate intense emotional release. Many sources cite resting asanas (yogic postures) like Corpse pose (Shavasana) as common settings for tears. Backbends, which are considered heart openers in yoga, make the list as well. But hip openers, particularly Pigeon pose (Eka Pada Rajakapotasana), seem to win the anecdotal vote.

"I'm going to make a t-shirt one of these days that says, 'in pigeon pose, nobody can see you cry,'" Shankin writes in an email. "One time, I cried in pigeon pose every time I went to class for three months." He wasn't in pain, he says — he was deeply sad.

One stage of Pigeon pose looks something like a forward split, but the front leg bends and rests on the mat, causing the hip flexor to open. In the another variation of the pose, Sleeping Pigeon, the upper body folds over that front leg, and the forearms and forehead may rest on the mat in front of the knee. One-legged King Pigeon, an advanced expression of the pose, incorporates a backbend, where the foot of the back leg touches the head.

Joseph Lopez, a Denver-based yoga instructor, has also cried in Sleeping Pigeon. "For me, it's always the hip openers that trigger emotions the most," Lopez writes in an email. "I don't always cry. Sometimes I get really, really pissed off."

Lopez, who has been practicing for 10 years and teaching for seven, thinks it may be a matter of where we store the "emotional gunk" of feelings we don't express. "I carry my anger in my hips," he explains, "so when I open them, that's what gets released."

That's a common take on the phenomenon, which seems to draw from the Eastern philosophy of chakras. There are seven traditional chakras that mark the points in our bodies where energy flows. In this understanding of wellness, a block in that energy flow can cause physical and psychological damage.

The second chakra, Svadhisthana, is linked to emotions and tears and centered around the pelvis. Unblocking that chakra by opening the hips could lead to a sudden flood of emotion — something like the unconscious exploding into consciousness.

"You can't really hide from your own [crap] while practicing asana. Which is part of the reason to do it. To uncover what's blocking you and work those things out of the body," Lopez writes

Some scientists and medical professionals frame that blockage as a function of the sympathetic nervous system, which reacts to stress by activating the fight-or-flight response. Nerve signals tell the body's muscles, including the hip flexors, to contract, gathering energy in preparation to run, fight or freeze. When that energy goes unused, the theory goes, the traumatic experience gets stuck in our bodies. Hip-opening poses, then, could release stored emotions from past traumas.

The (Mysterious) Science Behind Yoga Tears

The emotional-gunk explanation for yoga crying (or fuming) is more interesting than the scientific one. Science has started looking at the effects of yoga on the mind: A March 2017 study found that yoga can ease the symptoms of major depressive disorder, and other research has found it induces "transcendence of the ordinary" and reduces anxiety and stress. But science hasn't done much to elucidate the mechanisms responsible for yoga's emotional liberation.

Dr. Timothy McCall, author of "Yoga as Medicine," practiced internal medicine before deciding to study and teach yoga therapy full time. To his knowledge, "the triggering of often unexpected emotions during a yoga practice ... is not something that has ... been investigated scientifically," he says in an email.

McCall once cried after performing a series of backbends. One plausible explanation, he says, is simple awareness. "Have you ever had the experience, say on the beach or in the middle of the woods, when you get quiet inside and just become part of ... what's going on around you? Sometimes, in that moment you'll get an epiphany, maybe you need to quit your job or get out of an unhealthy relationship," he writes. The knowledge has always been there, but we may overlook it in the grind of everyday life.

And it can work that way with emotions, too. "They may be buried deeply or sometimes just below the surface, yet out of our conscious awareness. When we get quiet and introspective in a yoga practice, those emotions might come to the fore," McCall speculates.

It may be that yoga's focus on conscious breathing, postural alignment and physical sensations, as well as the interactions between those factors, leaves no room for the noise of daily life. Suddenly, we can hear something deeper.

Ultimately, neither science nor yoga practitioners really know why yoga can bring emotions to the surface. Maybe they never will. But McCall says these types of breakthroughs are useful; as a yoga teacher, he tries to let them be.

For many practitioners, part of yoga is letting go of the hows and whys. To this day, Daniel Shankin has no idea why he cried in pigeon pose for three months — but that doesn't matter. For him, what matters is that he "finally felt safe enough to express it and let it go."

"At the end of the three months, the crying stopped on its own," Shankin writes, "and my hips were much more open, as well."

Now That's Cool
In 1982, a Harvard study found that through meditation, Tibetan monks could raise their body temperatures to 100 degrees Fahrenheit (38 degrees Celsius). Researchers reproduced the finding in 2013.