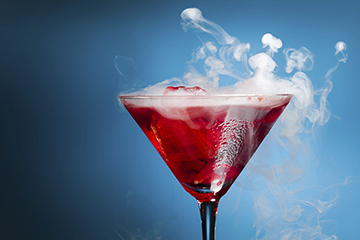 Inhaling vapor from an alcoholic drink is entirely different from sipping a cocktail, and devices called vaporizers can help you to do it.
nikkytok/ThinkStock

It's no secret that people (some of them, anyway) will go to great lengths to get a buzz. Humans have turned to all sorts of substances and contraptions in the name of getting high, and there seems to be a never-ending stream of newfangled methods available. Alcohol vaporizers are now taking their turn in the spotlight as the latest questionable device du jour.

Alcohol vaporizers take hard liquor and -- typically through pressurization, heat or contact with dry ice -- turn it into mist that you can inhale. Vaporizer manufacturers tout their products' ability to get you buzzed fast: Inhaled alcohol goes into your bloodstream full-strength, directly from your lungs, allowing you to feel its effects more powerfully and quickly. No waiting around for that pesky digestive system to do its job -- you get an almost instant high, with little to none of the side effects that can plague people who actually drink alcohol the old-fashioned way. It's also calorie- and hangover-free, or so goes the sales pitch.

One major red flag is the fact that inhaled alcohol bypasses your digestive system. This is publicized as a plus by vaporizer companies, but the digestive system is a natural defense against toxicity. If you drink too much alcohol, your system will start rejecting the alcohol, which will exit your body in the form of vomit. No one likes to throw up, but it can be a very good thing if it saves you from alcohol poisoning.

When you inhale too much alcohol, there's nothing your lungs, brain and blood can do about it. Because the alcohol hits your blood quickly, it can also give you alcohol poisoning quickly -- especially when the digestive system is taken out of the equation. Unlike when you drink, it can be hard to tell exactly how much alcohol you're inhaling. And it can be extra hard to keep track when you're getting drunk much faster than you're used to.

The no-calories claim is also a dubious one. Because the digestive system isn't involved when you inhale alcohol, it's tempting to believe that all those empty calories aren't being digested -- they're vanishing into thin air, so to speak. But calories are digested in the bloodstream, and we know that inhaled alcohol gets into your bloodstream fast. The mist might contain fewer alcohol molecules than liquid does, but it still gets metabolized and releases calories at the same rate per gram [source: Schaffer].

There haven't been any human studies on the effects of alcohol vaporizers, so there's no hard evidence about the veracity of the no-hangover claim. And we haven't even mentioned the havoc that inhaled alcohol doubtless wreaks on your lungs and respiratory system. Just in case you haven't come up with enough reasons to decline an alcohol vaporizer if you ever encounter one.

Got Milk? It Might Depend on Whether It Came From a Cow or a Plant
The Benefits of Coconut Oil
Hand, Foot and Mouth Disease