Do the Combat Pills on ‘Jessica Jones’ Exist IRL?

by Alia Hoyt Dec 22, 2015
Krysten Ritter with a liquor bottle and scars on her face is seen on the set of 'Jessica Jones' filming in Tribeca, New York in March 2015. JosiahKamau/BuzzFotoviaGettyImages

If you have a subscription to Netflix and a little extra time for binge-watching, chances are you've already indulged in the new breakout show “Marvel's Jessica Jones.” Comic book enthusiasts are eating up the introduction of a long-beloved, but lesser-known franchise, rife with so much potential for obscure references and character updates. (Spoiler alert: Plot points for the later episodes included below, so read at your own peril!)

One such update has helped to spur along the popularity of the new series, in the form of a character named Will Simpson, a reworked version of the original comic book character Frank “Nuke” Simpson.

“He's a veteran scarred by war who feeds his need of violence under the guise of love for his country and punishing its perceived enemies,” explains comic book enthusiast Josh Wilson in an e-mail interview. “He's the most dangerous kind of character, someone who commits violence without a second thought, under some idea of a greater good that only he can see.”

These tendencies are wildly magnified thanks to the cocktail of pills Simpson takes for different combat performance purposes: red pills to give him energy and keep him from feeling pain, blue pills to mellow him out and white to maintain balance. Unfortunately, the pills have some pretty dire side effects, including violent tendencies and just plain crazy behavior.

Could These Pills Be Real?

Since art so often imitates life, this has some folks wondering whether or not pills that can turn regular Joes into super-G.I. Joes really exist. The short answer? No. There's not some mega-drug (or combination of drugs) that's going to start churning out a boatload of Captain Americas anytime soon. Of course, if there were, it's unlikely that anyone would cop to it ... until it's too late (moo-ahh-ha-ha-ha).

The long answer, however, isn't quite so neat and tidy. An estimated 11 percent of U.S. enlisted men and women reported abusing prescription drugs, a significant uptick from 4 percent in 2005 and 2 percent in 2002, according to a 2008 Department of Defense survey. However, the same report noted that the percentage of illegal drug users in the military was significantly below that of the regular population (2.3 percent had used illegal drugs in the past month, compared with 12 percent of the civilian population).

Alesandra Rain is co-founder of Point of Return, a nonprofit organization that helps people around the world overcome prescription drug dependence, including some current and former military.

“A number of people have told me that when they first get into the military they're told they can't be on meds, but when they go in they are put on them,” says Rain. "Sometimes it's stimulants to stay awake, and then Xanax to sleep because they've been in combat." HowStuffWorks approached the U.S. Army for additional comment on the topic, but they did not respond by deadline.

The Department of Veterans Affairs (VA) and the Pentagon, however, insist that drugs are not the only treatment offered; therapy and other management efforts are made available to troops and veterans. In fact, the number of therapists employed by the Defense department rose 43 percent between 2009 and 2013.

With that in mind, what might be the real-life equivalents of Simpson's fictional combat pills? Let's examine them.

Red (uppers): “As a security driver for our platoon, I personally tried to get my hands on every last stimulant I could find (dip, cigs, fat burners, energy drinks), so that I'd be able to stay awake and alert out on the road,” explains Matt (who prefers to remain anonymous), a U.S. Marine who deployed to Iraq in 2008 and 2009, in an e-mail interview. “[I] never saw/used anything not commercially available, though I would've seized on it in a heartbeat if I did.”

Matt credits severe sleep deprivation with the development of this habit. “Unfortunately, no matter how much rest our standard operating procedures say drivers need before going out on the road, it's rarely the case that we were going out on more than four to five hours of sleep (eight hours is supposed to be the buffer). And with the vast majority of missions taking place during night-time hours in order to minimize exposure to potential hostiles, you had to do what you needed to do to stay up and on the lookout.”

According to Matt, the most commonly used and abused substance with stimulant effects are actually fat-burning pills. “Based off of personal experience you could rake in seven figures doing nothing but marketing and selling fat burners to military personnel out in the field/on deployment,” he says. Although they are easy (and legal) enough to purchase, fat-burners are often the subjects of scrutiny in wrongful death lawsuits.

Blue (downers): What goes up must come down, but what happens to people who have a hard time mellowing out? Some soldiers who rely on uppers to get through the day need help from downers to sleep at night, whereas others turn to them to combat significant war zone anxiety. The Los Angeles Times reported in 2012 that nearly 8 percent of the active-duty Army was on sedatives.

White (stabilizers): The same Los Angeles Times report said that 6 percent of Army soldiers were on antidepressants, an eight-fold increase since 2005. Although the idea behind antidepressants is to make people feel more even keel, the reality is sometimes anything but, with anxiety and agitation among the potential side effects.

Unfortunately for military enlisted, the pressures and expectations placed on their minds and bodies are often unrealistic, driving many to seek pharmaceutical intervention. “The human body doesn't magically change when you go on deployment, but a lot of people seem to think that we're a bunch of super-soldiers out of a Marvel comic ... it's infuriating,” says Matt.

So the next time you watch “Jessica Jones” or another fantasy-based show or movie, take a beat to be thankful that, for the time being, it's all fictional. Sometimes, real life is difficult enough to negotiate, without throwing super-drugs into the mix.

Now That’s Interesting
The 2013 Department of Defense Suicide Event Report indicated a rate of 18.7 active duty per 100,000, which is comparable with the general population. Reservists and National Guardsmen, however, commit suicide at much higher rates (23.4 percent and 28.9 percent, respectively). 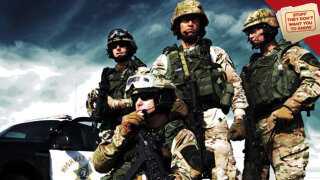 Stuff They Don't Want You to Know: When The Police Become The Military 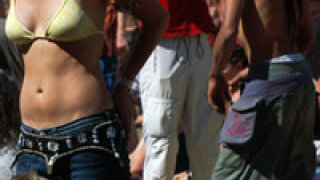