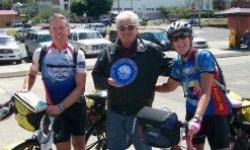 Carl McDonald after finshing a bike ride across the country to raise money for MADD.
Courtesy of Carl McDonald

Carl McDonald is a retired lieutenant in the Wyoming State Patrol and the National Law Enforcement Initiatives Manager for Mothers Against Drunk Driving (MADD). He is a victim of drunk driving, and last year, he rode his bike across the country with his sister to raise more than $20,000 for MADD.

-- As told to Mara Betsch

In any state trooper’s career, DUI enforcement is a huge part of the job. Especially in Wyoming, there’s little to no public transportation and the drinking culture is strong.

I think all of us that work in the law enforcement field believe that all the good we’re doing -- the drunk drivers that we get off the roads -- somehow grants us immunity from the crimes we see. You’d think that karma would protect us. It was a crushing blow when my own daughter was killed by a drunk driver

At the age of 5, my daughter Carlie was killed by a drunk driver, and the drunk driver was her mother.

I was a single parent with sole custody of my daughter, and my ex-wife’s alcohol problem was a big part of our divorce. Our visitation orders stated that we alternated Christmases and other holidays. Carlie was with her mom that Christmas, and on January 1, 1998, her mother put her in the front seat of the car, restrained only by a seat belt. She should have been in the backseat in her booster seat -- there was even a booster seat in the car! My wife headed out of town, got on the interstate, and drove into a slower-moving tractor trailer at 75 mph. The collision hit the right side of the car in the worst way, and Carlie died on the highway. It took place on a highway I was supposed to keep safe.

I pulled up at my house to find one of my state troopers at my doorstep. This was not an unusual circumstance since I was a supervisor. He told me what happened, and I was utterly stunned. Then came a crushing blow mixed with every emotion -- regret, anger, despair. It was all there.

Though I remained with the Wyoming State Patrol, every day was difficult. I describe the five years following Carlie’s death as healing and licking my wounds in a cave. I spent a lot of time alone, and it sometimes it took all my strength not to overreact in certain situations on the job. One night, a intoxicated gentleman had killed his passenger. We arrested him on the scene, and he became very violent and angry, like he did nothing wrong. It was a bizarre, unworldly reaction, and I had to fight through the emotions that were overwhelming me to stay calm and do my job.

After Carlie’s death, Mothers Against Drunk Driving (MADD) provided a victim advocate to help me sort through everything. They offer top-notch services in helping DUI victims navigate the legal system as well as manage emotions. On a personal level, I was trying to do my own form of advocacy. Within a year of the accident, I had developed a public service announcement and made a 20-minute documentary about Carlie’s death. It was an incredible piece that walked through the whole event. It got a lot of attention, and through several speaking invitations, I got to know the national players in traffic safety, including many members of MADD. In 2006, the National Law Enforcement Initiatives Manager position became available at MADD, and I was eligible to retire from law enforcement. I was lucky to get the job and further my advocacy.

My proudest work is behind the scenes, pitching in on the issues that come across our floor. It’s complicated to maintain a nonprofit that has a solid mission and direction, and we get pulled in different directions. I’ve been part of the biggest achievement the organization has ever made, which is the Campaign to Eliminate Drunk Driving. Among many accomplishments, we have researchers coming up with a system for a car to recognize if a driver is sober. It’s so rewarding to be able to help eliminate this preventable crime.

For victims of DUIs, I have one piece of advice: Be gentle with yourself. The shattering of your life is something that’s very difficult to deal with. It’s OK to respond the way you do, because grief, loss, and all these emotions brew within you, and your reactions can be pretty strange. But there are avenues to go through, and MADD provides a lot of ways to grieve. Just remember that it takes a lot of time and patience to heal.

As one of the largest victim services organizations in the U.S., MADD supports drunk and drugged driving victims and survivors at no charge, serving one person every eight minutes through local MADD victim advocates and at 1-877-MADD-HELP.

Just an Hour a Week of Brisk Walking Reduces Disability
Is there a link between alcohol and diabetes?
5 Office Exercise Tips