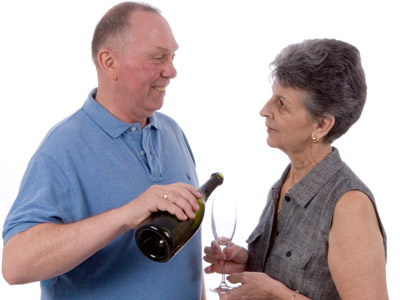 Can I see some ID?
© iStockphoto.com/khaig12

Teenagers in the United States spend a lot of time wishing their country was more like Germany or Guatemala or Ghana. In most other countries, the legal drinking age is 16 or 18, but U.S. teenagers must wait for their 21st birthday to roll around before they can lawfully purchase alcoholic beverages. Once we hit our country's designated requirements, the concept of age and alcohol is likely to be an issue of taste: Is this wine properly aged? How long was our whiskey left to mature in its cask? The question of whether people can be too old to drink, just as they were once too young to, rarely comes up.

Why should it? Media outlets routinely run features that proclaim how beneficial a glass of alcohol can be. Studies have shown that alcohol can lower the risk of heart attacks and heart failure, and that's any alcohol, not just the headline-hogging red wine [source: Bakalar]. Wine is the drink of choice, however, for slowing the onset of Alzheimer's disease and vascular dementia, as beer might increase the risk of both conditions [source: Brody]. A drink a day seems to improve bone density and prevent osteoporosis and moderate drinking may also help prevent strokes [sources: Dawson, American Academy of Neurology].

It's probably best to take these studies with a grain of salt, and they shouldn't encourage anyone with a history of alcohol problems to tip one back. After all, most of these studies only point out associations, and researchers have little to no idea why a glass of alcohol might have the healthful results that it does. But the real key to remember is that these benefits come with moderate alcohol use, along the lines of one to two drinks a day. Any more than that, and you're likely increasing your risk for the very conditions you might be trying to prevent. And experts caution that not everyone should take these studies as an excuse to have a cocktail. When it comes to aging populations, that one drink a day should be carefully considered. Find out why on the next page. 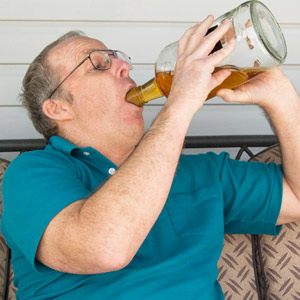 How do my sleep habits change as I age?
American Women, Seniors Drinking More Than Ever
What is the relationship between alcohol and gout?