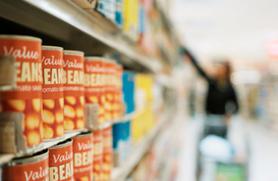 Are canned foods bad for you?
George Doyle/Thinkstock

Unless you've been living under a rock, you're most likely aware by now that an endocrine disrupting chemical known as Bisphenol-A (BPA for short) has been popping up in all manner of consumer goods, from ground beef, to baby bottles, to plastic food storage containers. Now, a new report called "No Silver Lining," from The National Work Group for Safe Markets, a coalition of public health and environmental health groups, confirms earlier findings of BPA in our canned goods — and at higher levels than previously detected.

The researchers tested food from 50 cans (collected from pantries in 19 US states and one Canadian province) for BPA contamination and found it in 46 cans (92 percent of samples). Detected levels of BPA ranged from below 1 parts per billion (ppb), to over a part per million, with an average of 77.36 ppb. The study authors say that consuming BPA at that level for three meals a day every day could easily add up to levels associated with cancer and reproductive problems in lab studies.

Getting itchy to clean out your pantry? You're not alone. "I choose foods in glass jars or cardboard packs whenever possible," says Gina Solomon, MD, a senior scientist with the Natural Resources Defense Council who has testified before Congress about the need for better BPA regulation and chemical policy reform."I'm also aware of trying to eat out less, since most of the food you get in restaurants came out of a can."

Even if you can't get rid of every canned good on your grocery list, try to avoid the ones on the list on the next page.

Canned Foods With the Highest Levels of BPA (above 100 ppb):