Is Drinking Diet Soda Bad for You? 5 Health Risks 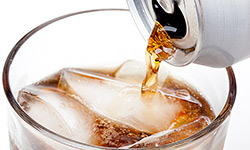 There are plenty of myths and rumors surrounding diet soda. It seems like the perfect solution: Get the sugary taste of soda without the unwanted liquid calories. However, as food scientists begin to examine how the artificial sweeteners affect our bodies, they are finding some interesting, and not completely positive results.

But unlike its sugary counterparts, including Coke, Pepsi and plenty of others, the research done on artificially sweetened drinks is new and far from conclusive. Whereas the American Heart Association linked more than 180,000 deaths around the world to sugary drinks [American Heart Association], experts are often hesitant to condemn diet drinks with the current body of research.

So what do we know about diet soda? Enough to make us skeptical. Though many of the studies conducted have been based on survey and self-reported information, and often find associations as opposed to cause-and-effect results, there is little stating any real benefit to drinking soda – no matter if it contains sugar or artificial sweeteners. And some of the studies show associations that make it obvious that these calorie-saving drinks may not be doing our waistlines or well-being any favors. Read on to see five health risks that have been linked to artificially sweetened drinks.

They May Trick Your Brain

Artificial sweeteners (like Equal, Splenda, etc.) trick your brain into thinking it is consuming real food. But when your body realizes that it's not getting the usual nutrients found in snacks and meals, it tends to become confused. So when you consume real sugar, your body may not respond properly and release blood sugar-regulating hormones. This may have a greater effect on your metabolism, as well. A 2008 study found that drinking just one diet cola a day was associated with 36% greater risk of developing metabolic syndrome, a grouping of conditions including high blood sugar, a fatter midsection and unhealthy cholesterol levels that can increase the possibility of developing heart disease, stroke and diabetes. [Diabetes Care]

They May Make You Crave More Dessert

Artificial sweeteners taste sweeter than sugar (Splenda, or sucralose, is 600 times sweeter than regular sugar), and some argue they may also increase appetite and may make you crave other sweet products. Some food scientists speculate that's because consuming artificial sweeteners may overstimulate the sugar receptors, making less-sweet foods like fruits and vegetables far less appetizing and leading you to consume sweet, more calorie-dense food.

Though the research is limited, small initial studies show that the more diet sodas an individual drinks, the less activity scientists saw in the region of the brain that regulate the brain's reward system.

They're Hard on Your Body

They Can Be Hard on Your Heart and Kidneys

Drinking diet soda may or may not keep your waistline slim, but it may put you at an increased risk of heart disease, diabetes and stroke. That's even if you maintain a healthy BMI. For example, 2012 study had 2,500 men fill out food frequency questionnaires to measure how many soft drinks (diet and regular) they consumed each month. The researchers followed up in 10 years to discover that those who drank diet drinks every day had a 43 percent increase in vascular events, including stroke and heart attacks. And that was after the study authors controlled for risk factors such as physical activity, daily calories and smoking habits! [CNN]

And even more alarming, a 2011 study examining data gathered on more than 3,000 women found that drinking more than two servings of artificially sweetened beverages her day was linked to a 30 percent decline in kidney function as they aged. [Clinical Journal of the American Society of Nephrology]

They May Not Make You Skinnier

In 2011, the American Diabetes Association presented a study that found a correlation between drinking diet soda and a wider waistline [HSC News]. The University of Texas Science Center San Antonio assessed 474 participants, measuring height, weight, waist circumferences and diet soda intake. In the next 10 years, researchers conducted three follow-up exams to see how participants' bodies evolved over the years. At the end of the study, the results showed that diet soda drinkers had a 70 percent greater waist circumference than those who abstained from artificially sweetened sodas. Guzzling two or more a day could give you a waistline 500 percent greater than those who steer clear of these types of sodas. It's possible that other eating habits caused these changes in body composition, but it's still a connection that may have you saying so long to diet drinks.

You May Get Drunk Faster

In an effort to save calories, it's tempting to choose diet soda for your slimmed down version of a rum and coke. However, this diet trick may prove to be a problem. According to a small 2006 study and more recent 2013 U.S. study, those who mixed vodka with a diet mixer were observed to have a have a higher blood alcohol concentration and breath alcohol concentrations – 18 percent higher -- than those drinkers who sipped on a full-calorie mixer [Alcoholism Clinical & Experimental Research]. Regular sugar can slow down the rate that your body absorbs alcohol into your bloodstream, leaving you less buzzed. And don't forget: When you're tipsy, you're less likely to pass up unhealthy snacks (hello late-night slice of pizza), leading to bigger diet troubles.