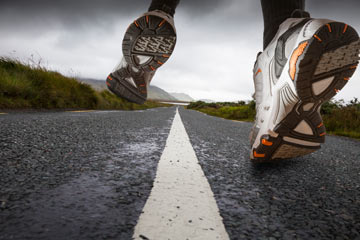 Want to reach your optimum efficiency? Pay proper attention to the role of good nutrition in your daily regimen.
iStockphoto/Thinkstock

When nearly 200 men stood on the start line of a transcontinental footrace dubbed "The Bunion Derby" in 1928, they did so with sub-par nutrition, equipment and support. Yet, amazingly, 55 men finished the 3,400-mile (5,472-kilometer) trek [source: Kastner].

In 1977, elite runner Dick Beardsley followed the advice he'd read in a running magazine and didn't eat for several days prior to a marathon. He subsisted on nothing but water, juice and Gatorade. He not only completed the marathon but came in seventh place [source: Latta].

And finally, in the cult classic novel "Once a Runner," the skinny focal character and elite miler Quenton Cassidy is described as a man who, "did not live on nuts and berries; if the furnace was hot enough, anything would burn, even Big Macs" [source: Parker].

It would be natural to take the anecdotal information gleaned from Cassidy, Beardsley and the Bunion Derby runners and surmise that nutrition need be nothing more than an afterthought for runners. After all, how much difference could it make anyway? Many average runners don't, in fact, think much about what they put into their bodies. But consider that Bunion Derby winner Andy Payne later claimed the race probably took a decade off his life [source: Kastner].

Beardsley hit the wall in his marathon, hallucinated throughout the final miles and collapsed at the finish. And while Quenton Cassidy could eat Big Macs and stay thin, he was running more than 100 miles (160.9 kilometers) per week in the fictional tale -- a fact that isn't mentioned by those who love to utter the "furnace" quote.

Nutrition is not an afterthought. It's an important component of success for newbies, middle-of-the-packers and Olympians. The most respected coaches in the world use one word to describe it: vital [source: English].

Click ahead to learn when good nutrition is vital -- before, during or after running.

Nutrition Before, During and After Running

Healthy nutrition is important for runners before, during and after a workout. It's important before a run because it provides you with the fuel to carry out the particular task.

Your muscles contain a limited amount of glycogen -- a type of glucose that is your body's most readily available source of energy. If you've been eating a regular diet consisting primarily of carbohydrates with a lesser amount of protein, your muscles and liver will contain about 2,000 calories that are ready to burn [source: Latta]. That's enough to get most people through about 20 miles of running. Keep in mind, however, that eating right before a run might not be the best plan.

Time your meals a couple hours before a workout. If you must eat closer to the time of your run, then make it a light meal -- perhaps a bagel, yogurt and a cup of fruit juice. Proteins and fats are particularly hard for your body to digest. It may take as long as five hours for them to move from your stomach, farther into the digestive system. For that reason, it's best to avoid heavy foods immediately before heading out to run [source: Run The Planet].

During a run, hydration is the core component of good nutrition. Without water your body can't work optimally. If you need fuel in the form of an energy bar, gel or other highly soluble form of carbohydrate, water will help facilitate digestion. Avoid caffeine, however. Caffeine dehydrates your body at a time when it needs just the opposite [source: Run The Planet]. Sugary items also contribute to intestinal distress. Always experiment with sports drinks, fruits (like bananas and oranges) and energy bars before using them in a race. It's very common for runners to miss their goal on race day by trying something new and discovering that their body doesn't react well to it.

Eating may not sound good following a tough workout, but replenishing your body is very important. Think of your body's cells as sponges. Those cells are more open to nourishment in the half-hour following a run than at any other time [source: Shea].

Ignoring that window means your body won't rebuild as fast as it otherwise could.

Foods that you might normally eat without incident can be highly upsetting to the stomach in the midst of a run. The human body redirects blood flow to the muscles that need it most, meaning digestion isn't a priority [source: Run The Planet].

If you have the discipline to maintain a workout regimen, then there's a good chance you're also, at least occasionally, strong-willed. You feel that you know your own body and its needs and wants. Perhaps your more mentally strong that the average person. All of those things are probably true, and yet ignoring the principles of good nutrition before, during and after exercise ultimately leads to unpleasant experiences.

Just as Dick Beardsley became hallucinogenic during his marathon, other runners have been incapacitated during important races by stomach upset, vomiting or simply lack of energy. The most-seasoned and highly trained athletes in the world can share stories of "hitting the wall" in a marathon. Since, as previously mentioned, the muscles and liver only hold about 2,000 calories, most runners will run out of fuel at the 20-mile mark if they haven't fueled-up periodically with water, energy drinks and/or energy gels. At that point, the race becomes a very difficult mind-over-matter battle. It's particularly difficult because the brain thrives on glycogen -- something you have barely any of at that point.

Other athletes may ignore the 30-minute window following a tough workout and find over time that their rate of improvement isn't matching their peers. That's why some coaches even factor the time it takes to eat a healthy meal or snack into the week's total training hours. It's that important [source: English].

An elite athlete or a weekend warrior may survive a grueling event without paying proper attention to the role of good nutrition, but they won't reach their optimum efficiency and they'll periodically find it difficult to enjoy the experience fully.