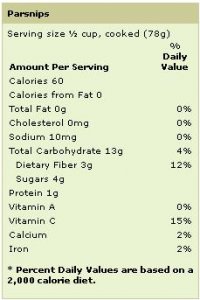 Parsnips look like a pale carrot and are actually a relative of the carrot, celeriac, and parsley root. Commonly found in Europe, this root vegetable arrived to the United States with the colonists. Popular in the 19th and early 20th centuries for its celery flavor and nutty fragrance, this vegetable was often used in recipes that called for caloric decadence.

Parsnips are available year round with a peak from fall into spring. They are often displayed with the parsley root, so be sure you know which is a parsnip. Parsley roots are typically sold with their feathery greens whereas parsnips are sold by the root.

Wash, peel, and trim parsnips as you would a carrot. If steaming, then the parsnips skins will slip off after cooking. If pureeing parsnips, then leave skins intact. 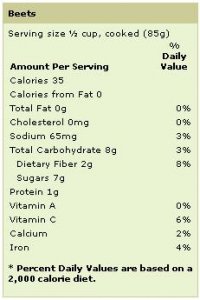 Beets used to be only found in salad bars in canned form, and on European menus, but with the culinary winds changing, this root is now commonly seen in stateside grocery stores everywhere. This root vegetable like its turnip cousin has two parts — the edible root and the edible green leaves.

There are too many varieties to list here, but with more than one type of beet to choose from, why not try one of each if you get the chance. This versatile vegetable can be eaten raw, baked, steamed, pickled, and served as a condiment or alongside soups and entrees.

Beets are available year-round because they thrive in more than 30 states with June through October being their peak season. These roots come in all shapes, sizes, and colors so try a variety to find your favorite.

Young beets, about an inch and a ½-inch diameter are fine textured, tender, and excellent in salads. Medium and large size beets are good for cooking; very large roots are too woody for eating regardless of cooking method. Which ever size of beets you choose, look for smooth, hard, uniformly round beets that are free of cuts and bruises.

It's best to store beets that have their tops chopped off in individual plastic bags in the coolest part of the refrigerator. These should last up to one week. The greens should be eaten as soon as possible.

Wash and scrub the beets before cooking. Beets peel best after cooking, so be sure to wear disposable gloves to minimize red stains on hands. 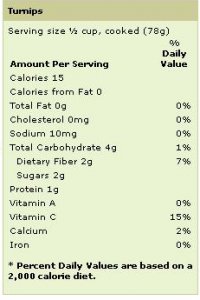 This root vegetable has been found all over Europe and Asia for centuries. A turnip looks larger than a radish and is a well known food source for both the root and greens. Turnips come in all shapes, sizes, and colors.

Turnips are available year round with a peak in the fall and winter months. Select smooth surfaced roots that are firm and heavy with some root hairs at the bottom. In general, the smaller the turnip, the sweeter the taste. Turnips keep well; cut the greens and bag them separately from the root placing them in the crisper section of the refrigerator for up to a week. Turnips can be peeled before cooking, eaten raw, or sliced, diced, or julienned. When cooking this delicate root, cook only to the just tender point; avoid overcooking as sweetness will diminish. 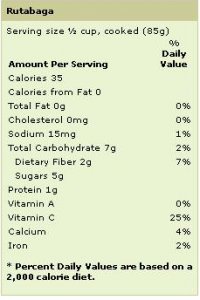 A cousin to the turnip, rutabagas are a cross between a cabbage and a turnip. Virtually unknown in the United States until the 19th century, this root gets its name from the Swedish word "rotabagge" meaning round root. People have avoided this root because it is a cruciferous vegetable that becomes more flavored and odorous when cooked.

Rutabagas are available year round with a peak in the fall and winter. These roots range from tan to violet in color and are much larger than turnips; choose smooth, heavy, and firm roots. Smaller rutabagas, 4" in diameter, tend to have sweeter flavor. This root stores for about 2 weeks in the refrigerator or at room temperature for a week. Rutabagas are usually covered in wax, so it's best to quarter the root, then peel the skin before cooking. 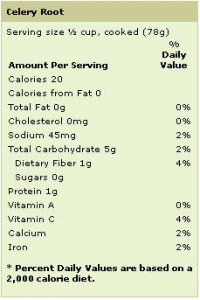 Part of the celery family, the celery root or celeriac, is routinely used in French cooking and is seen throughout Europe. It is solely grown for its root use and appeared in the United States beginning in the 19th century.

This root is bypassed by many because of it unusual appearance of crevices and rootlets. When cooked well, this root evokes celery and parsley flavors.

Celery roots are available year-round with a peak during November through April. Select roots that are the least knobby or ones that have the smoothest skin (for easier peeling). Medium roots tend to be smoother and harder and these roots can be sold with or with out the celery tops. If you do buy the roots with the tops, trim the stalks and save them for soups and stews. The roots should be wrapped in plastic, stored in the refrigerator, and used within a week. Celery roots must be scrubbed, trimmed at the top and bottom, quartered, and then peeled before eating. Be sure to discard any spongy parts. Avoid overcooking celery root as it will go quickly from firm to mushy. 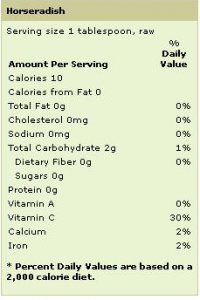 Horseradish is a member of the mustard family and is native to Eastern Europe, although it may have originated in Asia, Germany, or the Mediterranean area. The ancient Greeks used it, so did the Hebrews — it is one of the 5 bitter herbs of the Jewish Passover. The strong flavor of this root has an underlying sweetness and seems more like garlic than a spice.

Horseradish roots are available year round but are plentiful during the fall and early spring. Buy roots that are hard avoiding sprouting, greenish tinges, blemishes, and shriveling.

Store these roots in plastic bags and refrigerate up to a week or freeze grated root in an airtight container for several months. Scrub the root and peel the brown skin. Finely grate or food process the root. 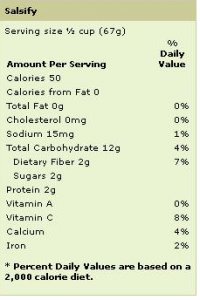 Salsify is called vegetable oyster because of its faint oyster-like flavor. This name is used interchangeably to describe two roots. White salsify is pale, thin, forked, has rootlets at the bottom, while black salsify (scorzonera) looks like a brown carrot and is much smoother and longer looking. Popular in Europe since the 16th century, this root has just begun to make its appearance in markets.

This root is available from fall to early spring. Select medium size roots that are smooth and firm. Larger roots are more fibrous and smaller roots have less meat. White salsify is sold in bunches with leaves still attached. Black salsify is usually sold without leaves and in plastic bags. Salsify will last 2 weeks wrapped in plastic and stored in the refrigerator. Prepare salsify by scrubbing with a brush, removing the skin, rootlets, and all dark spots. Trim the tops and bottoms and slice as you would a carrot or leave whole. Avoid overcooking this root as it will quickly turn into mush.