by Sarah Grace McCandless
Prev NEXT
6 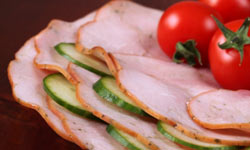 For a lighter sandwich, try leaving out the bread.
iStockphoto/Thinkstock

Create a heart-smart, on-the-go deli for your picnic by packing lean proteins such turkey and chicken, low-fat cheeses, whole grain bread, and healthy fixings such as lettuce, tomato, sprouts, and bell peppers. Another option is to ditch the bread entirely and use the protein as an outer layer to create carb-free roll-ups, which can be secured with a toothpick or two. Choose condiments wisely as well: Regular mayo packs a whopping 90 to 100 calories and 10 grams of fat per tablespoon, and it doesn't hold up well in heat -- not even the lighter varieties. Instead, try dressing sandwiches with healthier selections, such as mustard or salsa. Also, keep in mind that many pre-packaged deli meats can contain high amounts of preservatives and sodium, so read labels carefully before buying, and look for organic or lower sodium varieties. Many deli counters offer these healthier alternatives, which tend to be cheaper by the pound. However, the lack of preservatives also means a shorter shelf life, so don't purchase these proteins too far ahead of your outing.