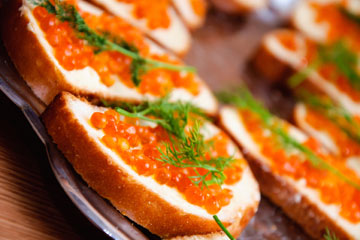 Is that real caviar or a version made from soy? We'll never tell.
©iStockphoto.com/Thinkstock

You're a purist. You grind your own coffee beans, dish steel-cut oats into your breakfast bowl and indulge in the occasional grass-fed steak on your dinner plate. And, when it comes to shellfish, you're no less discerning. Especially when it comes to cracking crab legs or dipping wild-caught lobster tail in clarified butter.

Keep that ideal in mind the next time you bite into a seafood sandwich from your favorite restaurant. Rather than dining on lump crabmeat, you may be consuming an imposter: surimi. Surimi, also known as imitation crabmeat, is the seafaring equivalent of breakfast sausage. Several types of mild white fish, such as Alaskan Pollock or Pacific whiting, are minced and then cooked with crab flavoring [source: Herring]. In the end, it's an amalgamation that's good, but entirely different, than its raw ingredients.

Although the idea of faux food may offend a foodie's sensibilities, surimi and other seafood substitutes aren't necessarily the equivalent of a school cafeteria's mystery meat. Instead, these handy alternatives allow people with shellfish allergies to avoid symptoms like hives, extreme itching and swelling, while still enjoying the (sea)foods they crave.

But what if you or your dinner guests can't tolerate seafood at all? Even the best shellfish substitutes still contain fish and may not be right for a thoughtfully prepared menu -- especially during holiday celebrations when you may not know whether one of your guests has a food allergy.

It's also possible that your guests prefer vegan options or simply want to steer clear of red meat. So how do you please everyone, while still serving delectable foods that are the center of holiday celebrations? The answer is simple: seafood substitutes. While the ingredients in fake seafood have likely never seen the sea, they often taste like the real thing. So, as the visions dancing in your head turn from sugarplums to tofu fish patties, put on your apron. All that stands between your holiday menu and a steady stream of rave reviews is a bit of ingenuity in the kitchen.

Before you start whipping up a few fish-less seafood recipes for your holiday celebrations, go on a fishing expedition -- fishing for answers, that is. First, you'll want to decipher what, exactly, comprises a seafood substitute. It won't contain seafood, and in many cases, it won't include meat, either. In fact, if you'd really like to get acquainted with the ingredients in seafood substitutes, you'll need to head for the land of legumes and vegetables. Meat-free recipes are a great place to start looking for seafood substitution inspiration. For example:

Seafood Substitutes: The Good and the Bad

Some seafood substitutes offer a healthy boost. Take cauliflower, for example. Although it can be soaked in crab-boil seasoning and served with cocktail sauce to mimic shrimp, you really can't go wrong if you overindulge. Cauliflower contains potassium, folic acid, fiber and vitamin C, and it's low-calorie, too [source: Stanton].

Other seafood substitutes, however, should be eaten sparingly. Soybeans, and their flavorful derivatives, are fillers often added to fish products to bolster serving sizes or act as a binder. You may encounter soy in recipes that contain seafood. Soy can be used as a seafood substitute, too, and is often a main ingredient in faux fish or shrimp concoctions.

While the U.S. Food and Drug Administration reports soy can lower cholesterol and reduce the risk of heart disease, eating a diet rich in soy could also pose a few health risks. Researchers who have studied soy-based diets in animals posit the effects could spell out trouble for humans. For example, ingesting large amounts of soy could delay development in children, cause early puberty onset in preteens or lower fertility rates in women.

What is considered a "large amount" of soy? Eating more than 25 grams (.88 ounces) of soy per day [source: Konkel]. In seafood substitute terms, that would be the equivalent of using 6 ounces (170.1 grams) of tempeh to make faux crab cakes or using about three-quarters of a cup of soy flour to whip up a substitute seafood casserole -- and eating all of it in one day [source: Soy Foods].

Perhaps the most pressing risk is in the processing of seafood substitutes. To create seafood substitutes, the food must first undergo extensive processing. For example, a package of vegetarian shrimp, squid or tuna is made primarily of soy protein, yam flour, taro powder and wheat gluten -- all of which are far from their natural, whole state [source: Litt]. The same goes for imitation crabmeat, which is made of minced fish and which also contains levels of sugar and salt that are more elevated than one would find in freshly harvested fish.

As with any category of foods, there's a give-and-take that comes with adding seafood substitutes to your diet at any time of year. During the holidays, however, we're all OK with splurging a little.

What is Vitamin C?
Carrots: Natural Weight-Loss Food
How much poop is in your drinking water?