Is honey healthier than sugar? 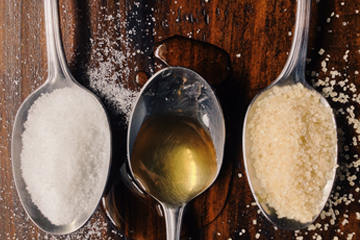 There are multiple reasons that honey may be better for you than sugar.
Jason Sanqui/Getty Images

George, a 65-year-old diabetic, accidentally nicked his skin one day while clipping his toenails. Wound healing can be a real problem for diabetics. Sure enough, within a few days, the small injury had morphed into an oozing ulcer that refused to heal. Until, that is, George slathered the sore with honey. It was a home remedy his grandmother had once demonstrated, and in a few weeks, George's toe looked as good as new.

Honey might be good for our outsides, but is it better for our insides than regular sugar? Honey and granulated white sugar both contain glucose and fructose. In white sugar, the glucose and fructose are chained together; in honey, fructose and glucose are separate. This may seem like a minor distinction, but it affects the way our bodies process them. The glucose/fructose chains in granulated sugar allow our bodies to convert it to energy quickly, which can lead to a spike in blood sugar. However, because the fructose remains separate in honey, our bodies take slightly longer to process it. This translates into a slower release into the bloodstream.

Calorie-for-calorie, there are differences between sugar and honey, too. One teaspoon of refined sugar has 16 calories, while an equal amount of honey has 22 calories. However, honey is also sweeter than refined sugar so it usually takes less honey to achieve the same level of sweetness. Honey also contains small amounts of vitamins, minerals and antioxidants — all of which are lessened by pasteurization and storage [source: Columbia University, Wang].

Compared to sugar, honey could have a positive impact on appetite and blood sugar. A study published in the "Journal of the American College of Nutrition" examined the effects of honey and sugar on the appetites of 14 healthy, average-weight women. Half the women ingested 450 calories of honey as part of their breakfasts, while the other group ingested the same amount of sugar. The women who relied on honey as a sweetener had delayed hunger and steadier blood sugar than those who ate sugar. So honey may be better for us than sugar, after all.