Browse the article Salt: Breaking Up Is Hard to Do 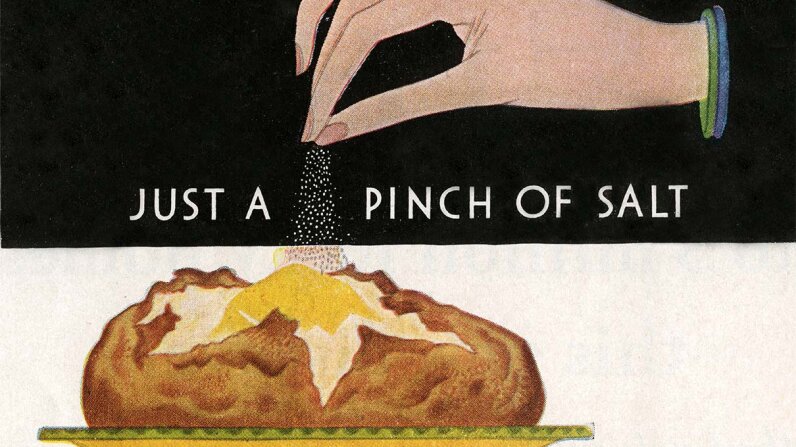 Sodium brings out the flavor of food and is a vital electrolyte necessary for life, but the average diet today is packed with excess salt from processed foods. Vintage screen print/GraphicaArtis/Getty Images

The word itself makes our salivary glands stand at attention and our taste buds burst to life. But what's in a word? In salt's case it's 40 percent sodium and 60 percent chloride: NaCl, common table salt, also known as halite, from the only family of rocks eaten by humans. Etymologically derived from Salus, the Roman goddess of health and well-being, would salt by any other name be more irresistibly delicious?

"We are hardwired to crave salt," says Sharon H. Bergquist, M.D., internal medicine, assistant professor of medicine at Emory University School of Medicine. "In ancestral times, the availability of this essential mineral was scarce. To motivate us to seek salt, our bodies became designed to get reward and pleasure from it."

From piquant pizzas and pasta sauces, saliferous soups, pungent meats and fizzy sodas, to popcorn, chips and nuts, we love our salty gnosh foods and beverages. The bad news is that these snacky processed foods, which make up the bulk of the average American diet, are packed with excess salt and it's shaking up our health.

As Bergquist explains, "The sodium in salt causes most of the damage in our organs. When faced with excess salt, our kidneys try to excrete as much as possible. Some sodium, however, accumulates. The body holds onto water to dilute the sodium. This increases the volume of blood and pressure on blood vessels. The resulting high blood pressure can damage many organs, including the heart, kidneys and brain."

Sodium is a vital electrolyte. Electrolytes are minerals dissolved in the body's fluids to help balance our cells and regulate bodily functions like hydration, signals to and from the brain, blood pressure and the proper functioning of our nerves and muscles — especially our most important and hardest-working muscle, the heart. Too much sodium can lead to hypertension, or high blood pressure. Not enough sodium can lead to hyponatremia, which can result in shock.

Which Is Worse: Too Much or Too Little?

Asked which is more of a health risk, a diet too low or too high in sodium, Bergquist replies, "While a few studies have raised concern that a very low sodium diet may be harmful in certain sick groups of people, the bigger problem is that we are consuming too much salt. The current average consumption of 3,400 mg a day, roughly 1.5 teaspoons, raises blood pressure, which can increase the risk of heart attacks and stroke."

So just how much salt is necessary to survive? Is there a minimum and a maximum amount?

"We can't live without salt," says Bergquist. "We need a minimum amount for our nerves and muscles to function, and to maintain our fluid balance. There isn't a clear minimum, but it is likely around 200 mg, which is many-fold below the average daily intake."

The Centers for Disease Control and Prevention (CDC) suggests consuming no more than 2,300 milligrams (mg) of sodium per day. And the American Heart Association (AHA) recommends an ideal limit of no more than 1,500 mg per day with a bare minimum of 200 mg to 500 mg daily for the average adult. However, Bergquist suggests that children under 4 years old and people over age 51 should reduce their sodium intake to 1,500 mg a day.

Concerning a safe daily parameter, Bergquist admits there's a lot of debate about what's considered a healthy range of salt consumption. "The FDA, AHA and Dietary Guidelines for Americans recommend no more than 2,300 mg a day. The Institute of Medicine, on the other hand, doesn't feel that there is enough evidence that topping out salt intake below 2,300 mg a day either harms or improves cardiovascular outcomes and all-cause mortality."

"Seventy-five to eighty percent of the salt we eat comes from processed food," says Bergquist. "So reducing or avoiding processed and fast food is a good place to start for lowering sodium intake."

Given these numbers, people with hypertension will be heartened to know that it is possible to lower blood pressure by consuming less salt.

To that end, Bergquist reveals that results from the Dietary Approaches to Stop Hypertension (DASH) trials were foundational in linking lower sodium intake with lower blood pressure. The first part of the DASH trial found that a diet emphasizing fruits, vegetables, low-fat dairy foods and limited red meat, saturated fats and sweets (the DASH diet) lowered blood pressure compared to the standard American diet. The second trial looked at three levels of sodium intake – high, medium or low – in people who followed the DASH diet or the standard American diet. It concluded that the less sodium a person consumes, the lower their blood pressure.

So kiss your salty fantasies of scattered, smothered and covered hash browns slathered in ketchup goodbye already. The doctor recommends that we eat more whole foods like fruits, vegetables, beans, lentils, nuts and seeds: "Not only are they naturally low in sodium, but they are high in potassium, which opposes the effect of sodium by relaxing blood vessels and lowering blood pressure," affirms Bergquist.

As for runners and others who work up a healthy sweat exercising, Bergquist advises, "It's better to replace lost sodium with electrolyte-rich sports drinks and food rather than salt pills to avoid getting excess salt."

On the eve of (yep, it's a real thing) World Salt Awareness Week, which takes place March 12-18, 2018, Bergquist reminds us that, "Regardless of how we respond to salt, we can improve our health by eating whole foods and avoiding processed foods, many of which contain whopping amounts of salt."

It'll take a lot of self-discipline and likely a period of moody withdrawal before we're able to give that briny siren sodium the final shake, but for the sake of our health we owe it to ourselves to try.

NOW THAT'S TROUBLING
When Hurricane Maria walloped Puerto Rico in September 2017, knocking out the electrical grid, it incapacitated one of America's key manufacturers of intravenous saline fluid bags. Unable to do without, yet unable to pay up to a 600 percent markup from other sources, hospitals across the country faced critical shortages of IV bags.