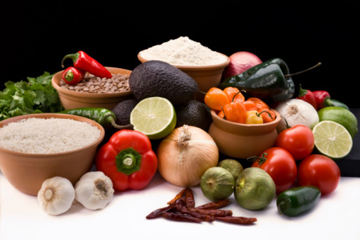 Whole-foods cooking takes you back to the basics.
©iStockphoto.com/Thinkstock

Mexican cuisine is one of my favorites, both to enjoy in restaurants and to cook at home. But depending on what you eat, it may not always be the healthiest. I'm not just talking about things like fat and calories but also in terms of additives, preservatives and processing.

For followers of the whole food diet (or movement, or way of eating, if you consider "diet" a dirty word), it might initially seem difficult to cook Mexican food. Especially for the holidays, when foods can often be more time-consuming to prepare and shortcuts make things go quicker and easier. But that might not be your priority. If you're not familiar with whole foods, let's start there.

By "whole foods," I'm not talking about the upscale supermarket chain. There isn't one strict definition, but whole foods simply means trying to eat foods as much in their natural state as possible -- the way people used to eat. It doesn't necessarily mean eating organic, raw or vegetarian, although all of these ways of eating can be incorporated if you choose. Broadly speaking, by eating whole foods you're eating unprocessed, unrefined, fresh, local and seasonal ingredients as much as possible. Many whole foods proponents strive to avoid high-fructose corn syrup and GMOs (genetically modified organisms) along with artificial ingredients. Cooking the whole-foods way takes longer, but you know exactly what's going into everything you eat.

Now that you have an idea of what whole foods means, let's get back to thinking about Mexican food. If you cook like many people cook Mexican -- an Americanized version -- you could make it almost entirely out of boxes and cans (including the meat). Some people can't conceive of making tacos at home without a packet of seasoning, for example. But isn't that seasoning just herbs and spices? Nope. In addition to chili powder, salt and other spices, many packets contain monosodium glutamate (MSG) and butylated hydroxytolune (BHT), both common food additives that are supposed to enhance and protect flavor.

Next, we'll look at how you can stock your pantry with whole food ingredients to make some classic Mexican holiday foods.

If you're feeling overwhelmed by the idea of stocking your pantry with whole foods-friendly items to cook Mexican, don't be. You can go as far as you want to. Some followers plant gardens and only buy grass-feed beef from local farmers. You can shop at your local grocery store and still follow the main idea of the thing, though. You won't be buying pre-made seasoning mixes or sauces, so you'll need the ingredients to make them yourself. Think fresh when available, look for organic and focus on finding them as whole as possible.

Common herbs and spices include garlic, cayenne powder, thyme, cilantro, cumin and oregano. Organic versions of many things are available. You should be able to find cilantro fresh, but it's also easy to grow at home. Fresh garlic is preferable -- even jarred, peeled garlic might contain salt or preservatives. Mexican oregano is available in the international aisle; it's stronger than the Mediterranean kind. Then, of course, there are the chilies. If you have the means to grow your own jalapeños, poblanos and serranos, that's ideal. But if not, hopefully you can find them fresh. Many of these chilies are also used dried, or smoked and dried. Anchos, for example, are dried poblanos. Consider experimenting with drying your own.

Beans, like pintos, are used often in Mexican cooking. If you do buy canned, look for the no--salt-added kind, but ideally, you'd use dried beans. They take longer to cook, but you can control the seasoning and texture. To be the most whole-foods friendly, get brown rice instead of white. No mixes, no instant rice. As in many cuisines, baking is important around Mexican holidays. Some special ingredients include pure vanilla extract (imitation will have artificial colors and flavors); Mexican chocolate, which is made with cinnamon; and piloncillo, pure sugar cane sold in cones. Some of these ingredients may be difficult to find locally. Then you have to make a decision: Would you rather be as traditional as possible and order them online, or stick to the more whole-foods mentality of going local? If you choose the latter, there are always substitutions. 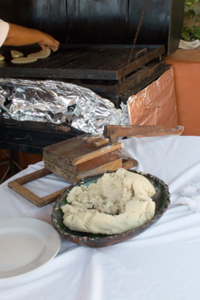 It'll take some work, but imagine how amazing those hand-made tortillas will taste!
©iStockphoto.com/Thinkstock

While Mexican holiday foods incorporate different kinds of breads, when you think of Mexican food, corn-based ones like tortillas certainly come to mind. But store-bought tortillas often include a lot of preservatives; to go whole foods, you'll need to make your own. If you're up to the challenge, you can start at the very beginning with dried corn and slaked lime to make nixtamal, or slaked corn.

It's a big process, but in the end, you'll have flour for your own tortillas, tamales or hominy and can make them however you want. But to make tortillas or tamales, you can also just buy the masa -- fresh dough made from dried, cooked corn. This is only available if you live in an area with a big Latino population, however. More likely, you'll find masa harina, flour made from the dried, ground dough. Just make sure it's not the mix, which might include lard.

When choosing produce, always try to go with local and in-season. Of course, that's not always possible. Sometimes, cooking whole foods means choosing your menus based on what's available, instead of deciding what to make and then trying to find it. Fresh ingredients like tomatoes and tomatillos are good examples of this. Tomatoes aren't always so great in winter, and tomatillos may be tough to find any time of year, so canned is often your only option. Once again, read the labels so that you're not getting salt or anything else. Hopefully, you can also find Mexican dairy products such as queso fresco (fresh cheese), which is much more authentic than cheddar or Monterrey jack in recipes.

And finally, let's talk meat. Avoid anything pre-seasoned or pre-cooked. Those tempting packages of inexpensive beef labeled "for fajitas"? They're a bad idea because you don't really know what you're getting. Whole cuts are preferable. If you want something ground, find a butcher who will grind a cut of beef, such as a chuck roast. When you buy chicken, make sure you're not getting any that's "enhanced" with broth or saltwater.

Finally, let's check out how you can make whole foods-friendly versions of some of the most popular Mexican holiday foods.

It's not possible to cover all Mexican holiday foods, but a few of them are true classics. The number one dish is tamales, probably because they're very time-consuming to make (like many special holiday dishes). Tamales are steamed masa, or corn dough, formed around a filling (typically meat or cheese) and wrapped in either a corn husk or a banana leaf, depending on the region where they're made.

There are plenty of shortcuts to be found, but they won't be whole foods. Masa harina should just have corn and lime as its ingredients. Most recipes will call for lard, but they may also use butter or oil. One unique way to make a healthier but still whole-foods version is to use cooked, mashed plantains for the dough. For meat fillings, find recipes that call for cooking from whole cuts instead of using something like rotisserie chicken from a deli. You can roast or boil a whole chicken and then make broth, which many recipes will require. The same goes for beef fillings. Dried corn husks are available packaged, but you could also save corn husks and dry them yourself. It's a lot of work no matter what, which is why tamales are usually made by families in huge batches.

Now let's look at a type of bread that doesn't include corn: Rosca de Reyes, or Three Kings Bread, baked specifically for the Christmas holidays with a Jesus figurine inside. Whoever gets the figurine is supposed to be in charge of making the tamales for the next holiday. While the dough itself is a pretty traditional yeast version, one of the special aspects is the candied fruit. Around the holidays, it's usually easy to find candied cherries, lemon, orange and other fruits. But they contain high-fructose corn syrup and preservatives, so you can actually candy your own fruits. They're essentially cooked in a sugar syrup and then dehydrated. 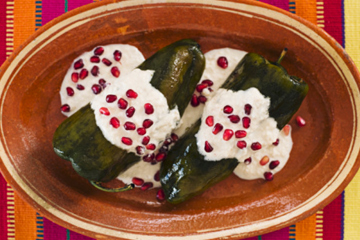 Chiles en nogada (chili peppers in a walnut sauce, loosely translated) is a delicious, colorful Mexican dish that you can give the whole-foods treatment.
Jupiterimages/FoodPix/Getty Images

Chiles en nogada incorporates the colors of the Mexican flag -- red, white and green -- and that makes it a popular dish for Mexican Independence Day (contrary to popular belief, this is not Cinco de Mayo). It starts with a poblano chili. This is filled with picadillo, a savory-sweet mixture that includes ground beef, raisins and nuts, then topped with a white, creamy walnut sauce and sprinkled with pomegranate seeds.

Fresh poblanos are more readily available in regular grocery stores, and the only other ingredient that might trip you up is bisnaga, or candied cactus. Dried apricots (unsulphured only) are a decent substitute. Ideally, find your nuts whole, then crack and chop them yourself for the freshest taste. The sauce often includes sour cream -- did you know you can easily make your own using buttermilk and cream? The shelf version often contains stabilizers like guar gum.

Lots of traditional Mexican beverages drunk around the holidays are perfect for the whole-foods treatment. Atole is one of the most popular during colder-weather holidays like the Christmas season or during Dia de los Muertos (Day of the Dead) because it's rich and warming. When made with chocolate, it's called champurrado. As with other hot drinks, you can find mixes, but of course you'll want to make them from scratch. Atoles start with masa -- either fresh or as masa harina. It's dissolved in milk, with piloncillo (or brown sugar as a substitute) and either chocolate or crushed fruit added.

These are just a couple of Mexican holiday recipes to get you rolling with the idea of combining Mexican cuisine and whole-foods cooking. It's more work, but the results are delicious.