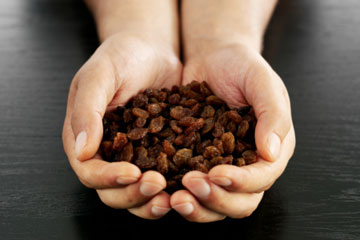 Raisins have been around for a long time. They're mentioned in the Old Testament of the Bible and were consumed as early as 2000 B.C. in ancient Persia and Egypt. Today, the largest raisin producer is California's San Joaquin valley, where raisins became a major "crop" in 1873, when a drought destroyed much of the annual grape harvest. Raisins are sweet, compact and quite healthy.

Raisins are dried grapes, so they have all the nutrients of a grape, with twice the sweetness. They're convenient, they don't go bad quickly (because they have little moisture), and a handful is a quick source of usable energy and vital vitamins.

Raisins are one of the few fruits with significant levels of iron, which helps the body make hemoglobin, the blood component that delivers oxygen to organs and tissues. This improves overall circulation and tissue health. Raisins also contain phenols, which are antioxidants that prevent oxygen-based cell damage. Antioxidants found in raisins may also prevent some kinds of cancer [source: Today's Dietician].

Raisins contain the mineral boron, which is important for bone health and can help prevent osteoporosis, especially in women. Boron converts the hormone estrogen and vitamin D into chemicals the body uses to strengthen bones.

One ophthalmology study suggests that eating three or more servings of fruit each day can lower the risk of macular degeneration in older adults. In other words, raisins may slow down vision loss.

Because raisins are dried fruit, they don't contain water, and it's the water that makes off-the-vine fruit so filling. Even though raisins might not fill you up, a small amount of raisins can be surprisingly high in calories and carbohydrates. A quarter of a cup by volume (loosely packed) of raisins has about the same amount of calories and carbohydrates as two-and-a-half small apples. So if you're watching your sugar intake, measure out your raisins.

One other negative to consider is that raisins are treated with sulfur dioxide and sulfites during the packing process to prevent discoloration and extend shelf life. A small percentage of people are allergic to sulfites. If you're one of those people, purchase organically grown and packaged raisins that don't contain this additive. Also, raisins are a highly inflammatory food, and over-consumption can lead to joint swelling.

Raisins are sweet and add an interesting texture to savory dishes. Try tossing a few into a salad or a rice or couscous dish, or add them to cereal or yogurt. And, of course, you can eat them by the handful.

Raisins are available virtually everywhere and can be purchased in large boxes, portable snack packs or in bulk. And unlike fresh fruit, you don't have to eat them immediately. To keep raisins extra fresh, store them in a sealed glass container, where they'll last for up to six months.