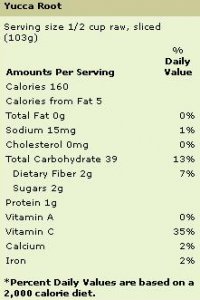 Root vegetables are a commonly neglected bunch, but have recently taken some spotlight with increased emergence of international cuisine. Each root has its own unique taste and nutritional value, so be daring and expand your taste buds! This month's feature includes: Cassava (yucca root), Jicama, Sunchoke, Taro root, and Water chestnut.

Yucca (also known as manioc or cassava), is a white, starchy tropical vegetable that widely grown and consumed in Africa, Asia, Latin America, and the Caribbean. In many countries, yucca is a dietary staple usually eaten boiled, steamed, and in flour form as thickeners or additional ingredients for noodles, cakes, and pastries.

Yucca root has made a home growing in Florida since the late 1800s. Cassava is a bushy perennial that can grow as tall as 8 feet. The white interior of yucca is firmer than potatoes and has high starch content. Fresh yucca has thick, dark brown skin that resembles a tree's bark. Fresh yucca is available year round. Look for firm blemish free tubers. Store whole yucca as you would potatoes, in a cool, dark, dry place for up to one week. Peeled yucca covered with water and refrigerated or wrapped tightly and frozen for several months.

Yucca can easily be substituted for potatoes in soups and stews and it contains a high amount of vitamin C and carbohydrates. It is also a good source of dietary fiber and contains approximately 120 calories per 1 cup serving. 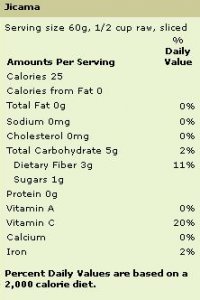 Jicama is a relative of the potato family. It is a popular dietary staple in Latin America and widely grown in Mexico and Central America. There are many names for Jicama including: the Mexican potato, Mexican yam bean, ahipa, saa got, Chinese turnip, lo bok, and the Chinese potato.

Jicama looks similar to a turnip or a large radish, and it can be used as an alternative to the water chestnut. Its skin is thin and can be gray, tan, or brown in color. Additionally, it has a short root and contains white flesh. The skin is typically peeled before eating it raw. Raw jicama tastes similar to a pear or apple. It also does not discolor when exposed to the open air for awhile. Because of this, raw jicama is often used as an accompaniment to raw vegetable platters. When jicama is used in cooking it tends to take on the flavors of the ingredients that it is being combined with. Therefore, jicama is a nice complement to various stir-fry dishes because it blends well with many vegetables and seasonings.

Jicama is a very versatile vegetable that contains a high amount of vitamin C, is low in sodium, and has no fat. One adult serving of jicama, which is equal to approximately 1 cup of cubed jicama or 120 grams, also contains only 45 calories.

Jicama is available year-round. When purchasing jicama, select tubers that are firm and have dry roots. Make sure that the jicama has an unblemished skin and that is not bruised. Once purchased, store jicama for up to two weeks in a plastic bag in your refrigerator. 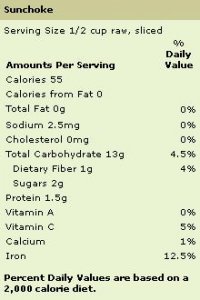 A relative of the sunflower, this vegetable is native to America, not Jerusalem, and has no botanical relation to artichokes. In fact, these tubers are actually a member of the Sunflower family. The white flesh is nutty, sweet and crunchy like chestnuts when raw. Baked in their skins, they become more like potatoes with a mild taste of artichoke hearts.

The Jerusalem artichoke is widely grown in gardens in Texas and is harvested in the fall for highest quality. Widely available in supermarkets, its peak period is September through January, but often continues through the early spring.

Select firm sunchokes that are firm and free from mold and wrinkles. Sunchokes vary in color where their shades range from dark brown to light brown in color, similar to ginger.

These tubers need be refrigerated, unwashed, in a plastic bag for up to 1 week for successful storage.

The taro root, as with other tubers is recognized by other names. This tuber is also known as dasheen, eddo and kalo in many areas of the world including West Africa, Asia, Central America, South America and the Caribbean and Polynesian islands. This root is most well-known as the ingredient of the Hawaiian dish "poi," or mashed taro root.

Taro root is a starchy vegetable that is commonly used in place of a potato. Its hairy outer coating on its surface is similar to a coconut. The hairy outer layer is always removed with caution since skin irritation can arise caused by the juices secreted by the taro root. It is recommended to use protective rubber gloves when handling this tuber. Taro root is toxic in its raw form so always cook it before eating.

These tubers take on a nut-like flavor when cooked. Frying, baking, roasting, boiling, or steaming them as an accompaniment to meat dishes are all common uses. Soups and stews are other dishes that taro root suits well.

Select tubers that are firm, hairy, with no wrinkling. Store the roots for up to one week in a cool and dry location, making sure that the roots do not dry out. 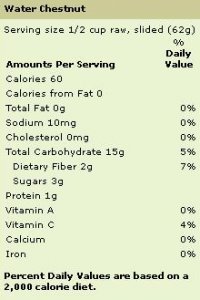 The water chestnut, resembles a chestnut in color and shape, is also known as the Chinese water caltrop. This tuber is commonly associated with Chinese cooking, but is finding its way into other ethnic meals.

Hailing from Southeast Asia, water chestnuts are actually roots of an aquatic plant that grows in freshwater ponds, marshes, lakes, and in slow-moving rivers and streams. These roots are commonly grown in Japan, Taiwan, China, Thailand, and sometimes in Australia. Water chestnut harvesting is laborious, making them somewhat expensive to purchase. Processed and canned water chestnuts widely found in most supermarkets. However, fresh water chestnuts, are more difficult to find, but are becoming more available.

If you find fresh water chestnuts, select those that are firm with no signs of wrinkling. These will need to be peeled prior to eating and cooking. Stored fresh tubers need to be wrapped tightly in a plastic bag for up to one week.

Canned, unopened water chestnuts will store indefinitely. Once opened, canned tubers will keep up to one week in a bowl of water. Be sure to change the water daily for the "freshest" product.