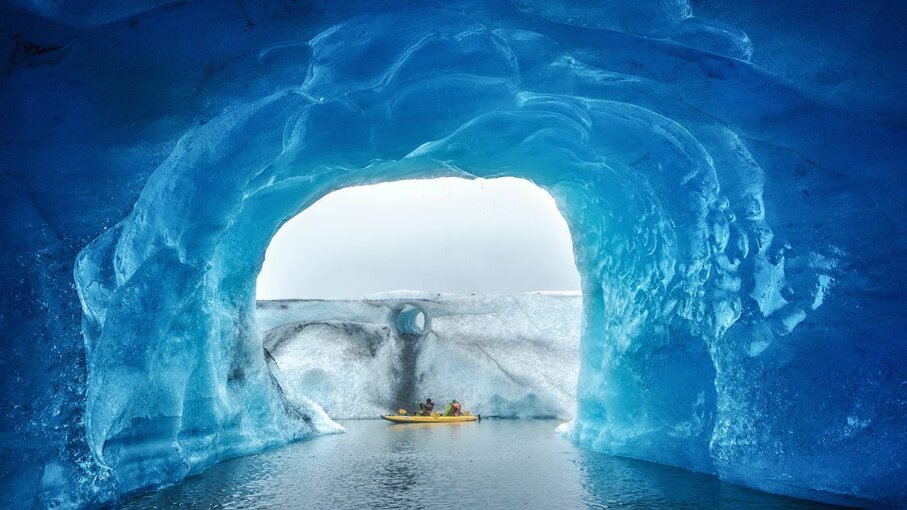 People kayak past a cave inside Valdez Glacier in Alaska. Piriya Wongkongkathep/Moment/Getty Images

Are you the kind of person who thinks mountaineering is a yawn and caving a ho-hum way to spend a Tuesday? Perhaps you should combine the two, and add melting, shifting loads of slippery ice to the adventure. Is that dangerous enough for you?

Welcome to the world of glacier caves, and the brave souls who explore them. These formations are sometimes mistaken for ice caves, which are simply rock caves covered in ice. But glacier caves actually form within the ice of a glacier, which makes them look like something out of a fantasy novel: Shining sunlight reflects blue-green off the smooth ripples of ice near the moulin, or vertical opening, of the cave. They form when meltwater runs through the ice, carving out a hollow space.

There are glacier cave tours for amateurs, but some teams exploring them aren't just there for fun; they bring with them a large collection of equipment and instruments to study the caves. The expeditions are difficult, so few groups have the skills to complete them. Glacier Cave Explorers is an Oregon chapter of the National Speleological Society, a nonprofit organization focused on the study, protection and promotion of caves and exploration. The scientists, ice climbers, doctors, photographers and other expert volunteers that make up their team collect data that they provide to climatologists, glaciologists and institutions like the National Park Service.

"Our primary work is to record what we find and understand the complexity that makes up a cave deep inside a glacier," says Brent McGregor, co-founder of Glacier Cave Explorers, in an email. "We divide into teams when entering the caves, each with a different job."

There's a team that focuses on data collection, like humidity and geologic samples, while another team surveys the caves. A photo and video team records changes in the glacier. "Photo documentation is valuable to record the changes occurring in the caves, which can be great," says McGregor, whose team has explored caves in the Sandy Glacier in Oregon, including Snow Dragon. "The importance is repeating the photos each year to show a 5-year 'time-lapse.' In the case of Snow Dragon Cave, a once magnificent cave is gone, completely melted away. Photos, surveys and collections are all we have left."

Because they record these changes, the Glacier Cave Explorers can see how the environment affects the caves. "Glacier Cave Explorers' mission is not to prove global warming or the effect humans have on the climate," says McGregor. "We are presenting our findings from a very unique perspective of what is happening beneath the ice, rather than traditional surface studies."

What they find is fascinating. The explorers gather info on microbes living in the environment, which can be helpful for astrobiologists. Studying glacier caves is also a unique way to track climate change, as the layers of ice and their movement reveal whether a glacier has grown or receded. With this data, scientists can predict and plan for the impact of glacial melt on the watershed.

But the enormous size of these caves, which grow when warm summer air blows through, could be a sign of thinning ice and decaying glaciers. Glaciers that have melted inordinately due to global warming have contributed to severe floods, rising sea levels and power shortages. As glaciers disappear and their pressure on Earth's crust fluctuates, more natural disasters, like earthquakes and tropical cyclones, could occur.

Glacier cave explorations can also keep outdoor enthusiasts safe. Some curious hikers and climbers might not be aware of how dangerous glaciers are. Maps of these geologic features, which explorers help develop, are invaluable tools in rescue efforts, should a caver become lost or trapped. The team's research could even help forecast potential natural catastrophes. But the bottom line?

"Most glacier caves require mountaineering and caving skills to explore," says McGregor. "They are dangerous dynamic environments to enter. The person that is not trained with the necessary skills should not explore inside glacier caves."

Now That's Interesting
The Crater Glacier on Mount St. Helens is a "growing" glacier cave. "The Crater Glacier is protected by the crater wall from the sun which has kept the melt process minimal," says McGregor. That's quite different from the global trend for ice packs and glaciers, which are rapidly losing ice at what McGregor says is "an alarming rate."