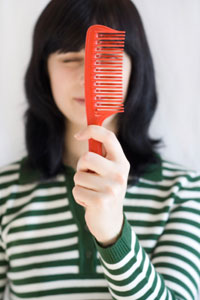 Are you heading for a haircare disaster?
Hemera/Thinkstock

It's never a good sign when the hairdresser panics. That's what happened to Barbara Cabrera-Avila, 38, when she returned to the salon about six weeks after having her hair straightened a couple of years ago. The cause for alarm: several bald spots in the back of her head.

The Adelphi, Md., resident began having her curls straightened at the age of six so her hair would be easier to comb and style. She says over-processed hair likely played a role in her hair loss, and stress could have been a factor. What's certain is that three dermatologists advised her to take a break from hair straighteners, also known as relaxers.

Barbara says giving up the straight hair she had grown comfortable with wasn't easy. After all, people's personal preferences about how they want to look tie into self-esteem — a fact that makes for good sales in the hair business.

In addition to paying for trims and cuts to achieve a certain look, consumers spend millions of dollars each year to get hair that's different from what nature intended — whether it's to tame tight curls, give flat hair a boost, or get rid of the gray.

According to the Food and Drug Administration's Office of Cosmetics and Colors, hair straighteners and hair dyes are among its top consumer complaint areas. Complaints range from hair breakage to symptoms warranting an emergency room visit.

Reporting such complaints is voluntary, and the reported problem is often due to incorrect use of a product rather than the product itself. The FDA encourages consumers to understand the risks that come with using hair chemicals, and to take a proactive approach in ensuring their proper use.

The agency doesn't have authority under the Federal Food, Drug, and Cosmetic Act to require premarket approval for cosmetics, but it can take action when safety issues surface.

When the Product Is the Problem

When consumers notify the FDA of problems with cosmetics, the agency evaluates evidence on a case-by-case basis and determines if follow-up is needed, says Allen Halper, an FDA consumer safety officer.The FDA looks for patterns of complaints or unusual or severe reactions. The agency may conduct an investigation, and if the evidence supports regulatory action, the FDA may request removal of a cosmetic from the market.

After receiving complaints about these products in November and December of 1994, the FDA warned the public against using them. Consumers complained of hair loss, scalp irritation, and discolored hair.

In December 1994, the World Rio Corp., Inc. of Los Angeles, Calif., announced that it stopped sales and shipments of the product. But reports indicated that the company continued to take orders, and the California Department of Health also stepped in to stop sales.

In January of 1995, the U.S. Attorney's Office in Los Angeles filed a seizure action against these products on behalf of the FDA. By then, the agency had received more than 3,000 complaints about the Rio products.

Although most relaxers are alkaline, this product was formulated to be acidic. In the resulting consent decree of condemnation and permanent injunction, the FDA alleged that the products were potentially harmful or injurious when used as intended, that they were more acidic than declared in the labeling, and that the labeling described the products as "chemical free" when "allegedly they contained ingredients commonly understood to be 'chemicals.'"

FDA has received complaints about scalp irritation and hair breakage related to both lye and "no lye" relaxers. Some consumers falsely assume that compared to lye relaxers, "no lye" relaxers take all the worry out of straightening.

"People may think because it says 'no lye' that it's not caustic," says FDA biologist Lark Lambert. But both types of relaxers contain ingredients that work by breaking chemical bonds of the hair, and both can burn the scalp if used incorrectly. Lye relaxers contain sodium hydroxide as the active ingredient. With "no lye" relaxers, calcium hydroxide and guanidine carbonate are mixed to produce guanidine hydroxide.

Research has shown that this combination in "no lye" relaxers results in less scalp irritation than lye relaxers, but the same safety rules apply for both. They should be used properly, left on no longer than the prescribed time, carefully washed out with neutralizing shampoo, and followed up with regular conditioning.

For those who opt to straighten their own hair, it's wise to enlist help simply because not being able to see and reach the top and back of the head makes proper application of the chemical and thorough rinsing more of a challenge.

Some stylists recommend applying a layer of petroleum jelly on the scalp before applying a relaxer because it creates a protective barrier between the chemical and the skin. Scratching, brushing, and combing can make the scalp more susceptible to chemical damage and should be avoided right before using a relaxer.

Parents should be especially cautious when applying chemicals to children's hair and should keep relaxers out of children's reach. There have been reports of small children ingesting straightening chemicals and suffering injuries that include burns to the face, tongue, and esophagus.

How often to relax hair is a personal decision. According to Pearl Freier, an instructor at the International Academy of Hair Design in South Daytona, Fla., relaxing at intervals of six to eight weeks is common, and the frequency depends on the rate of a person's hair growth.

Leslie F. Safer, M.D., a dermatologist in Albany, Ga., who has treated women with scalp irritation from relaxers, says straightening every six weeks is too frequent, in his opinion. Relaxers can cause hair breakage in the long term, he says, and blow drying and curling can do more damage.

Consumers should be aware that applying more than one type of chemical treatment, such as coloring hair one week and then relaxing it the next, can increase the risk of hair damage. "The only color we recommend for relaxed hair is semi-permanent because it has no ammonia and less peroxide," compared with permanent color, Freier says.

As with hair relaxers, some consumers have reported hair loss, burning, redness, and irritation from hair dyes. Allergic reactions to dyes include itching, swelling of the face, and even difficulty breathing.Coal tar hair dye ingredients are known to cause allergic reactions in some people, FDA's Lambert says. Synthetic organic chemicals, including hair dyes and other color additives, were originally manufactured from coal tar, but today manufacturers primarily use materials derived from petroleum. The use of the term "coal tar" continues because historically that language has been incorporated into the law and regulations.

The law does not require that coal tar hair dyes be approved by the FDA, as is required for other uses of color additives.

In addition, the law does not allow the FDA to take action against coal tar hair dyes that are shown to be harmful, if the product is labeled with the prescribed caution statement indicating that the product may cause irritation in certain individuals, that a patch test for skin sensitivity should be done, and that the product must not be used for dyeing the eyelashes or eyebrows.

The patch test involves putting a dab of hair dye behind the ear or inside the elbow, leaving it there for two days, and looking for itching, burning, redness, or other reactions.

"The problem is that people can become sensitized — that is, develop an allergy — to these ingredients," Lambert says.

And what about ending up with something other than the exact shade of strawberry blonde on the shelf? "Don't think the color on the box is the color you'll get," says Freier, the cosmetology instructor. "There are so many variables, like what chemicals are already in your hair and what your natural color is, that go into how your hair will turn out."

When using all hair chemicals, it's critical to keep them away from children to prevent ingestion and other accidents, and to follow product directions carefully. It sounds basic, but some people don't do it, says FDA's Halper. "If it says leave on hair for five minutes, seven minutes doesn't make it better," he says. "In fact, it could do damage."

Adapted from the January-February, 2001 issue of FDA Consumer.

How do you decide which toothbrush to use?
Dental Crowns
What are the consequences of delaying a root canal?