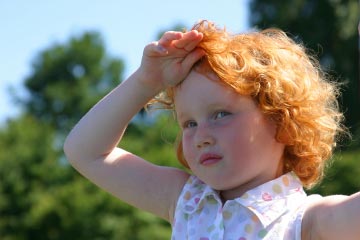 Without the ability to sweat, the human body has a difficult time regulating its temperature. See more skin problem pictures.
© iStockphoto.com/Fotosmurf03

You're always cool as a cucumber, despite excessive summer heat, an exercise class or new social situations. But just because you're not sweating doesn't mean you're truly composed. You could have anhidrosis, the inability to perspire. Odds are you may not notice the signs of anhidrosis -- an absence of telltale underarm wetness, for instance -- until it reaches a potentially dangerous level.

So why is sweating so important? It helps your body regulate its temperature. More precisely, it helps your body cool off as your internal temperature rises. One of the repercussions of not being able to sweat is that you may get heat stroke or, in the case of a fever, develop a temperature so high it causes a febrile seizure. Either scenario could prove deadly. Children are especially vulnerable if unable to sweat; they have are less able to regulate internal temperatures because of their size, so being able to perspire may mean the difference between health and death.

When you don't sweat, you may have to deal with other symptoms, too. Prolonged muscle cramps, dizziness and a perpetual feeling of being too hot become daily challenges -- especially for people who don't perspire over most of their bodies. But that's not always the case: Anhidrosis can occur in a single area or in scattered patches. When this happens, other body areas that do sweat will try to make up the difference. This may be bothersome, but it's not usually dangerous. However, the prevalence of mild symptoms makes it difficult to recognize the condition until something goes really wrong, like getting overheated. That's one reason no one really knows how many people are affected; sometimes the symptoms go unnoticed -- even by physicians.

With anhidrosis, it's not just that the sweat doesn't leave the body; it isn't produced in the first place. Sweat glands stop working for a number of reasons, ranging from nerve damage to skin trauma. The condition also may be inherited. Either a child is born with very few sweat glands, a malady known as hypohidrotic ectodermal dysplasia, or has a genetic disorder that makes sweat glands malfunction.

Anhidrosis can't be prevented, unless it's the temporary kind. Sometimes anhidrosis develops as a side effect of medications, including those used to treat bladder control, nausea, elevated blood pressure or psychiatric conditions. Most often, though, the body once again begins to perspire after the offending medications are discontinued -- as long as there aren't any pre-existing genetic factors at play.

Men and women are equally likely to be born with anhidrosis, but when it comes to developing the condition, women are more at risk as they age. Many older adults experience a decreased ability to sweat, but women seem especially likely to have problems perspiring.

Treatment, whatever the age or gender, usually focuses on lifestyle: Staying in an air-conditioned environment when it's hot outside, wearing loose clothing (to encourage air circulation) and avoiding anything more than moderate exertion.