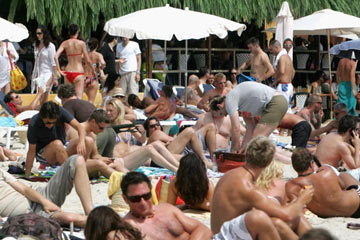 "Never let them see you sweat" is one of those adages that is sometimes easier said than done, especially if the perspiration transforms from beads trickling down your face or neck to visibly irritated skin. Once it escalates to the latter, if it looks like a cluster of red or pink dots (also know as papules if you want to get technical), along with itching or tingling, you're likely dealing with a case of sweat rash.

This extremely common condition goes by a number of aliases -- milaria, heat rash, prickly heat -- but regardless of which term you use, they all refer to the same thing: a fungal skin infection that develops as a result of high moisture content blocking sweat ducts. It's usually localized in specific areas such as under your arms, between your legs, or near the groin. The good news is that it rarely becomes life-threatening, and dealing with it can be relatively easy if you catch it early on and are willing to make some personal adjustments in terms of immediate environment.

In this article, we'll take a look at what causes sweat rash, including triggers that can fuel the fire, as well as recommended treatments to help you beat the heat.

Sweat rash develops as the result of candida (a naturally occurring yeast on found on everyone's skin) reacting to perspiration that's been trapped under the skin, according to the Mayo Clinic. This leads to clogged sweat ducts, which manifest as a rash. There are a number of culprits to explain why perspiration gets trapped instead of naturally evaporating, including:

Sweat rash is more predominant in children and infants, as their sweat glands are still underdeveloped and more prone to rupturing. Newborns who are bundled in too many layers or who experience a high fever are also more susceptible. If this sounds awfully similar to diaper rash, know that diaper rash usually includes very bright red skin with bumps along the outer edges, while sweat rash surfaces as little red bumps or blisters, according to the National Institutes of Health (NIH).

The likelihood of developing sweat rash spikes significantly during warmer seasons, as well as in hot and humid climates.

Whether it's due to heredity, weight, or something else, if you already have a tendency to overheat or excessively sweat, consider yourself more at risk. Intense activities, such as physical labor or exercise, can also lead to this condition. Those who are medically bed-bound for extensive periods sometimes develop excessive sweating as well, especially if they have a fever.

Certain fabrics such as cotton "breathe" more than others like polyester. Wearing something made from a less breathable material can aggravate the condition, particularly if the clothing is tight or damp.

As the Mayo Clinic notes, there are some prescriptions, such as Accutane (used to treat acne) and Adriamycin (used in chemotherapy), where heat rash is among the potential side effects. Heavy lotions can also contribute if they block sweat ducts.

How to Treat Sweat Rashes 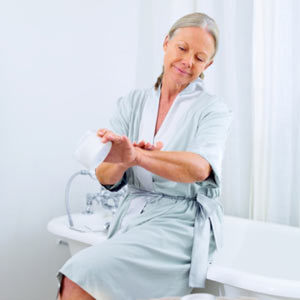 The good news: Most mild cases of sweat or heat rash dissipate on their own, according to the Mayo Clinic and the University of Michigan Health System. However, there are ways to nudge along the healing process and avoid reoccurrences. Here are some tips to keep in mind:

If you are prone to heat rash, avoid sticky situations by seeking out cool or air-conditioned places. This will reduce your likelihood of sweating in the first place. Whenever possible, skip overcrowded, hot places such as summer outdoor concerts and festivals. You should also forgo tight clothing in favor of breathable fabrics and fits, and omit greasy body lotions or gels from your daily routine. These cosmetics can block pores or irritate skin.

What is hyperhidrosis?
What do men find attractive about a woman's smell?
Men: "Play It Safe' With Your Skin