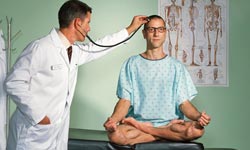 Alternative medicine is not the sidelined, new age world of yoga and therapeutic needles it was once perceived to be. It has become a mainstream, $50-billion health care industry in the United States, from which 74 percent of Americans seek some sort of medical help [source: NCCAM]. Not that yoga and acupuncture are in the past. On the contrary, they're two of the most popular forms of complementary therapy today, offered in thousands of conventional-medicine hospitals around the country.

There are lots of complementary therapies out there, divided typically into broad categories that describe the overall approach or theory behind the treatment:

These are not hard-and-fast distinctions. Some complementary therapies fall into more than one category, like meditation, which is a mind-body therapy and part of a whole medical system known as traditional Chinese medicine.

In this article, we'll find out what each of these complementary approaches entails and which therapies they promote. We'll talk about the five most popular complementary therapies that hospitals offer and what's involved in the treatments. We'll start with another therapy that began thousands of years ago in traditional Chinese medicine: acupuncture.