by Julia Layton
Prev NEXT 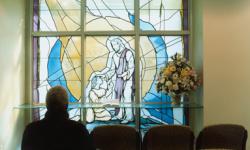 Many hospitals include chapels or places of worship for patients and families.
Brad Wilson/Photonica/Getty Images

The most common complementary therapy in the United States is prayer. More people turn to prayer when they are experiencing health problems than to any other practice [source: NCCAM]. Guided prayer -- not only to a god but also within a general spiritual context -- is just one component of a complementary therapy known as pastoral counseling.

Pastoral or faith-based counseling is offered by most hospitals -- it can be as simple as having a rabbi, reverend, priest and imam on staff or on call in case a patient wants spiritual advice. A hospital might have a chapel in case a patient (and/or patient's family) wishes to pray or just sit in a spiritual place. This group of spiritual treatments can include prayer, spiritual guidance and individual and group therapy. Anyone of any religion, or people who are not involved in any particular religion but are looking for something purposeful beyond themselves, may seek this type of assistance when faced with major medical decisions, and especially when faced with serious or terminal illness.

Pastoral counseling, prayer or spirituality can be viewed in the context of mind-body medicine, since it's based on the idea that a serene mind can help the body to heal and ease pain. Research shows that people who have religious faith tend to be healthier and live longer. This may be due to a reduction in stress associated with prayer, or it may be something more elusive. Between 2003 and 2004 alone, at least 45 percent of Americans used prayer specifically for health reasons [source: NCCAM].

The last of the top five complementary treatments used in hospitals also seeks to cure bodily disease by way of the mind. It's a very common therapy for heart patients, especially.