What is regression therapy? 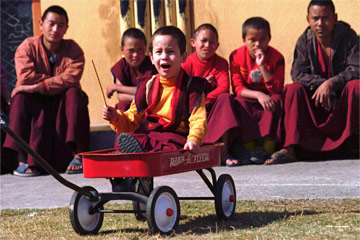 American Buddhist monk, Sonam Wangdu, renamed Trulku-la, is unhappily pulled along at a monastery in Katmandu in 1996. The 4-year-old was believed to be the reincarnation of the high lama Deshung Rinpoche III, who died in 1987.
AP Photo/John Moore

Hinduism and Buddhism are religions of second chances (and third and fourth and … ). After you die, your soul is reborn to correct your past mistakes.This isn't necessarily so in Christianity, where the prevailing belief is you get one shot at life and then after death you're sent to either eternal paradise or the fires of hell.

It's no wonder then that the idea of past lives has captured the imagination of Western culture, particularly as Westerners have begun to move away from devout Christianity and embrace a mixture of different beliefs. In fact, a study conducted by the Pew Forum on Religion and Public Life revealed that nearly 25 percent of Americans believe in reincarnation -- this in addition to the billion Hindus and half a billion Buddhists around the world [source: Pew Research Center].

But more than just a parlor trick or hope for royalty, psychiatrists are using past life regression, or regression therapy, as a way to help people overcome phobias, anxiety and depression -- issues, they believe, which have been dogging us for centuries. The most famous case was profiled in psychotherapist Brian L. Weiss' nonfiction book "Many Lives, Many Masters." The book chronicled a woman undergoing hypnosis for panic attacks who began to reveal her past 86 lives, as well as the spirit guides who helped her along. According to Weiss, connecting with the past cured the patient of her anxieties -- and changed Weiss as well. After publishing the book, Weiss was cast out by the mainstream medical community, but became a legend in regression therapy circles. He now runs seminars and workshops on past-life regression.

People undergo regression therapy for a variety of reasons. Some find that their fear of water, for example, is cured when they discover that in one of their past lives they had drowned [source: Weiss]. Others may be regressed to cope with grief after the loss of a loved one, as it's believed we've shared past connections with friends and family, and will reconnect with them in the lives to come [source: Miller].

Practitioners claim that regression therapy is a safe, low-cost, drug-free way of getting rid of what ails you psychologically. Critics maintain that regression therapy is nothing more than memories suggested by the hypnotist that the patient then perceives as authentic. The "psychic change" doesn't involve any real healing, but has more of a placebo effect. As Robert T. Carroll explained in his book "The Skeptic's Dictionary": " … as a method of healing, it must be apparent even to the most superficial of therapists that there are great dangers in encouraging patients to create delusions."

Catherine Christman, a former writer for the Stamford Advocate, underwent regression therapy for an article on past lives intersecting with past relationships. Here's Christman talking about her experience:

The therapist had me close my eyes … and she told me there was a railroad car on a track. I opened the car door, got in and rode to the end of the track … off to the side, I saw woods. And as I got to a clearing, I knew it was ancient Rome, and I saw my father who was an orator. It didn't look like him, but I knew it was him nonetheless.

She also saw her husband as her husband in two past lives, and her brother today was their son in 1880s Boston.

Christman went on to describe a woman whom she herself had interviewed, who underwent regression after a heartbreaking divorce: "She'd had the feeling she and her ex-husband had been doing the same dance together lifetime after lifetime. And as it turned out, she did have a pattern of pairing up and breaking up with him. So she vowed to break the cycle once and for all."

Though it can be pricey, its followers say the healing benefits of regression are almost immediate. As Dr. Weiss told the New York Times, "You don't need six months of trust," he explained. "This is the fast form."

So whether we are the same soul carried over century after century or we're simply tapping into some deep-seated hang-ups or fears from childhood, the takeaway of regression seems to be this: Learn from your past so you don't make the same mistakes again in the future.

A Former Naturopath Blows the Whistle on the Industry
Oil Diffusers Make Your House Smell Great, but Are They Safe?
What Is the Difference Between a D.O. and an M.D.?