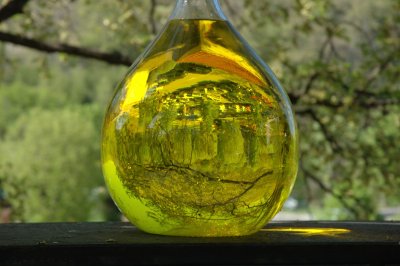 Jim Crossley Liquid perfumes like the kind we know today bear almost no resemblance  to first perfumes, created thousands of years ago.

Perfume as we know it today -- packaged in tiny, expensive bottles with a high alcohol content and hundreds of chemical compounds -- is a relatively new invention.

The first written description of a distiller to produce essential oils appears around the first century C.E. Maria Prophetissa, known as Mary the Jewess, invented a mechanism that looked something like a double-boiler. She described the essential oil it produced as an "angel who descends from the sky." By the second century C.E. the Chinese and Arabs were distilling essential oils, and Japan followed suit a few centuries later.

Prophetissa's inventions could also distill alcohol. Combining it with essential oils and diluting it with water produced a new type of fragrance. These scented "waters" made the body smell sweet and also acted as medicine and cosmetics. When dabbed on the skin, they improved skin tone and diminished blemishes. When taken internally, they relieved indigestion, soothed menstrual cramps, or treated myriad other ailments. Thus was born the "medicinal tonic."

If you have ever appreciated a fine European liquor such as Benedictine or Fra Angelica, you are benefiting from the stills of early monastery infirmaries and herbariums. Many monks and nuns were dedicated herbalists who served as both doctor and pharmacist to their patients. Aromatic waters were one of their favorite prescriptions.

Some sources credit the twelfth century herbalist Saint Hildegard, Abbess of Bingen, with inventing lavender water, which she mentions in a treatise on medicinal and aromatic herbs. However it originated, this aromatic water took Europe by storm. By the fourteenth century, lavender water was so popular that the French King Charles V had lavender planted in the gardens at the Louvre to ensure the supply.

Another famous monastic concoction was Aqua Mirabilis, or "Miracle Water," a water and alcohol combination spiked with essential oils. It was sipped to improve vision and to treat rheumatic pain, fever, and congestion; it was also said to improve memory and reduce melancholy. In addition, it was splashed on the body to improve one's smell. Carmelite Water was prepared by European Carmelite nuns from a secret formula that we now know included melissa (lemon balm) and angelica. It aided both digestion and the complexion, depending upon its use. Modern versions of Miracle Water and Carmelite Water are still sold in Europe today.

In 1732, aromatic waters were further refined into cologne when Giovanni Maria Farina of Cologne, France, took over his uncle's business. Aqua Admirabilis, a lively blend of neroli, bergamot, lavender, and rosemary in grape alcohol, which has a distinct fruity scent, was used on the face and also treated sore gums and indigestion. Soldiers dubbed it "Eau de Cologne," meaning Cologne water, after the town, and the name cologne stuck to all perfumed waters since then. The rumor was that Napoleon went through several bottles a day, an endorsement that made the cologne so popular that 39 nearly identical products were created. A half century of law-suits against these illegal knock-off colognes followed.

After four centuries as the undisputed favorite, Queen of Hungary Water was displaced by Eau de Cologne as the fragrance in most demand.

A little more than 100 years ago, the fragrance industry was suddenly thrust into the modern chemical age. Previously, cologne and even soap had always been considered part of the medicinal pharmacy. Then, in 1867, the Paris International Exhibition boldly exhibited them in a separate section dubbed cosmetics. This radical move birthed an entirely new industry that paved the way for a new product: perfume.

The very next year, the first commercial synthetic essential oil was developed in the laboratory. With its fresh smell of newly mowed hay, the synthetic oil was an instant hit with cologne manufacturers. Thousands of synthetic fragrances, even those imitating the rarest and most expensive essential oils, were engineered mostly from petroleum chemicals.

These synthetic oils changed the character of personal fragrance forever. The new chemicals were so concentrated, they allowed the manufacture of powerful perfumes. Replacing light colognes that were liberally splashed on, just a few small drops of perfume completely scented an individual. Still other newly-invented chemical additives made that scent linger for hours. Of course, with all the synthetic ingredients, colognes and perfumes were no longer medicinal—and certainly not edible. For the first time in history, they were purely a cosmetic product.

Promoted by the newly emerging fashion design world, major perfume houses such as Guerlain, Bourjois, and Rimmel established themselves in France. While the Victorian era had frowned on anything but the lightest scents, styles changed when American soldiers returned from France following World War I, laden with gifts of perfume. The idea of wearing a personal fragrance caught on.

On our final page, you will learn about how aromatherapy has returned to prominence. 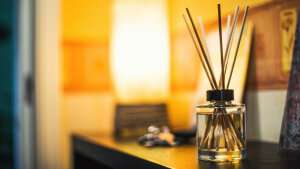 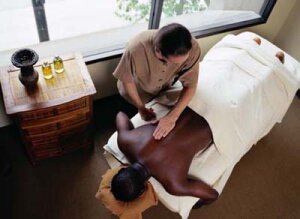 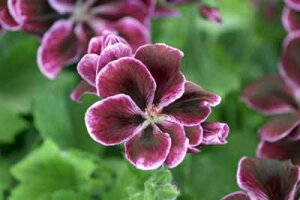