How to Treat Premenstrual Syndrome with Traditional Chinese Medicine 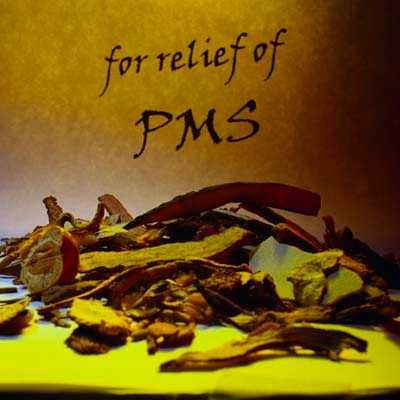 Herbs are an effective way of treating premenstrual [b]syndrome with traditional Chinese medicine.

Premenstrual syndrome (PMS) is a common condition that can be treated with traditional Chinese medicine. PMS occurs in the seven to ten days before menstruation and disappears shortly after bleeding begins. Caused by fluctuations in the hormonal balance of estrogen and progesterone, its symptoms include nervousness, irritability, emotional ups and downs, depression, water retention, and sore breasts.

From the point of view of Chinese patterns of disharmony, all of these symptoms can be traced to a stagnation of liver qi. Since the liver stores the blood and regulates the smooth flow of qi, it is almost always the organ involved in menstrual problems. When liver qi flows smoothly, the menstrual cycle is also smooth.

The classic herbal formula for liver qi stagnation is Xiao Yao Wan. It is taken daily until bleeding begins, discontinued until menstruation is complete, and then taken daily again. This schedule is followed for three or four months; then a break is taken for a month.

If symptoms persist, another three-month course of treatment can be undertaken. This is one of the most commonly prescribed of all the Chinese traditional formulas, and many women have experienced great relief from its use. It is also appropriate for men with symptoms of liver qi stagnation such as nervousness, irritability, and depression.

Acupuncture and moxibustion therapy are also highly effective in treating PMS symptoms. Often, a patient experiences complete relief while still in the practitioner's office. A powerful point known as "Great Pouring" (Liver 3) is often needled with powerful effects. This point can also be massaged by a person experiencing PMS symptoms or simply the stress of everyday life. Although acupuncture relieves acute symptoms quickly, chronic cases usually require two or three months of weekly acupuncture and daily herbal therapy before the condition is resolved.

Dietary therapy involves avoiding all sweets, strong spices such as hot peppers, and stimulants, especially coffee, which heats the liver and can actually cause this condition. Avoiding stress at this time also helps balance the energy of the liver.

40 Amazing Uses for Aloe Vera
What Does Science Say About the Health Benefits of Cordyceps?
What Is the Difference Between a D.O. and an M.D.?