Browse the article Kratom: The Answer to Opioid Abuse or Part of the Problem? 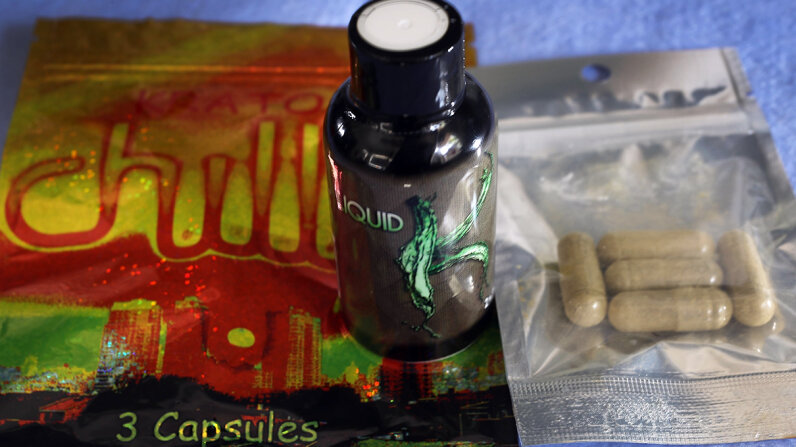 The FDA announced in February 2018 its concerns about the herbal supplement kratom's potential for abuse, addiction and serious health consequences, including death. Joe Raedle/Getty Images

The answer to America's ongoing opioid crisis — or at least a potential part of a possible answer, for some people — may lie in the bitter, broad green leaves of a tropical tree found in Southeast Asia. The plant, Mitragyna speciosa, has been used by many in the region for centuries for its energy-boosting, pain-healing and anxiety-tamping properties.

If you believe the U.S. Food and Drug Administration and the U.S. Drug Enforcement Administration, though, that harmless-sounding plant — known commonly as kratom — is not the answer to the opioid epidemic. In fact, they say, it's part of the problem. A deadly part.

And, so, we now have a faceoff. On one side are those who believe in the power of kratom. They want to drink their kratom tea or pop their kratom pills or chew on their kratom leaves and be left alone. On the other is Big Government, tasked with looking out after the public health of the nation.

Caught in between are some very needy, very sick, very confused opioid addicts just looking for some help.

"I think the current science is far enough along that we can say that the short-term hazards of kratom, for most people, are minimal," Marc Swogger, Ph.D., associate professor in the University of Rochester Medical Center's Department of Psychiatry, says. "And the FDA makes it easier for me to talk because they keep making these extreme statements about it, and if you contrast that with the science ... they just don't make any sense."

The FDA, as far as kratom lovers are concerned, is Public Enemy No. 1 in this controversy. FDA commissioner Scott Gottlieb said on Feb. 6, 2018 that a new study, using a computational model developed by the agency's scientists, "adds to our body of substantial scientific evidence supporting our concerns about the safety and abuse potential of kratom."

This follows reports of sharp spikes in kratom-associated calls to poison centers and the National Institute of Drug Abuse listing kratom among its emerging drugs of abuse.

In his statement, Gottlieb did not mince words, referencing 36 deaths that were "associated" with the use of kratom:

Kratom should not be used to treat medical conditions, nor should it be used as an alternative to prescription opioids. There is no evidence to indicate that kratom is safe or effective for any medical use. And claiming that kratom is benign because it's 'just a plant' is shortsighted and dangerous. After all, heroin is an illegal, dangerous, and highly-addictive substance containing the opioid morphine, derived from the seed pod of the various opium poppy plants.

Further, as the scientific data and adverse event reports have clearly revealed, compounds in kratom make it so it isn't just a plant — it's an opioid.

Well, that sent the kratom folks off the edge. They fear that the FDA's position could lead the DEA to classify kratom as a Schedule I drug under the Controlled Substances Act, making it a federal crime to possess or use the herb. Kratom is now legal in the U.S., but seven states, Washington, D.C., and several counties and cities throughout the nation have banned it.

Not So Fast, Say Scientists

Nine scientists, including Swogger, promptly wrote to the DEA and to the White House decrying the FDA's position. An excerpt of their letter:

We believe strongly that the current body of credible research on the actual effects of kratom demonstrates that it is not dangerously addictive, nor is it similar to "narcotics like opioids" with respect to "addiction" and "death" ...

Equally important, four surveys indicate that kratom is presently serving as a lifeline away from strong, often dangerous opioids for many of the several million Americans who use kratom. A ban on kratom that would be imposed by CSA Scheduling would put them at risk of relapse to opioid use with the potential consequence of overdose death.

According to the National Institute on Drug Abuse, 115 people die every day in the U.S. from opioid overdoses.

"If this is helping people get off of opioids and other pharmaceuticals that people consider harmful, what happens when it's restricted?" Swogger asks. "Do people wind up using heroin? Do we wind up with more overdose deaths? I think it's reasonable to argue that that could happen. In short, this seems like exactly the wrong thing to do right now."

Swogger argues — and he's not alone on this — for government regulation, not criminalization of the drug. That would give researchers more time to study the plant. Right now, Swogger says, studies point to few real side effects from using kratom, though some suggest that heavy consumers of the plant may be subject to some severe withdrawal symptoms.

The biggest point Swogger makes is that more research needs to be done, and putting kratom in with Schedule I drugs — which include heroin, LSD, ecstasy and, yes, marijuana — will have "a profound and pervasive chilling effect on this needed additional research," as the scientists said in their letter.

For many, the verdict already is in, and the FDA's threats are nothing more than another example of the government getting in the way of civil liberties.

Catherine Nieves works in an "ethnobotanical" store in Clearwater, Florida that serves kratom in teas and other forms. She uses kratom, too, to help her manage pain from congenitally bad knees and to help her keep up with her 5-year-old and 3-year-old.

"I work with this plant every day. I see people's lives change positively by this every single day," Nieves, 29, says. "This plant gives me my life ... There are just so many people whose lives have been changed by this."

Now That's Interesting
The DEA, in its 2017 Drugs of Abuse guide, says that, in small doses, kratom — which is actually part of the coffee family — has a stimulating effect and, in larger doses acts a sedative. The agency also says it has psychotic effects and can lead to psychological and physiological dependence. The American Kratom Association, though, cites a study done by a Maryland firm that concludes, after employing the eight factors that the DEA uses to determine if a substance should be scheduled under the Controlled Substance Act, that "[k]ratom has a low potential for abuse and a low dependence liability and there is insufficient evidence of personal harm, adverse health effects or detriment to the public health to warrant control under the CSA."