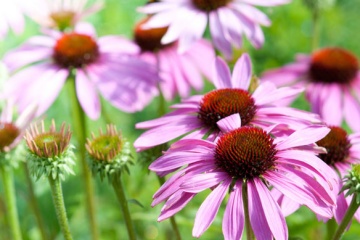 The echinacea flower has long been associated with cold treatment.
©iStockphoto/Thinkstock

When it comes to fighting nonviral infections, echinacea -- an herbal treatment and natural home remedy option -- is usually no substitute for punch-packing pharmaceutical antibiotics. But research does support echinacea's effectiveness for some viral infections -- such as the cold and flu -- because it significantly boosts your body's immune system and helps you to heal faster than you otherwise might.

Compared with some other herbal treatments, we know quite a bit about how echinacea works. In the past 35 years, more than 200 scientific studies have been conducted to determine the herb's safety and efficacy.

Echinacea appears to boost the body's immune response. Unlike a vaccine, which is active only against specific invaders, echinacea stimulates overall activity of cells responsible for fighting any infection that exists in your body.

Unlike antibiotics, which simply kill bacteria, echinacea stimulates the body, at a cellular level, to fight off bacteria, viruses, and other pathogens. In other words, echinacea tells your body to heal itself.

Early on, researchers determined that echinacea has a profound effect on the number and kind of blood cells in the bloodstream. Echinacea works by promoting the production of white blood cells when the percentage is too low and helps them get to where they can fight the infection more effectively.

The main active compounds in echinacea are complicated and fall into several categories. Complicating matters is the fact that there are some differences among the three main species of echinacea used. There is no single "magic bullet" chemical that explains how echinacea works -- it is a combination of many ingredients.

Some of echinacea's chemical constituents also appear to be involved in regrowth of connective tissue that has been destroyed during infection, an action that greatly stimulates the healing process.

When germs get into your bloodstream, they stimulate an enzyme called hyaluronidase to break down the connective tissue surrounding cells. Once these connective tissues have been compromised, germs can easily latch onto the cells and begin the progressive cellular destruction known as infection. But studies in Eastern Europe in the 1960s found that echinacea neutralizes hyaluronidase, so the germs can't get a cellular foothold.

Before a virus-­infected cell dies, it releases a small amount of interferon, which boosts the ability of surrounding cells to resist infection. Echinacea stimulates macrophages to produce interferon and other immune-enhancing compounds, including interleukins, and tumor necrosis factor, which then fight off infections that cause colds, flu, respiratory and urinary tract illness, and other conditions.

The most consistently proven effect of echinacea is in stimulating a process called phagocytosis, which encourages white blood cells to attack invading organisms. Learn more on the next page.

Most herbalists advise taking echinacea in high doses the minute you feel a cold coming on, so your body can ward off the illness before symptoms get a foothold. If you have a sore throat, it is particularly useful to gargle echinacea tincture or juice mixed with water. This quickly reduces pain due to an anesthetic effect.

There's a myth that echinacea loses its effectiveness when used continually. There's no evidence to support this. Indeed, clinical evidence supports echinacea's effectiveness in long-term use.

Even if you do catch a cold, echinacea may help you to shake it off sooner than you otherwise might. During a period of infection, when the body is running low on resources, using echinacea to treat colds has been found to have a strong and direct force on the body's ability to speed healing. In other words, when you're in bed with a cold, your body can use all the help it can get.

The same general results hold true for using echinacea to treat the flu. In one study conducted in Germany, liquid echinacea extract was shown to help ease the symptoms of influenza and speed recovery.

Another study, this one reported in 1978, found that echinacea root was significantly effective in attacking influenza viruses. Another clinical study, in 1992, found that volunteers who took echinacea showed marked resistance to flu viruses.

And volunteers who took echinacea, but who still came down with the flu, exhibited far fewer symptoms than untreated patients.

Every year, millions of people suffer from colds. Fortunately, by following the home remedies and natural treatment options outlined in this article, you can make your bouts with the sniffles more tolerable.

For more information on preventing and treating colds and flu, see the links on the next page.

Getting What You Pay For

When purchasing echinacea, stick to brand names you trust. Otherwise, you can't always be certain that what you're buying is a pharmaceutical grade of echinacea -- or even if the product contains any echinacea at all.

How can you tell? Good-quality echinacea products produce a harmless tingling sensation on the tongue. (To assess a capsule, break one open and taste the powder.) Your best chance of getting the right amount of echinacea lies in choosing products from well-established suppliers.

What Is the Difference Between a D.O. and an M.D.?
Alternative Medicines for Incontinence
Coconut Oil