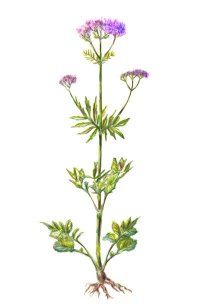 Valerian is a staple medicinal herb used throughout Europe. And, unlike benzodiazepines, using valerian to treat insomnia increases the amount of time spent in deep and rapid eye movement (REM) sleep.

Valerian isn't a modern discovery; doctors of yesteryear were quite familiar with this pungent-smelling herb. In 1831, family physician Samuel Thomson wrote: "This powder is the best nervine known. I have made great use of it and have always found it to produce the most beneficial effects in all cases of nervous affection. In fact, it would be difficult to get along in my practice in many cases without this important article."

It's unlikely that many family doctors today would recommend valerian to their patients. More doctors, however, may consider valerian after reviewing the clinical evidence that supports the herb's use.

In one double-blind study, 44 percent of insomniacs who took valerian described the quality of their sleep as "perfect," and 99 percent said their sleep had improved significantly. None of the patients reported any side effects.

In another experiment, 128 people with sleep problems were given either 400 milligrams of valerian root extract or a placebo (dummy pill). Those who were taking the herb reported significant improvement in sleep quality without morning grogginess.

Another randomized double-blind study had patients with mild insomnia take either a placebo or an extract of valerian root. Subjective sleep ratings were assessed through a questionnaire, and the patients' movements were recorded throughout the night. The study found that those who took valerian experienced a significant decrease in the amount of time it took them to fall asleep. Higher doses of valerian, interestingly, helped subjects to fall asleep no faster than moderate doses, although clinically it has been observed that higher doses may increase duration of sleep.

At least two studies have assessed the effects of valerian in children. One small study of five children with learning disabilities found valerian significantly reduced the amount of time needed to fall asleep while lengthening time asleep and sleep quality, compared to placebo. A larger study of 918 children found valerian safe and effective, although it is important to note there was no control group in this study.

Valerian has even been shown in some studies to improve reaction times. And, unlike benzodiazepines, the herb may be taken with alcohol without causing depression or other adverse side effects. Even with prolonged use of valerian, there have been few reports of symptoms such as heartburn, upset stomach, diarrhea, or allergic reactions. Also, unlike sedatives, valerian does not impair one's ability to operate machinery, such as a car.

Valerian has even been shown to improve sleep quality and to decrease anxiety in people trying to wean off of benzodiazepines. Placebo was far less effective in this study.

How does valerian work?

"According to the latest information available, we simply don't know," concededed the late pharmacognosist Varro E. Tyler, Ph.D, who served as a professor emeritus at the Purdue University School of Pharmacy in Indiana.

We do know that valerian contains volatile oils, alkaloids, and unstable chemicals known as esters. Esters are lost when valerian root is dried and kept for extended periods. For that reason, the herb's effectiveness may vary considerably, depending on the quality of the brand.

Valerian contains chemicals with strong muscle-relaxant and sedative properties called valepotriates. All parts of the plant contain these chemicals, but they are most concentrated in the roots. Ironically, even valerian preparations without valepotriates have helped some people to fall asleep, raising the possibility that some still unidentified chemical, or a reaction amongst various compounds in the root, may produce a calming effect.

Animal studies conducted in the 1960s demonstrated that valerian acts as a powerful tranquilizer, and subsequent studies with humans replicated those effects. Valerian appears to work by affecting the central nervous system.

Researchers monitored electroencephalograph (a device that measures brain-wave activity) changes in rats that had been given a valerian preparation. They found significant sedative activity, recorded as an increase in brain waves associated with relaxation.

In another study, a tincture of valerian root was given to 23 hypertensive men. The preparation had a distinct tranquilizing effect, as measured by subsequent brain-wave activity.

Melatonin is another natural substance that may be used to treat insomnia. Continue to the next page to learn more.

ABOUT THE AUTHORS:Timothy Gower is a freelance writer and editor whose work has appeared in many publications, including Reader's Digest, Prevention, Men's Health, Better Homes and Gardens, The New York Times, and The Los Angeles Times. The author of four books, Gower is also a contributing editor for Health magazine.Alice Lesch Kelly is a health writer based in Boston. Her work has been published in magazines such as Shape, Fit Pregnancy, Woman's Day, Reader's Digest, Eating Well, and Health. She is the co-author of three books on women's health.Linnea Lundgren has more than 12 years experience researching, writing, and editing for newspapers and magazines. She is the author of four books, including Living Well With Allergies.

A Former Naturopath Blows the Whistle on the Industry
What Is the Difference Between a D.O. and an M.D.?
What Does Science Say About the Health Benefits of Cordyceps?