Do gaps in baby teeth mean anything?

Browse the article Do gaps in baby teeth mean anything? 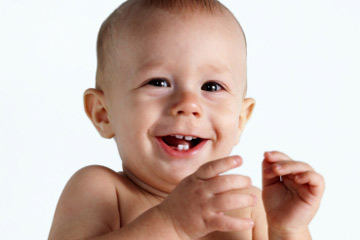 Lots of famous people have a gap in their teeth. Does it mean anything if your baby's teeth are gapped?
iStockphoto/Thinkstock

Teeth are both functional and cosmetic. They help us talk, eat and smile. They're also a sign of health and wellbeing, and the same holds true for baby teeth. A child's temporary primary teeth, or baby teeth, are vital for development. So it's no wonder that as a infant's first set of teeth begin to emerge from under the gums (usually between 6 to 12 months of age), parents will peer into their little one's mouths and hope those itsy bitsy pearly whites are growing correctly -- a process that began many months before they were born [source: American Dental Association].

Baby teeth start forming while the fetus is still in utero. In fact, every newborn has a complete set of baby teeth underneath their pink, tender gums. Their full set of primary teeth, comprised of 20 chompers in all, should be fully visible by their third birthday to help them with chewing, talking and even reserving space in their mouths for their future adult-size teeth [source: ADA].

Not to state the obvious, but since baby teeth are small and less numerous than adult ones (adults should have 32, including wisdom teeth), it's not unusual for gaps to occur between them [source: Shenkin]. This sometimes leaves parents wondering whether the gaps in their baby's teeth mean anything and whether this means their gap-toothed infants will grow to become gap-toothed teenagers and adults. Though the best way to ensure the health and wellbeing of your child's teeth is by visiting a dentist, do keep reading to learn more about the spaces between your baby's teeth and what they really mean.

So what's the deal with all that space? "When a child's first teeth begin emerging from their gums, it's actually considered pretty normal for spaces to occur in baby teeth," says Dr. Jonathan Shenkin, a pediatric dentist at the Boston University School of Dental Medicine, adding that the gaps are found in about 40 percent of kids. This spacing does not cause problems -- in fact, these spaces are great. They give the permanent adult teeth room to grow in, and this is good news since it also means that the permanent adult teeth will likely not be crowded, helping alleviate the need for costly braces [source: Haugseth]. Still, some children do grow up with a noticeable amount of excess space between their adult teeth, though this is not very common.

But, let's get back to baby teeth. With all this space between the teeth, many parents may feel they can forego flossing and just stick to brushing. But, dentists suggest that flossing should start early, especially between the back molars.

If you're wondering whether these gaps are referred to as primate spaces, the simple answer is no. Primate spaces occur between the baby eye teeth (also known as canines since they look like fangs) and the first baby molar (sometimes called the one year molar) behind it, and usually go unnoticed [source: Haugseth].

Using information from the American Dental Association, we can expect the following timeline:

So what are your options?

The Gap Up Front

"If this band of tissue is broad and positioned low on the gums (close to, or between, the upper front teeth) it can cause this space," writes Dr. Rhea Haugseth, president of the American Academy of Pediatric Dentistry [source: Haugseth]. "If this tissue is the cause, most likely the permanent front teeth will also have this space."

An evaluation by your child's dentist will give you the options for treatment. However, it's best to wait until adult teeth erupt in [source: Shenkin]. Once this occurs, one option is to undertake a frenectomy [source: Dental Health Index] to reduce the tension and, in theory, cause closure of the space between the front teeth. This procedure involves snipping the tissue between the gums and the teeth. The surgery itself is fairly short and simple and can be undertaken in 10 to 15 minutes by a dentist or orthodontist, but it may take a few weeks to completely heal. Braces are the common solution for any other spaces that may occur between permanent teeth.

Ready to book your next dentist appointment? We've got lots more information on the next page.