Can you straighten your kids' teeth without braces? 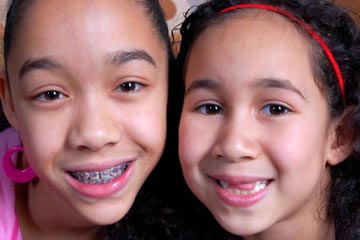 Is there an alternative to heavy metal?
iStock/Thinkstock

A beautiful smile can go a long way toward boosting confidence, especially among teens. But with the average cost of orthodontic treatment ranging from $3,000 to $7,000, not to mention the awkward appearance of traditional orthodontic appliances, it's no wonder that many parents wonder if they can straighten their kids' teeth without braces [source: Konrad]. The answer mainly depends on just how much orthodontic work your kids' teeth need. In this article we take a quick look at how traditional braces work and review some of the alternative options for straightening teeth.

Traditional braces work by applying low level pressure on the teeth over time, which moves them into the desired position, according to Dr. Allena Willis Kennerly, orthodontic specialist at Smashing Smiles in Washington, D.C. The braces themselves consist of brackets -- usually made of metal, ceramic, or plastic -- that are bonded directly to the teeth and held together with wires, elastics, and springs that control each movement.

Traditional braces are a very effective method of straightening teeth, but there are also some downsides. Perhaps the most important of these is the "metal mouth" appearance of these appliances. There are also some practical considerations with wearing braces, including discomfort in the early weeks of treatment, difficulty eating and problems keeping the teeth clean, though these issues usually resolve over time.

Now that we've covered the basics about braces, let's take a look at some other options. By far the most popular alternatives to braces are clear plastic removable aligners such as Invisalign, according to Dr. Willis. A major advantage of clear appliances over traditional braces is that aligners are invisible. And because they're removable, aligners are easy to clean and don't get in the way of a patient's oral hygiene, says Dr. Sheila Samaddar, a dentist at South Capitol Smile Center in Washington, D.C. However, the removability of aligners may also be a downside. Many patients lose their appliances or simply forget to use them.

Part of the reason aligners have become so popular in recent years is that the technology has continued to advance since their debut in the late 1990s [source: ArchWired]. These days, most aligners are computer-generated appliances created using images, impressions and X-rays of a patient's teeth. Individualized treatment plans for aligners usually include a series of at least 24 different aligners to be worn consecutively, each of which advances the teeth about 1.2 mm toward their desired position. Treatment time is about the same as for braces [source: Invisalign].

There are several other alternatives to traditional braces. In some cases, a simple retainer would be enough to straighten teeth that are only slightly misaligned. Other quick fixes include contouring, which involves shaving off thin layers of the enamel on the tooth, or veneers. Known as the "Hollywood Smile," veneers are made of a thin layer of porcelain that is permanently attached to the teeth, giving them a perfect appearance. Contouring and veneers are only effective in patients with slight misalignments.

The extent of each patient's orthodontic need depends on several factors, such as the degree of misalignment in your teeth, the shape of your palette, your dental history, and your child's ability to comply with doctor's orders. Keep in mind that while a general or family dentist can provide a lot of advice about straightening teeth, only an orthodontist can provide a complete evaluation of your child's needs and teeth straightening options.

What are smart bracket braces?
Can dentists use non-fluoride toothpaste?
Does Biotene cure dry mouth?